Back to Profile Gallery > Gulf Island Shrimp and Seafood 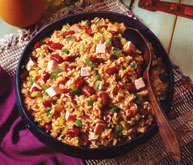 Some cultures are very particular about their food. For a company to win over the distinguished taste buds of a group where many were raised to be amateur chefs is no easy feat. But when it comes to Creole, Cajun and other Louisiana-based foods, that’s exactly what the team of French Market Foods has done.

Based in Lake Charles, La., French Market Foods is the prepared-foods division of Gulf Island Shrimp and Seafood, which is one of the largest providers of wild-caught Gulf Coast shrimp. Recently, the company made a move to brand all French Market Foods under the name Big Easy Foods – a reference to a New Orleans nickname.

Co-owners Larry Avery and Mark Abraham started Gulf Island Shrimp and French Market in 1998. Avery’s story of his start in the food industry is a credit to the value of just plain business savvy. Prior to his current business, Avery owned an environmental engineering company with 12 different offices throughout the country. Abraham owned a small producer of boudin – a specialty sausage – and asked Avery to join.

“My partner, Mark Abraham, was in the food business, and he had a dinner sausage company and asked me if I was interested in giving a hand to growing the company,” he says. “We were involved in other business ventures together. I decided to come in as a partner, and together we run the business and have acquired small companies to grow into a large national business.”

“The turducken is a holiday thing, but it’s also for gathering events,” Avery explains. “It’s become very popular, and we are seeing a continued growth of about 25 to 30 percent growth in that part of the business. This year we will do about 85,000 turduckens.”

Despite the BP oil spill in the Gulf of Mexico last year – which Avery says the company has almost completely recovered from – the nation is still demanding shrimp from oceans near U.S. borders. Gulf Island Shrimp and Seafood, French Market Foods’ parent, is one of the largest domestic shrimp processors in the nation, offering peeled and cleaned shrimp. “Our second-most-popular item is the Gulf shrimp,” Avery says. “The awareness of good-quality wild-caught shrimp from the Gulf is increasing as people turn away from foreign farm-raised products.”

Since entering the food industry, Avery and Abraham have acquired 10 food companies, with a possible 11th on its way this summer. The partners’ ability to quickly bring new companies into the fold is where their business savvy has proved particularly useful. They make sure that each purchase can bring something new to the company.

“If you took our company and made a circle, what I look for is the overlap,” Avery says. “If a company is doing some of the things we are already doing that’s great, but if they are only doing the same things we already do, I’m not interested. If they are able to bring additional equipment, technologies or products to us, then we will have interest in acquiring. That way, our circle can become bigger and much better.”