Back to Profile Gallery > Hamilton Meats and Provisions 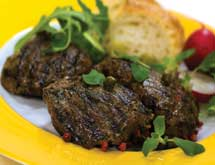 For Hamilton Meats and Provisions, “going green” is more than just a slogan; it’s the defining part of its business. The meat distributing company works to provide the safest, most environmentally friendly, all-natural, locally grown organic meat products to its base of customers in the hotel, restaurant and retail industries.

Hamilton’s commitment to the environment extends beyond its products into every facet of its operation, including production and, eventually, distribution, owner Mick Hamilton says.

“Our base is clearly people or customers that will appreciate the products we carry,” Hamilton says. “We are solely going after people who are looking for natural, organic, sustainable raised meats.”

Hamilton says his company differentiates itself through being extremely quality-driven and having a high ethical standard.

“We think our market is starving for news items and new products,” he says.

The company’s 30,000-square-foot plant in San Diego was built using the U.S. Green Building Council’s LEED principles. A LEED-certified designer along with designers from San Diego Gas and Electric planned the building, which includes a number of environmentally friendly features aimed to keep energy costs low. Hamilton is in the process of submitting the building for LEED gold certification status. The plant was completed in 2009.

Workers there process, cut and package the meat brought in from local farms. Orders are taken six days a week and shipped out one day after they’re received, Hamilton says.

“We used everything from green insulation to green carpeting, paints and skylights,” Hamilton says. Future plans include using solar panels on the plant’s roof, he adds.

One key feature is the plant’s refrigeration system, which Hamilton calls the most energy-efficient on the market. The system uses 10 percent of the electricity of most similar systems.

“One of our commitments is to have the smallest carbon footprint we can,” he adds.

Environmental awareness doesn’t end at the plant for Hamilton. “I only bring home what I feel is the safest meat,” he says. “What we carry is all my family eats.”

Hamilton Meats prides itself in carrying locally raised beef, pork, lamb and chicken products. One major vendor is Brandt Beef, a southern California producer. The family-owned company owns its own land and does not use cattle growth hormones or chemicals such as pesticides on its farms.

“Instead of using pesticides, they use ladybugs and burrowing owls [to manage insects],” Hamilton says. “It’s a safe, clean product and very high quality.”

“I feel this is the right way to go and it’s a healthy alternative; also, the sustainable farms we buy from practice humane [animal] handling and are conscious of the well-being of their animals,” Hamilton continues. “Having a relationship with farmers is different from buying from large companies. We’re buying from farms that have a vested interest in knowing every step of the way how their product is being handled and what the outcome is.”

“I’ve done every job there is to do here,” he says.