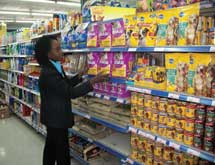 Surviving 90 years is an accomplishment for any company. During 90 years, most companies will have survived at least one cataclysm – a flood, fire, earthquake or other natural disaster. In the case of grocery distributor Hand Arnold Trinidad Ltd., the company survived an unnatural disaster.

“In 1990, there was an attempted coup in Trinidad, which failed,” CEO John Hale says. “While that was going on, the police services held back a bit. There was a lot of looting taking place, and our warehouse was looted for three days.” Unfortunately, the company’s insurance did not cover such a man-made disaster.

“A lot of companies went bust after that,” Hale continues. But Hand Arnold Trinidad Ltd. did not, thanks to the support of the companies – or “principals” – whose products Hand Arnold distributes. “Because of the stock loss, we were actually insolvent on paper for a very short period of time,” Hale concedes. “One hundred percent of our principals gave us a year to repatriate whatever we owed them, and all of them continued shipping to us on full credit. That’s a huge testament to the respect they had for our company and the confidence they had in us.”

The company had to sell every non-productive asset it had to help manage cash flow. The local bank eventually only lent it approximately 25 percent of the loss. “From then on, we just cut to the bone, and the next year was the most successful year in company history,” Hale maintains. The debts to principals were paid in monthly installments and repaid within a year, and expenditures were watched carefully after that. “From there, we never looked back,” he says – except to buy insurrection insurance, which had then become available.

The reason so many of the company’s principals rushed to its rescue after the looting is in part due to the passion with which Hand Arnold promotes their products and the strong relationship it has developed with them over the years.

“Our vision statement, ‘We deliver superior satisfaction to our family of stakeholders – that’s our promise and that’s your guarantee,’ epitomizes what Hand Arnold is about,” Hale pledges. “What’s different about what we have are our staff and people, and the passion we have for the organization and the brands we carry.”

Hand Arnold handles products from more than 50 companies. Roughly 10 are local brands that residents of Trinidad and Tobago have known all their lives. For most brands, Hand Arnold is the sole distributor in the territory. “We’re not a wholesaler who just buys from somebody in Miami,” Hale emphasizes. “We deal directly with the manufacturer or brand owners. We set up a contract with them. There are one or two cases where we may co-distribute with someone else, but that is an exception.”

These exclusive arrangements breed brand loyalty at Hand Arnold. “We really do have passion for the brands we carry – we treat them as though they are our own,” Hale emphasizes. “As a testament to this, we still handle a few brands which we have distributed since 1920.” Among these are a powdered milk now owned by Nestle named Klim – “milk” spelled backward – Heinz ketchup and Five Roses Flour, a Canadian brand now owned by Smuckers. “Sometimes we have taken losses on a temporary basis just to preserve the brand,” Hale maintains. “We consider our primary customer to be our principal.”

Although variety is appreciated on the islands, there is strong support for local brands. “It’s very difficult to introduce a new brand into the country unless you really have something big that you can talk about, a really good price or superior quality,” Hale maintains.

Salespeople are split into teams of three or four to handle small groups of brands instead of individuals handling many brands in a few accounts. “We have developed our business around that principle – that we give the brand focus by making sure nobody handles too many SKUs,” Hale relates. “We visit the grocery stores ourselves, so all our advertising and promotion is geared toward the final consumer.”

Promotional arrangements vary by principal. “In some cases, we do our own advertising and brand development,” he reveals. “In other cases, the principal does all the advertising, and in other cases, it’s split between us – they may provide some money, and we get it all done. We do what satisfies them the most. We carry out a lot of in-store promotions and displays, and we do both wine and food sampling in stores.”

Because the bulk of Trinidad’s revenue comes from natural gas and oil, and the country attracts many suppliers, competition is stiff. “It is extremely competitive – I’m sure it is the most competitive territory in the Caribbean,” Hale asserts. “Everybody is trying to outdo the next guy. Margins are a bit tight. It’s a tough business – you can’t just relax and let it happen. You have to keep at it all the time.”

Hand Arnold has approximately 10 major competitors, but Hale estimates up to 50 smaller distributors compete against some portion of his business. “They may just have one or two brands – but they get their noses in those businesses and are very price-competitive,” he explains.

One principle Hale continually emphasizes to his staff is keeping store shelves stocked with their principals’ products. “If that image is driven down to all our staff, it affects how they think about things, even the person picking the goods in the warehouse,” Hale stresses. “If they do not pick correctly or leave out certain items, it means the product is not going to be on the shelf, and so we’re not getting to our ultimate objective.”

The same is true of those buying products or entering data, he says. Mistakes have a very physical result – empty shelves. “We try to make people very much aware how their job fits into the whole picture,” he emphasizes.

The company was founded in 1920 by two Canadians, whose surnames, Hand and Arnold, form the name of the company. They opened branches in Bermuda, Trinidad and Jamaica, and when they died, the branch managers had the opportunity to buy the businesses. Hale’s grandfather, Arthur, bought the Trinidad branch in 1945 and retained the name.

Arthur’s son Osmond, John Hale’s father, ran the business from 1966 to 1984, after which his brother, J. Peter Hale, became CEO. Peter retired in 1995 as CEO, and John Hale became CEO. In 2008, the company was sold to Agostini’s Ltd., a local publicly traded conglomerate.

“People really enjoy working with us,” Hale asserts. “It has a very family-like atmosphere and an open-door policy. Employees have a say in what is going on. On the other hand, it is a very fast-paced working environment. So if you really want a challenge, you’re going to get one when you work with us. There’s always something new going on. I think people do enjoy that kind of environment as well.”

Hale is optimistic about the future of the company. “Now being owned by a larger company will help us facilitate growth and development,” he says, while conceding that consumers currently are cautious in their big-ticket purchases because of the slow energy economy. “But the oil and gas economies of the world will start to grow again, and when they do, our country will be part of that growth,” Hale insists.