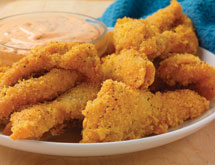 Catfish has been a popular food for hundreds of years in North America, Europe, Asia and Africa, often grilled or fried. It is considered a delicacy in some cultures and many value it for its health properties. But not all catfish is created equal, and Haring Catfish Enterprises strives to bring the very best to the market. Since its inception in 1954, this family business has been cultivating the highest standards in catfish farming, promising a delicious product that ensures repeat customers.

The history of Haring’s Catfish dates back to 1954 when Pete Haring moved to Sicily Island, La., and bought a gas station. As part of his business, Haring began selling minnows that he collected from roadside ditches and in 1956, he became the first person to raise minnows commercially. This business – Wisner Minnow Hatchery Inc. – is still in operation today.

Haring’s business continued to grow, and in the early 1960s the company hatched its first crop of catfish fingerlings. By 1970, it was farming more than 700 acres of catfish and later that year it opened its first processing plant with a capacity to process 25,000 pounds per week.

The capacity of the first processing plant was not enough to keep up with market demand, so Haring’s Catfish began expanding in 1982. The company opened its own feed mill – Topwater Feedmill – in 1989, which enabled it to control the diet of its catfish. It created a high-protein feed that involves a mixture of soybeans, corn, wheat, cotton seed meal, vitamins and minerals. The company explains its feed floats, which causes its fish to come to the top of the water and gives the catfish excellent flavor.

Haring’s Catfish now has two facilities, which allows it to process more than 300,000 pounds per week. Additionally, its quality is well-documented. In addition to having won the Louisiana Catfish Farmer of the Year Award, Haring’s Catfish also has won the Catfish Farmers of America Award of Excellence and the Small Business Person of the Year Award by the U.S. Small Business Administration.

U.S. Quality
The dedication to quality that Haring’s Catfish has maintained has been key in its ability to remain competitive in the industry, especially as the American market has struggled against Asian imports. According to the U.S. Department of Agriculture, catfish processing is down 32 percent from last year nationwide, and Louisiana, Mississippi, Arkansas and Alabama have all reduced the number of acres they have in production. In Louisiana, total acreage for catfish production has dropped from 12,100 acres in 2002 to 2,000 acres last year.

As a result of price pressures caused by imported catfish, the Catfish Farmers of America (CFA) is pushing for legislation that requires country-of-origin labeling on restaurant menus. “We feel if people are given the choice and are correctly informed, they will prefer and demand U.S. farm-raised catfish,” CFA Chairman and President Joey Lowery said in a statement.

A recent federal audit, however, found large gaps in oversight of country-of-origin labeling laws by state officials who are responsible for reviewing retailers for compliance. The audit also found a lack of enforcement by federal personnel who receive state reports. The Catfish Institute says the origin of about eight percent of examined foods in grocery stores is mislabeled, and many retailers violate country-of-origin-labeling laws because federal officials do not investigate and discipline offenders.

Labeling is important because there also is a question of quality regarding Asian imports of catfish. Haring’s Catfish is dedicated to the highest quality standards, regulations and inspections to protect American consumers when it comes to catfish – both imported and domestic. In fact, in recent years, the Alabama Department of Agriculture & Industries has put a halt on the sale of imported Asian catfish and related fish because much of the product was contaminated by drugs banned by the FDA, according to the CFA.