Back to Profile Gallery > Heart of America Group 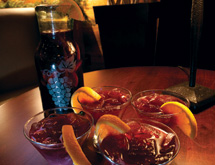 Ask Michael Whalen, CEO of Heart of America Group, why he got into the restaurant business in 1978, and he’ll explain it mainly was to take a failed restaurant off his lawyer father’s hands. “My dad did some residential development and a little bit of commercial development, and he owned this restaurant building called Yummy’s,” Whalen recalls. “Soon, it became known as Crummy’s, and that guy went broke.”

Whalen’s father couldn’t rent or sell the restaurant that was in an isolated, inconvenient location a short distance from I-80 in Davenport, Iowa, so Whalen – a recent graduate of Harvard University’s law school – offered to open a restaurant there. “I took the bar exam on Monday through Wednesday and opened the restaurant on Friday,” Whalen remembers. “I did pass, by the way.”

Nevertheless, he found the restaurant business exciting. “My first job was a salad boy at 14, but I never worked in a restaurant,” Whalen concedes. Ten years later, Whalen would find himself owning and operating his first restaurant. “I had no idea what I was doing – I was totally clueless. The advantage was I was 24 years old and in good health. I had a decent head on my shoulders and worked 17 to 18 hours a day to figure it out.”

That was the first Iowa Machine Shed restaurant. Opened in 1978 with 100 seats, it now has 350 and is one of six locations in Iowa, Illinois, Wisconsin and Minnesota. Heart of America Group also is franchising its Johnny’s Italian Steakhouse, named after a shuttered restaurant in Iowa that Whalen loved. It also developed and owns Thunder Bay restaurants featuring steaks, seafood and Cajun entrees, Gramma’s Kitchen and Checkered Flag Bar and Grille.

Home Cooking
The slogan of the Machine Shed restaurant is “dedicated to the Iowa farmer.” But “now we have sheds in other states,” Whalen points out. “Basically, it is comfort food done very well from scratch.” Whalen is amazed how Americans’ knowledge of food has grown.

“When I first opened, we did our own mashed potatoes, and every day I had people asking me what the little lumps were,” Whalen recalls. “Some people had never eaten real mashed potatoes – only the stuff out of the box. We really brought it back to the way it was done back when people actually bought ingredients at grocery stores and cooked.”

When he started, Whalen had more pork on the menu than other restaurants. “Everybody at that time 35 years ago cooked pork to death,” he remembers. This was because of their concern about contracting trichinosis from the pork. Customers would argue with him that he had undercooked the pork.

“It was pork done well, not just pork well-done,” he says.

Nowadays, he is amazed at how much people know about food and how young people are interested in food preparation as a career. It was not like this when he started in the business. “It wasn’t a very glamorous profession,” Whalen insists. “You were either a fancy chef at the Waldorf Astoria or you were considered a cook. If you would have told me people would watch a 24-hour food channel religiously and that chefs were going to be rock stars, I would have said, ‘No way.’”

Hotel Development
Whalen got into the hotel construction and management business when a motel next door to his original Machine Shed restaurant fell on hard times. “Frankly, it was becoming a flophouse next to my wholesome, award-winning family restaurant,” Whalen recalls.

So he rebuilt it as a Comfort Inn. “What you’re seeing is some of the hotel chains have given up on food, and instead, they’re going to do these grab-and-go concepts, almost a little like a convenience store,” Whalen observes. “I choose to go the other route. If I’m a full-service hotel, first and foremost, I’m in the restaurant business, and second, I’m in the renting beds business.”

Whalen opened his second Machine Shed in Urbandale, Iowa, near Des Moines and has kept opening them and other restaurant and hotel concepts throughout the Midwest. Heart of America Group’s next project is a new six-story Holiday Inn with 100,000 square feet of retail space in Davenport.

In Altoona, Iowa, the company plans a larger retail space that will be more of a regional mall. Heart of America Group has two architects on staff and works with a design group, and it acts as construction manager on all its projects. “We design it, we build it and we operate it,” Whalen stresses.

“The days when I would go to Appleton, Wis., to put a Machine Shed there and have one sitting by itself, that’s not really the model we’re going to do,” he announces. Now his niche is to create a campus with a restaurant, an upper-middle to lower high-end hotel and retail. The hotels he now is building are aiming for at least LEED Silver certification.

Heart of America Group also is including a full-service fitness club in its new hotels. “I think food along with fitness is going to be the differentiator going forward in the hotel business,” Whalen predicts. He selects sites with an eye toward their futures in 20 to 30 years. “We want to be the dominant player,” he says. “We want to be the place to go for hotel and hopefully as well as food and beverage.”