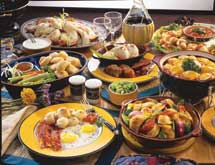 Heritage Frozen Foods Ltd. – maker of CHEEMO® pierogies – has earned a leading position among pierogie producers thanks to its commitment to innovation, efficiency and customer satisfaction, says Taylor Johnson, director of national sales. According to AC Nielsen data, he notes, Heritage Frozen Foods produces four of the top-10 dinner/entrée items within the western Canada grocery category.

When Walter Makowecki founded Heritage Frozen Foods in 1972, he believed a family of four should be able to enjoy a healthy meal for under $5. Nearly 40 years later – with his son, Joe Makowecki, at the helm as president and CEO – the Edmonton-based company stands by that belief. Despite inflation, market fluctuations and one of the most damaging recessions in our lifetime, it proudly continues to feed families of four a nutritious meal for under $5.

Heritage Frozen Foods has been able to produce high-quality pierogies at lower price points for decades by continuously updating its production process, Johnson explains. In the past few years, the company has invested nearly $5 million in new equipment to allow it to produce its pierogies more efficiently and cost effectively. Today, Heritage Frozen Foods produces more than 3 million pierogies daily, but it has the capacity to manufacture twice that amount, Johnson says.

“We are strictly a pierogie company with one of the most advanced production facilities,” he remarks. “We are constantly mulling over ways to im­prove our production and packaging, and we continue to make yearly investments on equipment.

“There is very little waste within our production process,” he adds. “This has made us more efficient and allows us to keep our pricing down to provide value for the consumer.”

Despite its knack for frugality, Heritage Frozen Foods never skimps on quality. According to Johnson, it is particular about its ingredients. “We are a big supporter of using natural ingredients such as fresh potatoes blended with real vegetables, quality cheese, natural spices and our special flour blends,” he asserts. “To us, quality ingredients, a state-of-the-art production facility and a positive work environment lends itself to producing and supplying a quality product for all consumers.”

Heritage Frozen Foods stays fresh in the marketplace by keeping its eye on consumer trends. “We’re innovative,” Johnson describes. “We are constantly looking at new products and new flavors. Consumers as a whole are looking for better-for-you products, but at the same time, they’re looking for value-added products. So, one of the products we recently launched is a 100 percent stone-ground, whole-wheat pierogie with a three cheese flavor.”

Its whole-wheat pierogie made Heritage Frozen Foods a finalist for the 2010 Canadian Grand Prix New Product Awards to be held at the Canada Retail Council gala event in Toronto in June. “There are five criteria they judge you on – uniqueness and innovation, product characteristics, presentation packaging, overall consumer value and consumer acceptance,” Johnson says.

Despite the struggling economy, Heritage Frozen Foods has seen sales grow approximately 5 percent year over year, Johnson says. “[Granted], consumers are a little more price-conscious nowadays than they were five to seven years ago, and you can see that,” he remarks. “When something is on special, they have a tendency to buy more of that. So, to a degree, it has affected some companies. But because of the value, quality and convenience [we provide], it hasn’t affected us as much as other people, if at all.”

Approximately 70 percent of its business is in retail – some of which is private label – and the remaining 30 percent is foodservice. Both sectors are growing, Johnson says.

“We’re always targeting new markets, whether foodservice or retail,” he explains. The company continues to pursue new restaurants and customers in the hospitality industry.

Plus, because “our product is good for consumers,” its pierogies are an ideal fit for schools, he adds.

Heritage Frozen Foods continues to expand geographically. The company maintains a strong presence in western Canada and continues to grow in Ontario and the Maritimes. “Many of our valued customers – which include Federated Co-operatives, Sobeys, Safe­way, Metro, Walmart, Overwaitea Foods, Loblaw, Quality Foods, Sysco and GFS – have supported us for nearly 40 years, and we thank them for that,” Johnson says.

The company’s products also are available in the northeast and southeast United States at retailers and wholesalers such as Wegmans, Harris Teeter, BI-LO, Ingles, Food City, Merchants Distributors Inc. and smaller independents. Additionally, Heritage Frozen Foods does a great deal of business within the foodservice sector with various companies, such as Sysco, U.S. Foodservice and Honor Foods, but there is ample room to grow.

“We will analyze a particular market to see if it’s worth going into and make our decision based on the data we’ve obtained,” Johnson states. “If it makes economical sense, we would certainly entertain the idea of going into a different market.”

Heritage Frozen Foods’ family ownership has been the driving force behind its growth. “As a family owned business, we have more flexibility to do what we need to do in order to become more efficient,” Johnson says.

It also creates a more collaborative working environment, he adds. “It’s a place where you want to come to work, and you want to strive to achieve the best for the company because [Joe Makowecki] treats you like family,” says Johnson, who joined Heritage Frozen Foods five years ago.

“He gets everyone involved in the whole process of running the company. He hires people that he feels can run each particular division, whether it’s operations or sales, because he has trust and faith in his people to do so.”