Back to Profile Gallery > Heroes Vodka 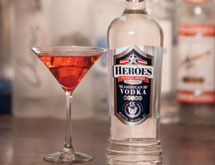 On a fall Saturday in the small Tennessee town of McMinnville, U.S. Marine Corps veteran Travis McVey hugs his 11-year-old son Logan, climbs into his ’85 Honda Accord and begins an hour-long drive to a promotional bottle-signing at a regional liquor store. Although the hills of eastern Tennessee are a long way from the bright lights of Hollywood or the fast pace of New York’s Madison Avenue, that’s just fine with McVey, who’s fulfilling a personal dream of supporting U.S. veterans.

Now, as the founder and “chief veteran officer” of Heroes Vodka, McVey is well on his way to building a nationwide “100-percent American” premium vodka brand with a unique position in the crowded spirits marketplace. “I wanted to create a product that would give back to veterans in honor of all the brave men and women who have served our country,” McVey says. “In a world full of celebrity-endorsed products, Heroes Vodka is a brand for real Americans. It’s an excellent product with great taste – plus the sale of every bottle helps our American heroes.”

Where It All Began
After two of his fellow Marines died in the line of duty, McVey began thinking about ways to honor their memory. Then he came up with a fresh idea on Memorial Day 2009 while talking with his friends at VFW Post 1291. “I was looking at the bar and I started thinking,” McVey says. “Even though there are more than 20 million veterans, I wasn’t aware of any veteran-owned spirit companies. So, I decided to develop an American vodka and use the proceeds to help veterans.”

Since McVey was employed full-time at a large manufacturing company, he began using his free time to research the liquor industry, military markets and the growing “Buy Veteran” movement. He spoke with a trademark attorney, obtained the intellectual property rights to “Heroes Vodka,” and then contacted industry veteran Robert Lipman.

“I got a call one evening from this eager young man who said he was looking for some advice,” says Lipman, 60, as he recalls his first conversation with McVey. “He was a Marine who served as a presidential honor guard for President George H.W. Bush. He had trademarked Heroes Vodka and wanted a portion of all sales to go back to veterans. That really resonated with me, as my grandfather was a veteran.”

When McVey presented his Heroes Vodka proposal – complete with detailed facts, figures and findings related to the military and spirits sectors – Lipman was intrigued. As a successful entrepreneur who had been sitting at the helm of the oldest distributor of wine and spirits in Tennessee for nearly 30 years, Lipman receives hundreds of requests a year. But McVey’s proposal connected on a deep level, and he decided to buy in.

Lipman advised McVey that Heroes Vodka would need to have a strong value proposition with unique, upscale packaging. Most importantly, the vodka needed to have exceptional taste. In keeping with that advice, Heroes Vodka is made from 100 percent American corn, and each handcrafted batch is distilled four times to create an ultra-pure, “slightly toasty and roasted” flavor.

With that ultra-smooth distilling process in place, the first vodka made by a veteran for other veterans was bottled on Veterans Day – 11/11/11 – at the Buffalo Trace Distillery in Frankfort, Ky. “The goal was to offer the best-tasting vodka in America,” Lipman says. “We canvassed a number of distilleries around the country and selected one that met our taste criteria. I think we nailed it.”

‘Spirit of a Grateful Nation’
It didn’t take long for industry experts to reach the same conclusion. Since its initial rollout in Tennessee in February, the self-proclaimed “Official Spirit of a Grateful Nation” has received multiple accolades for exceptional taste. Those industry honors include a 90-point rating from Ultimate Spirits Challenge, gold medals at the MicroLiquor Spirit Awards and the Spirits International Prestige awards, and a silver medal at the wine and spirits tasting competition at the Wine and Spirits Wholesalers of America’s 69th annual convention and exposition.

In 2012, Heroes Vodka named Operation Stand Down and Operation Troop Aid as its official “giveback partners.” McVey and his team support the efforts of these charities by donating products for events, organizing awareness campaigns with media support and ultimately writing checks to the organizations based on the amount of product sold in each community.

“The veterans get paid first,” McVey emphasizes. “I’m in business to make money for my family, and I look forward to sharing our success with my fellow veterans. My goal is for veterans to be equal partners in this venture.”

Living the Dream
This fall, McVey is rolling out Heroes Vodka on a larger scale, expanding distribution to Alabama, Arkansas, Georgia, Mississippi, New York and Virginia. The company has plans to expand into New England, the Southwest and the Pacific Northwest in the near future. Meanwhile, McVey and his team are busy traveling coast to coast, promoting their premium vodka in an old-fashioned way.

In October, McVey visited with executives at Walmart’s world headquarters in Arkansas before heading to Norfolk, Va., to meet with a buyer for the U.S. Navy Exchange Stores. In between, he made appearances at several National Football League games and on ESPN radio, and conducted numerous tastings and bottle signings. A passionate supporter of charities and events that benefit veterans, McVey is an official spokesperson for the National Veteran-owned Business Association (NaVOBA), a position he takes very seriously.

“Travis McVey has the head, heart and soul of a Marine veteran business owner,” says NaVOBA’s Corporate Advocacy Director Laxmi “Mimi” Lohm. “He is a strategic businessman with a heart of gold who loves his country. NaVOBA and Buy Veteran could not be prouder to have him as a spokesperson for veterans and veteran business owners everywhere.”

Across the country, liquor retailers and bar owners are responding to McVey’s commitment to veterans and his belief in the American dream. “When I share my story of service and dedication, they see the passion and sincerity of why I created this brand,” McVey says. “Small business owners can relate to my dream. They also know their customers can relate to Heroes Vodka, because we all have been touched by these extraordinary Americans who have served our nation.”

Last May, Cool Springs Wines and Spirits, a 15,000-square-foot retailer in Franklin, Tenn., hosted an event in conjunction with Heroes Vodka on National Armed Forces Day. “We were very pleased with the turnout in support of Heroes and its mission to help veterans,” says store owner James “Woodie” Woodard, a member of NaVOBA. “It was a unique opportunity to bring awareness to Operation Troop Aid and Operation Stand Down. Travis signed bottles, and our customers were very impressed with the taste and price point of Heroes.”

McVey is careful to point out that Heroes Vodka encourages responsible drinking. Marketing materials say: Be a Hero. Please Enjoy Responsibly. “It’s about toasting our heroes and their service to our country,” McVey insists. “We want people who drink responsibly to raise their glasses with Heroes Vodka.”

Dreaming Even Bigger
Like many other successful entrepreneurs, McVey has even bigger dreams for the future. He aspires to achieve national distribution and for Heroes Vodka to be readily available throughout all military channels. After seeing the response to his 100-percent American vodka, McVey is confident that more people are connecting with the Heroes brand.

“It doesn’t matter what car you drive, or where you live or how you dress,” he says. “What really matters is that we take care of those men and women who protect us. Firefighters, teachers, police officers and our military men and women – those are our true heroes. And so, I would like to raise my glass and offer a toast to all of America’s heroes.”