Back to Profile Gallery > Herr Foods 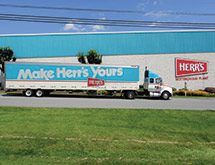 Herr Foods is a leader in the snack food industry that is especially well known for its potato chips. The Nottingham, Pa.-based company manufactures a wide selection of potato chips that feature several unique flavors not typically found in the marketplace.

Coming up with new and interesting flavors is not especially difficult, Santinelli says. “You watch people do things, and you create a new flavor of chip,” he says. For example, many people like to dip potato chips in ketchup, which led to the creation of Herr Foods’ ketchup-flavored chip.

Similarly, a ranch dressing-flavored chip was added to the product line because the dressing is wildly popular, especially among younger people, Santinelli says. “Customers want a great tasting chip,” he says. “The unique flavors are what set us apart.”

The company’s full line of snacks consists of more than 340 items. Herr Foods’ products are sold throughout the United States and Canada, but the company’s stronghold is the Mid-Atlantic region.

Distribution Channels
Herr Foods relies on three channels of distribution to bring its products to market. First, the company employs direct-store delivery in New York, New Jersey, Maryland, Delaware and Pennsylvania. Drivers deliver products to stores throughout the region after picking them up from one of Herr Foods’ 23 distribution centers. This is the sales model upon which the company began when it was started in 1946.

Herr Foods also has a national sales presence in which it manufactures private label snack brands for grocery store chains and sells Herr-branded products in large retailers such as Walmart, Kmart and Target. Santinelli says. “We’re not competing with our own brand,” he says.

The third method of distribution involves private distributors and vendors that purchase products from Herr Foods and subsequently sell them to customers, which include convenience stores, taverns, cafeterias and suppliers of vending machines. “They buy the product. They’re our customers,” Santinelli says.

The company also maintains a significant international presence, an important aspect of its continued success. “We ship to 40 to 50 countries,” Santinelli says. “We began in the 1940s. You eventually start to run out of domestic market share.”

Herr Foods leverages its wide selection of flavors and its longtime presence in the market to promote its products, Santinelli says. The company has developed strong relationships with the grocery store chains it supplies. Marketing initiatives include in-store displays and ad circulars, billboards and commercials during broadcasts of Philadelphia Phillies games, he says.

Overcoming Obstacles
Herr Foods’ most significant challenges come on the transportation and logistics side of the business. Tractor trailer drivers are increasingly leaving the industry so there is a strong need to develop partnerships with carriers to mitigate capacity constraints, minimize rate volatility and maintain service levels. The company typically deals with a core group of 10 carriers. “Previously, it was an auction environment,” Santinelli says.

Minimizing the amount of damage in transit and preventing bags of snacks from busting when trucks travel through high altitudes also are concerns. Managing inventory can be difficult because the company makes so many individual snack products. Monitoring allergens during manufacturing is a primary concern because of the wide variety of ingredients involved.

Humble Beginnings
Herr Foods was founded when James Stauffer Herr bought a small potato chip company in Lancaster, Pa. One year later, the business moved into a vacated tobacco shed on the Herr family farm. Fire destroyed the plant in 1951, but the company rebounded, purchasing 37 acres for the construction of a new, 4,500-square-foot plant. The plant was equipped with the company’s first automated cooker.

By 1956, Herr’s Potato Chips was well established with an expanding customer base, Santinelli says. To accommodate the growth, the company built a 7,000-square-foot warehouse for storage of its allied products.

In 1958, Herr’s began adding seasoning to its potato chips. The barbecue chip was the first flavored chip the company tried.