Back to Profile Gallery > Hodgson Mill 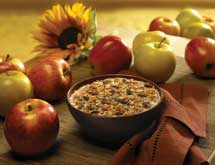 Hodgson Mill has changed a lot since it was founded in 1861, but the most important thing about it hasn’t changed at all. Bob Goldstein and Ray Martin say that even though the production capacity has grown and the equipment has become more sophisticated, the core of the process remains the same stone grinding methods used more than a century ago.

The mill’s history dates back to 1837, when it was originally built along the riverbanks of the Missouri Ozarks. A second mill built on the site was burned to the ground during the Civil War and was replaced in 1882 with a paddle-wheel mill building. Millwright Alva Hodgson took over the mill, and over time, his expertise at grinding grain made it one of the most successful in the area. Over time, Hodgson and his associates updated the mill to meet growing demand, but the stone-grinding process remained. Even as other traditional mills closed their doors in the mid-20th century, Hodgson Mill soldiered on.

Today, the company produces a full line of stone-ground, organic, whole-grain foods, including cereals, baking ingredients and pasta. Martin says Hodgson Mill is among the top-four vendors in every category it has products in as of right now. The reasons for that, he says, are the natural health benefits of whole grain foods and the company’s insistence on making the best whole grain products possible.

The mill currently has six milling stones in operation on its production line, which can produce different granulations for meal, flour and other products. Although the actual milling of the grain is done virtually the same way it was done in Alva Hodgson’s day, the rest of Hodgson Mill’s operation is very much a modern process. Automated silos feed grain through the mill stones, the ground material is sorted automatically into bins and the mill’s packaging is entirely automated.

“[Stone milling] being your core, you can still take the process before that and after that and modernize it more,” Martin says. “In essence, what you’re doing is you’re automating everything you can before and after that grinding process while at the same time preserving the tradition of truly stone grinding which retains the natural goodness of the grain.”

The integrity with which Hodgson Mill operates produces whole grain products that are high in fiber and nutrition, and are often fortified with ingredients such as soy and flax seed. Although the company’s organic products have always been appreciated by consumers, Martin says the growing interest in organic and whole grain foods can be a good opportunity for growth. The company’s customer base mostly is made up of traditional grocery retailers, but Martin sees interest from other retailers, as well.

“I think that we have a presence in the natural food stores, but we honestly think that’s an area that could be a really good growth vehicle for us,” Martin says. “As we get our story out there, we’ll really expand on that side of the business.”

Martin points to a recent food show the company attended in New England, during which a representative from a small natural foods retailer stopped by its booth and took a look at its products. “By the time we were done telling her about Hodgson Mill, she took a brochure and said, ‘We would be proud to sell your products,’” he says.

Even though Hodgson Mill has worked to modernize its operations over the years, in other ways it is working to return to where it was in the beginning. Namely, the company is working to use less energy and produce less waste. Nearly 99.8 percent of the waste generated by the mill is recycled, Martin says, which speaks to a larger commitment.

“We think that it’s something we should be doing to be a good corporate steward of the environment,” Martin says. The company has installed four banks of solar panels with plans to expand to 12, and already has built the superstructure for two wind turbines in anticipation of more efficient technology coming later this year. Even though the cost savings of solar energy are marginal, Goldstein says that he is committed to reducing Hodgson Mill’s dependence on the traditional energy grid.