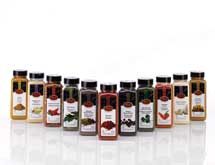 The Horton family’s experience in the Canadian spice business extends back more than a century to Cecil Horton’s introduction to spice grinding in 1909. Horton’s son, Tom, and grandson, Tom Jr., have continued that tradition through Horton Spice Mills, which will celebrate its 50th anniversary on Feb. 28, 2012.

Horton Spice Mills has developed and provides more than 1,000 spice and herb blends and 87 flavor and color blends to foodservice and commercial baking companies. The company grinds and prepares its spices in a 25,000-square-foot plant at its headquarters in Markham with a 15,000-square-foot warehouse.

Without naming his customers, President and owner Tom Horton Jr. maintains their bakery items are in every major chain store in North America. Horton Spice Mills also provides spices for manufacturers in the meat industry.

It sounds simple, but the key to running a prosperous spice business is to always buy quality ingredients, Horton maintains. Because many spices are grown in warm and developing regions worldwide, finding them is the challenge and recognizing them is the skill.

“My father only bought quality,” Tom Horton Jr. insists. “That’s how I learned – just looking at it and working with it. If a broker had come in with a spice and I’d be standing in dad’s office, they’d throw something at me, and I’d crush it and smell it, and I could tell if the oregano or basil or any herb or any spice was good. A good spice man would crush it up in his hands and smell it.”

Like a petroleum discovery, the key to spice quality is the percentage of oil in it. “We like to buy a high oil guarantee when we buy our spices,” Horton emphasizes. “India is a huge grower of spice. They grow cumin, fennel, fenugreek, turmeric, cayenne pepper, chilies, fennel seeds, coriander seeds, just to name a few. India is amazing how many spices they actually grow.”

Moving to Europe, Horton has high praise for thyme. “The French thyme is beautiful – the best thyme on the earth,” he maintains. Horton Spice Mills’ cinnamon comes from Indonesia. The company buys oregano from Turkey. “We’re buying a gorgeous paprika out of Chile,” Horton reveals. “The reason the price of spices has gone up is due to weather and earthquakes and the havoc on the earth, and the bad weather, and the floods and hurricanes. Grenada used to produce 2 million tons of nutmeg. The product dropped down to 200 tons after a hurricane went through. It takes seven to 10 years for these nutmeg trees to mature. Nutmeg is a fruit – the nut is inside the fruit. That is the nutmeg.”

Horton Spice Mills’ cinnamon has a high oil guarantee because it is ground frozen. “We use liquid nitrogen to freeze the cinnamon bark so it maintains its oil content after it’s been ground,” Horton explains. The cryogenic grinder was custom-built to maintain the volatile oils in the spice.

“You only want to grind what you need,” Horton emphasizes. “You don’t want it sitting around. We pack it as soon as it’s been ground to maintain freshness. We grind like we say on our website – www.hortonspicemills.com – in little batches and fill the order so it stays fresh.”

103 Years
Horton’s family history in the spice business extends back to 1909, when Horton’s grandfather, Cecil Horton, and his friend Don Jeffries traveled to Toronto from their hometown of Lindsey, Ontario, and worked at Dalton’s on Front Street in the spice room for nearly five years, Horton recounts. “So they got their heads together and decided to start their own spice company,” Horton relates. Called Glenwood Spices, the company placed its products in major retail chain stores of the day. Horton’s father, Tom Sr., born in 1915, eventually was recruited to join the business.

Horton’s father ground spices until he joined the military for five years at the start of World War II. “When he came back, he said to my grandfather, ‘I can build this business – put me on the road and I’ll sell for you,’” Horton relates. His father doubled sales annually. In 1961, Horton’s partner, Jeffries, died, and Cecil Horton sold Glenwood Spices to a large English spice company named Reckitt and Colman.

After a year, Horton’s father established Horton Spice Mills on Feb. 28, 1962. Horton’s grandfather was with Reckitt and Coleman, but that company was servicing retailers, and Horton Spice Mills was selling to the foodservice industry, so father and son were not competitors.

“I was born in 1956, and I can remember going to my father’s plant and looking in the spice bags,” Horton recalls. “I thought it was fun, not realizing I would run this place one day.” Horton joined Horton Spice Mills in 1975 at the age of 19 as his father did after working summers there since age 15.

“It slowly grew on me,” Horton explains. “I always was grinding spices at a young age – that teaches you the business. When I finished school, I came home one night and said to my father, ‘I’m going to come with you.’ He was so happy, like he couldn’t believe having me in the business with him. ‘I’ll tell you one thing,’ he told me. ‘If you want to learn the business, you’re going to have to grind spice.’ I ground space for 11 years.” From there, Horton went to shipping and delivery, then warehousing and to colors, flavors and extracts. In 1993, Horton’s father appointed Tom Horton Jr. as president, and in 1997, Horton’s father passed away.

Retail Project
The length of the Horton family’s involvement in the spice industry will continue into the future. The company plans to begin selling a line of its spice blends to high-end retail stores in 2012.

Horton has plans for many new products – most of which he will not reveal – but he does announce that he is developing a chocolate cinnamon for the baking industry. For the company’s 50th anniversary, he hopes to have the retail line out with 50th anniversary logos emblazoned on the company’s products.

The company is run by Tom Jr. “Tom is going to grow the business to make ample room for his daughters to carry on the Horton tradition of quality,” Horton says.