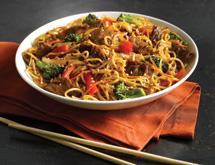 Picture this: You walk into a restaurant and the first thing you see is a huge circular grill in the middle of the room manned by a talented, spatula-wielding – and flipping – chef. You take your bowl and move through the first food station where you choose from a variety of meats, seafood and noodles. Then head to the second station and pile on the veggies, black beans or tofu. Work your way over to the third station where you choose from 12 unique signature sauces – it’s recommended you pour a lot of sauce here to give your food plenty of flavor. Then, hand it to the “grill warrior” and see it cooked in front of you. Finally, you walk your cooked meal over to the toppings bar and top it with chow mein noodles, sunflower seeds, coconut, wasabi or chili sauce.

This is your experience when you eat at HuHot Mongolian Grill, which aims to draw customers in the minute they cross the threshold. Though the Mongolian Grill concept as a category has grown and many more people have been to this type of dining place, Marketing Director Stephanie Krause says, “When people come to our restaurant they are blown away.”

The national chain, which will open its 50th location in Utah this fall, offers all-you-can-eat food at reasonable prices, making it popular among families. An adult dinner will run approximately $13, while a child meal will cost less than $5 – depending on the franchise.

“Families are a big part of the concept,” Krause notes. “Kids really love the create-your-own feature.”

Kids and adults alike can appreciate the all-you-can-eat aspect. Since one of HuHot’s main endeavors is to provide customers with a fun experience while encouraging them to take a risk, diners can go ahead and create the most interesting food combinations without regret. “If they aren’t completely satisfied, then they can go make another one,” Krause emphasizes.

Growing Steady
HuHot Mongolian Grill’s history began in 1999 when Andy Vap, together with his parents, Linda and Dan Vap, turned one of their Godfather’s Pizza joints into an Asian stir-fry concept restaurant in Missoula, Mont. A few years later, the first franchise opened in Omaha and since then, the chain has grown at a relatively fast but steady pace.

Today, HuHot locations can be found in 19 states and they are starting to pop up more on the eastern side of the country. Focusing on small to mid-size markets, which have proven successful in the past, the chain is finding similar markets in locations such as the Carolinas. That doesn’t mean HuHot isn’t willing to try new markets. Areas where household income is $60,000 have been the preferred target, but a HuHot that opened in Westminster, Colo., where income is double that, has been “doing great,” according to Krause.

The Right Franchisees
In 2013, HuHot’s sales were more than $74 million, and since 2011 the Denver corporate office has doubled to support its growth, yet the company is vigilant to grow in a controlled and smart way. Through a rigorous process of screening and training franchisees, HuHot Mongolian Grill is extremely selective in finding business partners who are the right fit. A good match is an entrepreneur who understands and can fulfill the expected monetary and time commitment. Owners get to know the corporate departments and executives to learn how the whole company runs. The HuHot business culture is equally important and the company looks for individuals who will uphold its values.

Making the right franchisee choices is important because HuHot likes to work collaboratively with them. They are encouraged to weigh in on developmental decisions. For example, one location had an idea for a new product which the corporate team supported while monitoring its promotion, management and sales. Everyone is encouraged to participate and share ideas, but at the end of the day, HuHot is dedicated to staying true to its concept. “We choose our franchisees carefully,” Krause affirms. “We want people to be successful and look for those who will run the restaurants well.”

What does the future hold for HuHot Mongolian Grill? The company acquired a franchisee last year and now has six new corporate stores. Rather than selling off these locations, it was important to the executives to keep the role of restaurant owner to continue to understand, relate to and lead its franchisees by example. Two more corporate locations will open this year and two to three more in 2014. The company also opened an express location a few years ago in Fort Collins, Colo., and is looking to make some changes and develop that concept, as well.