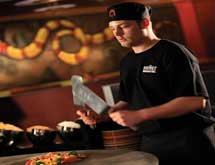 If you’ll excuse the expression, HuHot Mongolian Grill has been spreading like a wildfire set by invading Mongolians. The restaurant company began in Missoula, Mont., in 1999 and has sprouted up in locations throughout Iowa, Nebraska, South Dakota and Kansas.

Plans are in the works to open additional restaurants to extend HuHot’s reach to Utah, Indiana and Arkansas. Named as one of Restaurant Business magazine’s top 50 for the past three years, the company is growing at a rapid rate.

The family owned operation is headed by Andrew Vap, CEO, assisted by his sister, Molly O’Shea, vice president of franchise development. “My parents have been in the restaurant business since 1978,” O’Shea states. “In the late 1990s, they visited a restaurant with the Mongolian barbecue concept and were inspired enough to pursue that idea with their own twist, which included special sauces and a unique decor.” Vap came up with the restaurant design as well as the sauce recipes.

Although the Mongolian ba­rbecue/create-your-own stir fry concept is not new, O’Shea says HuHot’s sauces make its restaurants a favorite among its patrons. “We offer healthful, tasty food that’s priced right,” she says. “Families can dine at one of our restaurants, take as many trips to the food bar as they like, so they’re getting a good value as well.” Additionally, diners don’t normally get a chance to experience the back-of-the-house cooking process in a restaurant, which is an enjoyable event for most customers.

Even the décor is consistent in each location. Each store features hand-painted murals that depict Mongolian folk tales. Designed and hand-painted in each restaurant by Laura Blaker, of Missoula, Mont., the trademark dragon mural relates to a story about the King of Kucha, who was able to tame and ride a magical dragon. Servers are encouraged to relay this and other stories as another point of interest to the guests.

HuHot also stresses excellent customer service. “The guest is our No. 1 focus,” O’Shea says. She feels that many restaurants tend to be nailed down to procedures which can create an impersonal, robotic feel to the restaurant. “We don’t want our wait staff to memorize a script,” she declares. Cooks are also encouraged to interact with customers to enhance the dining experience, as well.

Using the Missoula restaurant customers as its taste-test audience, the concept took off. The 32nd HuHot Mongolian Grill franchise opened in Ankeny, Iowa, on May 6.“I have to give a lot of credit to my brother Andy for creating the sauces,” O’Shea says. She says the restaurant’s sauces differentiate HuHot from its competitors and remain the foundation of the concept’s success.

The free-standing food bars include all meat, seafood, noodles, vegetables and sauces. In the first section, guests choose meat, seafood and/or noodles. Meats and fish selections vary by season, but usually include chicken, beef, pork, shrimp and krab. Diners also can choose from Chinese noodles, pad thai noodles and yakisoba noodles. HuHot offers up to 20 different fresh vegetables, which also include tofu and a few fruit options.

Proceeding to the sauce section of the bar, guests can choose from a wide array of flavors that range from mild including Samurai Teriyaki and Not-So-Sweet & Sour to progressively spicier mixtures such as Mean Bean Garlic Sauce, Mongol Mustard and Kung Pao…Yow! The proprietary sauce formulations are only available at HuHot Restaurants. “All of the sauces are unique and flavorful, and they all blend well together,” O’Shea states. There also are create-your-own sauce ingredients such as soy sauce, sesame oil and garlic broth that guests can combine to create their own sauce or to supplement a HuHot sauce.

On the occasion a diner isn’t in a creative mood, but wants a different flavor other than a standalone sauce, recipe cards placed on the tables list ingredients and sauce combinations can be used to create a signature dish. Guests can either follow one of the recipe cards or use their imagination to create whatever their tastes dictate that day. “Diners tend to hold onto each experience at HuHot,” O’Shea says. “What’s fun is that they can create an entirely different meal with each trip to the food bar ­– whether they choose all vegetables or just meat and potatoes.”

Diners then hand their creation to the chef who treats them to a culinary show by cooking their creation on a 6-foot flat-top grill while they watch. “We try to create a fun, interesting environment for our guests,” O’Shea says. “The cooks are great at entertaining. I’ve seen them create flames and even flip vegetables onto diners’ plates.” Within minutes, the sizzling-hot, healthful meal is heaped onto a clean plate and given back to the diner who returns to the table to feast. Unlimited rice and wraps are delivered to the table by servers.

Centered around a Genghis Khan/Mongolian conqueror theme, menu offerings also include Asian-themed appetizers (The First Conquest) and soups and salads (Trusted Allies) including eggrolls, wontons, egg drop soup, Asian salad and chicken teriyaki salad. Desserts, deemed The Final Pillage, include cheesecake rangoons, Khan’s cake and Sweet Victory s’mores that are delivered to the table with a small grill that allow guests to toast the marshmallows and assemble the treats themselves.

HuHot’s marketing efforts include television, radio and print advertising. O’Shea also takes advantage of social media such as Facebook and Twitter to promote the stores and announce new openings. “We have a sort of cult following,” O’Shea boasts. “HuHot currently has 52,000 Facebook fans and 1,770 Twitter fans.” These fans continually get information about the restaurants, post messages about their HuHot experiences, and offer menu and restaurant location suggestions.

HuHot’s Facebook and blog promotional efforts expand beyond mere posts from the company. HuHot fans are occasionally stumped by pop quizzes. These questions involve trivia about either HuHot restaurants, sauces or locations, or Mongolian history or folklore. Questions such as “Name our four gluten-free sauces,” or “Some of our murals feature the King of Kucha, what is his name?” are posted.

The winners of these quizzes are treated to a $10 gift card for their next HuHot meal. In an effort to promote a healthful eating model, HuHot is collaborating with Missoula’s Stafford Fitness to promote a new health and fitness challenge. The blog will feature frequent updates from a couple following the plan as well as Stafford-approved HuHot recipes.

The HuHot website promotes its various locations and includes a HuHot Loyalty Program that offers its members credit for frequent dining. The HotClub Newsletter also keeps its customers informed. A yearly contest titled “How Do You HuHot?” provides the opportunity for guests to share favorite creations with other diners. “We had more than 20,000 entries to the recipe contest,” O’Shea boasts. “Location winners receive a cash prize and are credited on a recipe card featuring their recipe that is distributed to all of the stores and posted on the HuHot website.” Khan’s Kids Club is a sign-up promotion that treats customers’ children to a free order of s’mores on their birthdays.

HuHot’s marketing efforts also include creating a strong local presence in the towns where a franchise operates. “From the first day we open a store, we’ll throw a VIP party that allows the franchisee to choose a charity to donate the proceeds of that day,” O’Shea declares.

HuHot is also involved with The Helping Hands program which partners a HuHot restaurant with a local school or charity to raise funds for that organization. The organization promotes the event and volunteers even get behind the grill to help prepare the food. “The organization then gets a percentage of the proceeds from that event and it also promotes HuHot to potentially new customers,” she notes.

She believes this creates a loyalty among the guests because the customers align themselves with a company that gives back to the community. “Word-of-mouth promotion of our stores is our biggest asset,” she adds.

Although growing steadily, the company is making a concerted effort to streamline its training and development policies and procedures, as well as add more support to its team. “We recently hired Jeff Martin as vice president of operations to review and fine tune our operations,” O’Shea maintains. “Stephanie Kraus is another executive who will focus on marketing restructuring and reorganization.”

The internal company theme for 2010 is “The Campaign for Consistency” which will take a look at the best practices and marketing efforts used in each store and try to create operational standards based on its findings. “We want to make sure everything is consistent from restaurant to restaurant,” she says. “We are also trying to respond to our franchisees’ support requests.”

O’Shea says every corporate HuHot staff member must work in a restaurant to better understand the clientele and the daily operations. “I feel you can’t create marketing and sales tools without knowing the day-to-day operations of HuHot Mongolian Grill,” she claims. “Our restaurant training programs are pretty hands on for new employees,” she says. “Trainees start by shadowing expert servers to observe the process.”

As a more friendly and intimate approach to the customers, O’Shea says that wait staff is trained not to memorize a script, but develop his or her own style. “It makes the customers’ experiences more personal.” Cooks are trained not only how to prepare the food, but also how to respond to customer requests. The company also provides on-line training tools to supplement the in-store training process.

O’Shea believes that the HuHot buzz will continue to spread. “By 2015, we hope to have well over 100 locations,” she declares.