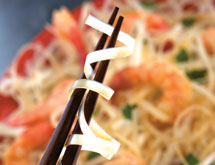 For many firms, it can be hard to maintain success as they try to grow larger. The management at HuHot Mongolian Grills LLC has avoided this trap by creating a firm foundation to work from, Vice Pres­ident of Franchise Development Molly Vap O’Shea says.

Some restaurant companies, she explains, will often add too many items to their menu or open so many locations that they cannot keep up. “We’re growing with a foundation [that keeps us] successful,” she asserts.

Based in Missoula, Mont., HuHot’s restaurant locations feature a Mongolian grill where customers can create their own stir-fry meal. Not only can diners pick their own meats, sauces and vegetables, “They can go [back] as many times that they want,” she says, adding that the restaurants also serve appetizers and desserts.

Vap O’Shea’s brother, CEO Andy Vap, founded the company with their parents, Dan and Linda Vap, in 1999. Dan and Linda Vap have been multi-unit franchisees of Godfather’s Pizza for more than 30 years. This experience, Vap O’Shea says, gives them an understanding of how to work with franchisees. They know both sides of the issues.

Although Dan and Linda Vap considered retiring, they instead chose to create the HuHot concept with their son, and opened their first location in Missoula. Today, HuHot has grown to have 37 locations in 14 states, and 11 franchisees.

Additionally, the company employs more than 2,400 who have been key to the concept’s success, Vap O’Shea says. “We’re very dedicated to our employees and making sure we can make the concept work to grow,” she says.

Thanks in part to its work force, HuHot has kept strong in the economic downturn. “In 2008 and 2009, we experienced almost double-digit, same store sales – unheard of for restaurants in such challenging economic times,” Andy Vap said in a statement.

The company’s “first location in Missoula, Mont., has seen sales growth for nine years in a row,” he added. “Not only have we been able to weather economic downturns that have negatively affected other restaurant chains, but we have been able to maintain strong growth during these periods.”

Vap O’Shea joined her family’s business six years ago, after working in marketing at The Clorox Co. “My marketing background was a great transition into HuHot,” she says, adding that her family has placed her in roles that are focused on HuHot’s growth. “I’m developing all the plans and processes that are needed for that.”

Vap O’Shea says her duties include developing new standards at HuHot and finding ways for the company to save more money. “We try to find ways to create company efficiencies and most importantly, ways to make our franchisees more money,” she says.

For instance, “We have developed a new buying program with the company Spen­Difference to create buying efficiencies for food,” she says, adding that HuHot is working on lowering its store build-out costs.

She praises the company’s entire staff, including her brother, Andy Vap. “I’m very proud of him,” she asserts, noting that he took HuHot from a small mom-and-pop restaurant to a national organization. “I just get excited to be working with him.”

Another key member is Director of Web Development Monica Minford. “She actually first came to the company as a creative assistant,” Vap O’Shea recalls. “We put her in this area three years ago, and she just took the whole department herself and grew it.”

Through Minford’s efforts, HuHot has gained 84,000 friends on Facebook, and it also uses Twitter and Foursquare to connect with customers. “[She is] out there, trying to see what works for our customer,” Vap O’Shea says.

“The social media world can be pretty exciting,” she continues, noting that the company’s Facebook friends have grown more than 100 percent since last year, and it recently ranked No. 64 on MonkeyDish’s Social Media 50 list.

Vap O’Shea also praises Director of Marketing Stephanie Krause and Vice President of Operations Jeff Martin. “Krause and Martin gave us the infrastructure and depth to run with new ideas,” she says.

HuHot has focused on improving its operations through a national purchasing program. Vap O’Shea says this program has helped franchisees get better prices for supplies.

HuHot has created a new template for its corporate managers to use when reviewing the work of franchisee owners. “We’re not just there to mark ‘X’ and say, ‘This is wrong,’” Vap O’Shea says. “We’re there to help them improve.”

Historically, Martin says, the managers’ visits strongly concentrated on food safety and concept compliance. “The new templates have expanded into all areas of the restaurant in order to provide the most value from operations visits,” Martin says.

“The visit template now includes detailed measurement of table service, thorough facility review, menu and recipe review, operations review in the dining room and kitchen, timing throughput measurements at our grill, detailed photos of great things that we see and any exceptions that are best noted with a photograph,” Martin says. “Of course, we’re still very dialed in on food safety, but really did not want our visits to simply be a regurgitation of something that we already pay a third-party vendor to do for us.

“Most importantly, the new visit template has a quick ‘at-a-glance’ overview sheet that highlights the most positive areas of the operations and any critical exceptions that need to be addressed,” he says. “Each section of the template is scored, which allows us to benchmark progress or decline over time. Most of the restaurant managers are very competitive and like the opportunity to show improvement from visit to visit.”

“We’re also really focused on our grill throughput and timing measurement process,” Vap O’Shea says. “That helps us get more meals on and off the grill.”

In HuHot’s busy restaurants, “It can be hard to understand time, measure and cook all of the grill meals consistently at the pace in which they are going on and off the grill,” Martin says. “The timing throughput measurements have helped train our grill warriors on how much time to spend with each meal as they rotate around the grill.

“That alone has naturally decreased the cook time for our guests and delivered a very consistent experience,” Martin adds. “With the timing throughput measurements, it has also equipped our franchise owners with black and white data that they can challenge their grill teams with for improvement. Previously, we had no way of knowing exactly how long each meal was cooking on the grill so there was a penchant to overcook meals.”

HuHot has opened a branch office in Denver, Vap O’Shea says. “It has been a great town for us,” she says, noting that the location provides strong support to its franchisees with the presence of Martin, Krause and the company’s new director of project management, Ashley Campbell.

“It is really exciting for our employees,” Vap O’Shea says.

“Our new Denver office is a great base for finding new talent, provides us easier access to our franchisees simply due to ease and lower cost of travel, [and] opens us up to new vendor options and partnerships for store growth in the Colorado market.

HuHot expects to grow further, Vap O’Shea says. The company has the goal of reaching 100 stores in the next five years, and it will add five more this year and recently added two new franchisees, she says.

“At the same time, we’re hoping to keep our company culture and have a good life balance, which is really important,” she says. “You’re [also] going to hear a lot more of us from the marketing side.”