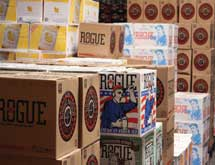 With little experience in a market dominated by powerhouse manufacturers, the two men began their brewing business – Hunterdon Brewing Co. Although the two anticipated success, they had no idea they would play a major role in the rapid growth of craft beer throughout their state.

Before they were entrepreneurs, Short and Masterson were employees. Short was successful in the insurance industry while Masterson found the same success working for an independent beer brewery. The lure of a better life working with something they both loved – craft beer – enticed the men to quit their jobs and become partners in  Hunterdon Brewing.

Although the two men were passionate about craft beer, they did not know what it was like to own and operate a microbrewery, nor did they understand the distribution difficulties in the beer industry. “Dave had some brewing experience and I had some business experience, but that was it,” explains Short, who serves as president. “That’s probably why people advised us not to go forward. We didn’t know the industry.”

Foregoing well-intentioned advice from folks around them, the two men created a formula for a craft beer, named it Jersey Shore Gold and had it manufactured by Philadelphia’s Independence Brewery. All was running smoothly for a brief period before Hunterdon Brewing  ran into heavy competition from some mainstream beer companies. Shortly thereafter, Independence Brewery went out of business, leaving Hunterdon Brewing without a manufacturer or distributor for its Jersey Shore Gold brew.

Short and Masterson acted quickly and took matters into their own hands. Riverhorse Production Co. was brought on board to produce Jersey Shore Gold and Hunterdon Brewing became the brand’s distributor.

Working as an independent distributor, Hunterdon Brewing attracted other independent craft beer suppliers looking for a like-minded distributor. “In the first few years, suppliers came to us because we were the only distributor that would take them,” Short notes.

“We are completely independent,” he continues. “We are not pressured by a big supplier.”

For several years, the craft beer segment has been the fastest-growing segment in the beer industry. And, there’s no sign that the segment is slowing. So, why have beer drinkers gone crazy for craft? As Short explains, the difference is in the quality of the beer. “Craft beers are well-made and consist of a lot of expensive ingredients,” he says. “These beers don’t contain fillers or preservatives. What’s more, craft beers offer much more diversity.”

Quality and diversity have sparked a trend in the beer-drinking public. Craft brews are in demand and Hunterdon Brewing has its finger on the pulse of the excitement.

For a business that got its start from word-of-mouth exposure, Hunterdon Brewing is dedicated to building and maintaining relationships with craft beer suppliers – helping to make the tight-knit community even tighter. “Ultimately, this business is about connecting with people,” Short adds. “You have to have a good reputation so that your retailers can trust you. There is no substitute for personal relationships in this business, especially as the segment continues to grow.”