Back to Profile Gallery > Hyatt 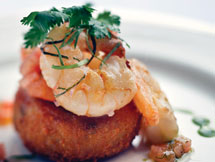 Healthy eating and sustainability are two of the biggest trends in foodservice right now, and practically every company in the industry is reacting to it in one way or another. For most, this means some revamps to their menu or an increase in the amount of organic or locally-sourced ingredients they use. For Hyatt, however, the world-leading hotel chain has fully embraced these principles with a top-to-bottom operating philosophy that has been two years in the making. Vice President of Food and Beverage Susan Santiago says this is far from a reaction to market trends – it’s a global initiative that represents how the company’s foodservice operations will think in the future.

“We just see it evolving into the future having this be more of a part of who are at food and beverage,” she says.

Hyatt has been in the process of transforming its foodservice operations for more than two years, ever since the company became aware of sustainability campaigns from industry leaders and experts. Santiago says the company wanted to make a greater commitment to providing healthy options for its guests and reducing its impact on the environment, so it began gathering information from outside educators and organizations. “We took it upon ourselves to start educating ourselves,” Santiago says. “And we quickly learned a couple of things.”

Making Changes
One of the first things Hyatt learned was that its guests were willing to spend a little extra for a healthier, more sustainable option. The company began a beta-testing program during which it paired selected items on its menus with a healthier and/or more sustainable version of it. Featuring ingredients such as cage-free eggs and premium beef, the all-natural versions of the menu items were shown next to the originals for a slightly higher price.

Since the end of the beta testing period, Hyatt has made a full commitment to sustainable and healthy options. The company has switched its standard hamburger found in all of its hotels to an all-natural burger, and last year it became the first hotel chain to feature cage-free eggs in all of its outlets.

Full Resources
The first phase of this new paradigm shift is nearly complete, Santiago says, and Hyatt is preparing to move into phase two later this year. From a day-to-day standpoint, Santiago says the company’s foodservice operations and procurement hasn’t changed all that much, as most suppliers now feature all-natural and organic options. However, the company has given individual hotels greater control over sourcing ingredients to encourage the use of more local vendors.

As the company makes the transition, Santiago says the most significant challenge is ensuring that the hotels give a clear and consistent message to guests about this new philosophy.

To this end, the company has created internal training materials that are shared on Hyatt’s intranet, and its marketing team has created a website for guests explaining the new options. Santiago says Hyatt has received a lot of help from its vendors in these efforts. “Moving forward, we are also going to ensure that those vendors will assist us with creating educational videos that we can post internally for our teams to have access to,” she says.

Continuing Commitment
Santiago says that because this is a new philosophy for the entire Hyatt chain rather than a simple menu change, its efforts will continue to evolve. Hyatt has set long-term goals such as reducing calories, sugar and sodium by 20 percent within the next several years.

Although Santiago says the company’s new healthy focus is a differentiator in the hospitality industry, Hyatt hopes the competition makes similar efforts. She says Hyatt believes its focus on “healthy people, healthy planet and healthy communities” is a good idea not only because it fulfills a need for its guests, but because it’s the right thing to do. “It will just continue to grow,” she says.