Back to Profile Gallery > Idylwilde Farms 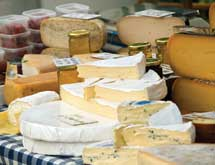 New England is a region steeped in tradition and the perfect setting for a company like Idylwilde Farms. The Acton, Mass.-based, family owned and operated grocer and greenhouse has grown and supplied quality foods to the community since 1925. Owners Thomas, Richard and David Napoli come from a rich tradition of farming. Their grandparents, Frank and Mary Napoli, immigrated to the United States from Italy in 1898 and made their living raising vegetables, poultry and eggs on 40 acres in Lexington, Mass.

In the early 20th century, the couple used a pushcart to deliver their goods door to door. By 1930, the pushcart was replaced by a retail farm stand run by the Napolis’ son, Thomas, and his wife, Catherine. The second generation named the store Idylwilde and continued to grow the business for 36 years. In 1969, their sons – Thomas, Richard and David – moved the operation from Lexington to Acton, maintaining the values of quality and excellent customer service. Idylwilde Farms outgrew its modest-sized store on Canal Street and was moved to its present location on Central Street in 1985.

The Napoli brothers designed the new store – a Dutch-style barn and green­house – themselves and contracted skilled craftsmen to build the post-and-beam structure with more than 100 tons of ash, pine and Berkshire oak, according to the company. “In this splendid setting, customers continue to truly enjoy shopping year-round for their daily meals and special occasions in an Old World atmosphere,” it says. Today, the business continues to be family operated, and a fourth generation of Nap­olis is gearing up to take the reins of the family enterprise.

Idylwilde Farms strives to provide healthier options to its customers. The company is a proponent of sourcing from local farms and gets its produce from farms in Massachusetts, New Hamp­­shire and Connecticut. “By choos­ing to eat local and organic produce, we can curb global warming and air pollution, avoid toxic pesticides, support local farmers and enjoy fresh, tasty food,” it says.

The vegetables Idylwilde Farms grows seasonally itself include beets, broccoli, cauliflower, cabbage, cucumbers, peppers, squash, spinach, sweet corn, English peas, Swiss chard, pumpkins, tomatoes, rhubarb, carrots and leeks. In addition, the company maintains a variety of fresh fruits. It squeezes its own orange juice year-round, as well as its own grapefruit juice when it’s in season. Recently, it began mixing California valencias with Florida navels for a unique juice blend. It also offers fresh-squeezed pints of carrot juice and half pints of lemon juice and lime juice.

Idylwilde Farms’ cheeses are seasonal and many are locally sourced, as well. “At Idylwilde, we carry over 200 cheeses from all over the globe, each with its own character, family and flavor,” the company says. “Instead of the more mild flavors of mass-produced cheeses produced in large-scale operations, we carry types that are aged and ripened to achieve certain aesthetics.”

Two local favorites include a goat cheese known as Cranberry Orange Capri from Westfield Farm in Hubbardston, Mass., and Butternut Cheese from Willow Hill Farm in Milton, Vt. Awarded the 2008 bronze metal at the World Cheese Awards in Ireland, Butternut Cheese is made from plank-aged, Alpine-style cow milk and has been aged at least six months before it is sent to market.

Idylwilde Farms sources all of its poultry from responsible, sustainable farming operations that raise chickens and turkeys in a free-range, hormone-free environment. In fact, the company’s turkey comes from nearby Bob’s Turkey Farm in Lancaster, Mass. Idylwilde Farms’ seafood is delivered fresh several times a week with sea scallops, tuna, halibut, haddock and swordfish always on hand.

“We also offer a wide selection of gourmet charcuterie items, as well, including Prosciutto di Parma, Serrano Ham and Molinari Salame,” the com­pany says. “Everything is sliced to order. We also offer our own breaded chicken cutlets, balsamic grilled chicken, bread­ed eggplant, our own roast beef, roast pork and store-baked ham.”

Idylwilde Farms also boasts a comprehensive sandwich selection from its deli counter, as well as homemade soups, salads and Asian food such as shrimp dumplings and chicken teriyaki. It updates its menu daily and posts new selections on its Facebook page and Twitter feed. Its bakery features locally sourced baked goods ranging from cookies, cakes and pies to buns, muffins and bagels.

Although the world has changed significantly since Idylwilde Farms first opened its doors, the company has evolved with the times and expanded its product offering when it saw the demand or it made economic sense.

However, the company has held on to key traditions, such as sourcing from local farms, which set it apart from its main competition.

Despite the burgeoning trend of big-box retail stores, it stays true to its values and belief that if it continues to focus on quality and service, the customers will come.