Ipswich Ale Brewery has been a pioneer of craft beer in Massachusetts for 25 years.

It was much easier for a craft brewery to stand out 25 years ago, but today the market has exploded as beer-drinkers have expanded their horizons beyond the mass-produced six-pack to sample a wider selection of carefully-crafted brews. Even though the craft beer industry is more crowded than ever, Ipswich Ale Brewery in Massachusetts continues to stand out today just as much as it did 25 years ago. President Rob Martin says that’s due in no small part to the company’s continuing focus on quality and freshness, its variety of palate-pleasing beers and its strong ties to the community. And, as the company marks a quarter-century in business this year, it continues to solidify its place in the Massachusetts craft beer landscape thanks to its new facility and full-service restaurant.

The company was founded in 1991 by partners who brewed beer at home as a hobby until friends encouraged them to go into business. Martin joined them in 1994 as a volunteer brewer, eventually working his way into roles as a delivery person and director of operations. After a decline in the craft beer market caused the company to layoff most of its staff in 1998, Martin reworked a brewery business plan he created in college and purchased the company from its founders. 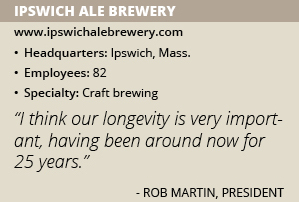 Since that time, Ipswich Ale Brewery has experienced a lot of growth in Massachusetts, and so has the craft beer market. Martin says that a decade ago, there were around 35 active brewery licenses in the state, but today that number has ballooned to more than 125. “Massachusetts has seen phenomenal growth, particularly in the last five years,” Martin says.

Despite the amount of competition the company faces today, Martin says Ipswich Ale Brewery continues to elevate itself above the rest of the market. As the craft beer market and its consumers mature and evolve, Ispwich Ale Brewery continues to build on its strengths and reputation for brewing high-quality, unfiltered beer in a wide range of varieties.

Community Cornerstone
As a brewery that has been in business for as long as it has, Ispwich Ale Brewery benefits from its household-name status in Massachusetts. Martin says the recognition the company’s name has in the market gives it a major advantage over less-established brewers. “I think our longevity is very important, having been around now for 25 years,” he says.

Ipswich Ale Brewery earned that name recognition through its beer, which Martin says has always been brewed with the highest quality standards and in a wide assortment of regular and seasonal varieties. From the hoppy, citrusy profile of its Route 101 India Pale Ale to the smooth and rich flavor of its Ipswich Oatmeal Stout, Ipswich Ale Brewery has something to wet virtually any beer fan’s whistle.

What’s more, Martin says the company goes to great lengths to ensure that its customers are always getting the freshest beer possible. Although many breweries load up distributors with huge amounts of stock to keep costs down, Ipswich Ale Brewery never provides its distributors with more than two weeks’ worth of stock, ensuring that beer never reaches customers past its prime.

Although many craft beer brands have become national after being purchased by the big brewers, the majority of craft breweries remain locally focused. In the case of Massachusetts, Martin says, the sheer number of craft breweries has made the market hyper-local. “You can drive 10 miles and be at your local brewery,” he says.

Within this hyper-local marketplace, Ipswich Ale Brewery’s connection to its community of Ipswich, Mass., is another key advantage for the company. Martin says its downtown brewery and restaurant facility gives it a front door customers can feel connected to, and gives them a sense of ownership in the brand. The company’s involvement in numerous local charities and events also helps foster a sense that Ipswich Ale Brewery belongs to the community.

New Surroundings
The company’s connection to the community became even stronger this past January, when Ipswich Ale Brewery opened its new brewery and restaurant location. The new space allowed the company to move from an industrial building where it had 9,000 square feet of production space to a former mill building that gives it 36,000 square feet. Martin says the company’s original space was inefficient and not well-tuned for production, and the new space will give it a better flow for production as well as space for expansion in the future. He says rehabbing the old mill building also helped bring new vitality to that area of Ipswich, providing greater benefit to the community as a whole.

The new space also allowed Ipswich Ale Brewery to open a restaurant, which Martin says has been warmly received by customers so far. Although the trend is for craft breweries to open tasting rooms at their facilities, Martin says the demographics in Ipswich skew a bit older and more sophisticated. “Our demographic really demands foodservice to go along with the beer,” he says, adding that the restaurant portion of the facility is managed by an experienced management team with years of restaurant expertise.

Making Changes
The addition of a restaurant and the added capacity of its new facility are helping Ipswich Ale Brewery maintain its position in the marketplace as the number of competing craft breweries continues to rise. Martin says consumers have become less loyal to brands and become more style-driven or trend-driven when they choose their beers, which means the company has had to work harder to keep its market share. “The craft beer market, except for a very few products, is not a brand-oriented market anymore,” he says.

Martin says the company’s longevity is one thing that is something of a double-edged sword in the current environment. As one of the pioneers of the craft brewing movement in Massachusetts, Ipswich Ale Brewery has been in local refrigerators for more than a generation, meaning many of the company’s current customers have been familiar with the brand their entire lives. “Now we’re somebody’s father’s beer,” Martin says.

Thanks to the company’s skilled and dedicated brewing staff, however, Ipswich Ale Brewery has been able to keep up with trends and develop new seasonal and limited beers that satisfy the taste of the moment, like its Blueberry Shandy and Cream Ale. Even though the craft beer market is more competitive than it has ever been, Ipswich Ale Brewery continues to stand out.