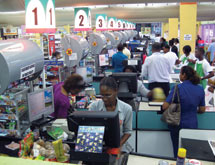 As one of the most industrialized islands in its region, Trinidad is accustomed to modern conveniences. Its proximity to Venezuela and an abundance of oil and gas has given Trinidad the second-highest country rating in its region. But for all of the country’s economic progress, Christopher Mack, managing director of J.T.A. Supermarkets Ltd., says it still yearns for old-fashioned customer service.

“Warehouse club shopping has been in Trinidad for the last 15 years and it has taken a certain level of traction from traditional supermarkets like J.T.A.,” explains Mack, who is the third generation of this family owned business. “But customers are starting to miss the personalized attention they experienced before self-service came along. They are now seeking a traditional supermarket with a greater focus on personalized care. In a way, it’s come full circle because that’s how the grocery business was up until the 1950s and 1960s when self-service began to evolve.”

For almost 80 years, the Mack family has given its customers a full-service grocery shopping experience. The business was founded by Mack’s late grandfather, Carlton K. Mack. Carlton Mack emigrated as a young man to Trinidad from China under the employment of the Allum family. In 1934, the Allums appointed him as the manager and minority partner of a newly purchased grocery operation, named J.T. Allum & Company Ltd. on 100 High Street in the heart of San Fernando. By the 1950s, Carlton Mack assumed full ownership of the business. Subsequently, he grew the supermarket chain to four branches and operated under the name of Allum’s Supermarket from 1967 to 1988 and then J.T.A. Supermarkets from 1988 to present day.

Today J.T.A. operates four locations in central and southern Trinidad and is one of the largest chains in the country. The 20,000- to 30,000-square-foot locations boast meat and seafood service counters to offer guests fresh and personalized cuts, and a produce section stocked with local year-round, local seasonal and imported varieties. There is currently one full-service deli and bakery among its stores, with plans to expand across the chain. More importantly, each section is equipped with staff ready to help customers navigate their shopping.

“Customers are asking for a more personalized touch,” Mack says. “We put in a lot of full-service-type offerings where attendants meet customers and are able to customize product choices. It’s important to allow our customers to interface with staff.”

Another key advantage for the company is the strength of its management and employees. Chairman Carl Mack has more than 50 years of experience and together with his brothers, they oversee the transition of the business to the third generation, which is led by Christopher Mack, his brother and a cousin. “Few family businesses are successful in this transition but I think we are an example of a close family that continues to be passionate about our business and loyal customers,” Christopher Mack says.

Into Suburbia
The increasing demand for full-service supermarkets has spurred J.T.A. Supermarkets to embark on its fifth and largest location. The company has hired consultants from the United States to design a 50,000-square-foot retail space. Mack anticipates the store to open in 2015, and it will be part of an ambitious 600,000-square-foot commercial development now in its fifth month of construction in suburban Trinidad that will include shopping, restaurant and entertainment outlets. J.T.A. Supermarkets’ parent company, J.T. Allum & Company Ltd., which is now focused on commercial real estate is the project’s developer and sponsor.

“Our existing locations are primarily in urban centers, but as the population has grown there has been more movement into the suburbs,” Mack says. “This new location is in Corinth, and the big plus is there is a major highway that runs adjacent to the property so it’s very good for visibility and accessibility from the highway. We expect a lot of residential growth in this area over the next five, 10 and 15 years.”

Mack explains that the new center will be a larger and optimized version of its current facilities – specializing in those full-service offerings that set J.T.A. Supermarkets apart from other traditional and warehouse competition.

“We look forward to partnering with other contract manufacturers so that we offer full value to our customers.” Mack explains. The company prides itself on working directly with suppliers and manufacturers where possible rather than distributors. Mack says it ensures J.T.A. Supermarkets has the product diversification its customers crave and at desirable prices.

Direct to the Source
“Having the most efficient supply chain in our markets means we can provide the best pricing to our customers,” Mack says. “It also means we can offer better variety. We are not limited to what the local distributors want to offer, and it gives us a competitive advantage to have greater variety than our competition.”

Mack says more of that variety will include U.S.-based products. As Trinidadians continue to progress economically, many of them are seeking U.S. food products to take home. J.T.A. has developed long-standing partnerships with foreign distributors to supply meat and dairy products and it is looking to develop new relationships with U.S. suppliers to give its customers the variety and value they seek.

“Our country is growing, and as a brand, we have to grow with it,” Mack says. “There is a growing appetite for U.S. products, so as we grow we want to develop relationships with certain U.S. suppliers to support U.S. products coming into Trinidad. As we grow our brand, we want to take control of that supply chain so we can provide products at the greatest value.”