Back to Profile Gallery > JACK Entertainment

JACK Entertainment LLC says its unique name represents an attitude and a way of thinking. “JACK is the voice of adventure,” the Detroit-based gaming company says. “It is that rare friend who entices you to step outside of your comfort zone, forget your fears, have fun and live in the moment, for the moment.”

For the cities in which it operates casino properties, JACK also means redevelopment and positive change. “We are committed to urban revitalization,” Corporate Director of Food and Beverage Steve Zappacosta says. “We are imbedded in the local community and want to do things that benefit not only us, but our surrounding area. What we have done is spur growth in the cities we’re in; sometimes you have to be one of the first in the area to make a commitment, then others will follow.” 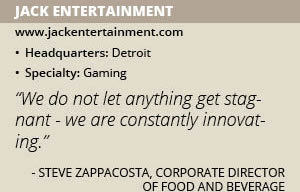 Formerly known as Rock Gaming, the company rebranded in 2016 after acquiring 100 percent ownership of casino properties in Cleveland and Cincinnati, as well as Thistledown Racino, a racetrack/gaming property in North Randall, Ohio. Prior to that, all three properties were operated by Caesars Entertainment and formerly used the Horseshoe brand.

The Ohio properties opened between 2012 and 2013. The company acquired full ownership of Greektown Casino-Hotel in Detroit in 2013. The property, which initially opened in 2000, will complete its rebranding to JACK Detroit Casino-Hotel in May 2018.

In addition to its JACK-branded properties, the company owns and operates Turfway Park, a racetrack in Florence, Ky.; and retains a minority interest in Caesars’ Horseshoe Baltimore casino.

Each of its JACK-branded properties include multiple food and beverage venues ranging from quick service to casual dining to fine dining offerings. The newest additions include Nonna Pazza, a rustic Italian concept serving made-to-order pasta dishes and artisan flatbread pizzas; and Stack’d, which serves hot sandwiches, tacos, burgers and all-day breakfast options. Both opened in August at JACK Cleveland Casino.

The Nonna Pazza location in Cleveland is the concept’s second. In April 2016, the company opened an addition to JACK Thistledown Racino that included the Italian eatery as well as Millcreek Grille, a classic American concept; and Cleo’s, a bar offering craft beer and live entertainment.

The JACK Detroit property will offer brand-new dining and entertainment experiences when it rebrands next year. One of the biggest changes to the property will be the redevelopment of its food court into Monroe Market, a fast-casual food hall with six venues and a ramen noodle concept. “We wanted to put in concepts that are new and on the cutting edge for Detroit and would be well received by our guests,” Zappacosta says.

Other recent improvements to the company’s food offerings include menu and pricing changes at Prism steakhouse in JACK Cincinnati Casino. “We recognized that Prism was a truly fine dining experience that, for most people, was primarily a place they went for special events,” he adds. “We wanted to turn it into a place where people could come three to four times a month, so we changed the menu to make it more approachable, dropped the price point significantly and immediately saw an increase in its guest count.”

The company believes in regularly refreshing its food and beverage concepts. “One of the questions we also ask ourselves is what does the local area not have that we think people will gravitate toward,” Zappacosta says. “We do not let anything get stagnant – we are constantly innovating.”

Staying Nimble
All of JACK Entertainment’s food offerings have a common element. “We have unbelievable chefs at each of our properties,” Zappacosta says. “Our food philosophy is very chef-centric. They are committed to scratch cooking, even in our quick service venues, and dedicated to their craft and the community.”

JACK Entertainment’s chefs work closely with local vendors in the communities surrounding each of the venues. “We promote communication between chefs and vendors, and are always asking suppliers about what’s hot in foodservice or what’s coming next,” he adds.

Chefs and other JACK Entertainment staff are encouraged to give input to leadership. “We can identify an opportunity, formulate a plan and initiate it in a very short period of time so we can have an immediate impact on our guests,” Zappacosta says. “We are very team member focused; we want to know what people think, because those ideas will change the world.”

The mobile app serves as a virtual player’s card that can be connected via a USB port to GT Connect, which has been installed in all of the slot machines. While connected, guests can earn awards, download bonus play and charge their smartphones. The app also allows guests to manage and redeem comps and request vehicles from the valet. JACK Entertainment plans to soon add the ability to order food from casino quick-service outlets to its capabilities.

“Even though we are a gaming company, in a very real way, we are also a technology company,” Corporate Vice President of Food and Beverage Steve Zappacosta says.