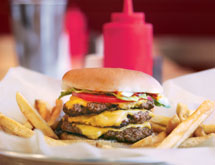 For years, fast-food and casual dining chains have played up the variety of their menus, often at the expense of the classic American hamburger. By broadening their offerings, many chains seemed to be saying that the burger was boring, a relic. Lately, however, there’s been a resurgence in the old-fashioned hamburger, and it hasn’t come from players like McDonald’s or Burger King. A growing number of regional burger chains have elevated the burger to something more than the first option on the value menu, and they’ve done so by concentrating almost exclusively on making hamburgers the right way with fresher ingredients and more care than the typical fast-food chain.

One of the chains leading this hamburger renaissance is Jake’s Wayback Burgers, a Connecticut-based company that has been serving up classic hamburgers and real hand-dipped milkshakes in the Northeast since 1991. President John Eucalitto says the company believes it has created a winning formula based on quality food, a welcoming atmosphere and, most importantly, an emphasis on the hamburger.

Jake’s Wayback Burgers opened its first location in Newark, Del., and it quickly distinguished itself from other burger offerings in the area with its handmade burgers and milkshakes made from real milk and ice cream instead of a pre-packaged mix. Over the years, the company has added hot dogs, chicken sandwiches and salads to the mix, but the primary focus of the menu remains the Jake Burger. Made in one-, two- and three-patty varieties, the Jake Burger is made to order with traditional burger fixings as well others such as mushrooms, chili and jalapenos.

Eucalitto says Jake’s Wayback Burgers faces a lot of competition from fast-food, quick-service and casual dining chains, but isn’t worried by it. “I think we stack up pretty well, primarily because of our menu and the diversity of our menu,” he says.

“Diversity” doesn’t mean the company crowds its hamburgers off the menu, though. Rather, Eucalitto refers to the company’s Burger of the Month and Milkshake of the Month promotions. Every month, Jake’s Wayback Burgers showcases a special burger and milkshake flavor for that month only. Specialty burgers range from the Thanksgiving Burger – a turkey burger with stuffing and cranberry sauce – to a chicken club sandwich on pretzel bread. Special milkshake flavors include strawberry lemonade and coconut cream.

Eucalitto says the company always is looking for new and interesting ideas for its monthly specials, and regularly involves its franchisees in the decision-making process. “We eat a lot,” he jokes. “It takes a lot of work to change up the [specials] every month.”

The food is only part of the equation when it comes to the success of Jake’s Wayback Burgers. The company strives to create a welcoming environment for customers, something Eucalitto says has been a top priority since one time he ate at a Jake’s location in the 1990s. As he waited for his food with a friend, the server repeatedly called out his order number, but Eucalitto was too busy talking to his friend to recognize his number. “If you had just said ‘John,’ I would have looked up,” he recalls saying.

Identifying customers by name and not by number is one way the company connects with its customers, and Eucalitto says allowing employees to engage freely with them is another. “When people walk into the store, there is no script,” he says, explains that the company believes giving employees a script to use when addressing customers is too impersonal.

Jake’s Wayback Burgers features a more welcoming environment than some of its competitors, as well. A mix of benches and barstools means customers can find a seating arrangement that suits their individual preferences, and televisions give them something to watch while they await their food.

The future of Jake’s Wayback Burgers is expansion, and the company already has more than 28 locations throughout the Northeast. Eucalitto says the company is looking for franchisees who will be focused on operating their store as their only business. He says the company is going to be aggressive about expansion as long as it can find the right franchisees in a particular area. “We don’t want to open one and just sit out there,” he says.

Although there are a number of burger chains similar to Jake’s Wayback Burgers currently expanding across the country, Eucalitto says success will be determined by more than simply who opens the most restaurants. “I think the difference from a franchising perspective is who will be the best franchisor?” he says. “I think the ones that do that will probably be the survivors.”

Jake’s Wayback Burgers is putting itself in a position to survive, expanding its corporate staff to help franchisees be more successful. If the company does that, the odds are good that its love of the hamburger will be echoed nationwide. “We feel we can compete on a national level,” Eucalitto says.