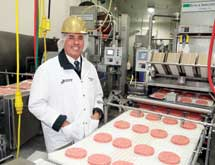 A family business within any industry will benefit from a detailed succession plan to seamlessly shift between generations of management. On the surface, these plans are uniform across sectors. No matter the industry, business decisions regarding the transferring of ownership, who takes over specific positions and the retention of benefits is something every family’s transition plan must address.

However, the intangibles that ultimately make or break a company and the nuances of a specific industry are invaluable commodities that can only be shared through on-the-job interactions between outgoing industry veterans and those who will be replacing them. At Jensen Meat Co. in Vista, Calif., that transferring of knowledge is under way, and the result so far is the application of the latest technological advances to the longstanding processes that have kept this ground beef producer in business for more than five decades.

Bob Jensen – current president and son of founder Reggie Jensen – realized this some time ago. In preparation for his impending retirement, he has relinquished various responsibilities to his stepson, Travis Scarpace, and longtime employee Abel Olivera, who serves as vice president and general manager.

Between Jensen’s decades’ worth of experience and Scarpace and Olivera’s dedication to modernizing the company’s processes and customer outreach, Jensen Meat is planning to keep the family business profitable for another five decades, at least.

“I think any and all companies have to go through a transition to be successful because you never want any one company to be dependent on any one person,” says Bob Jensen, current president and son of founder Reggie Jensen. “We’ve allowed [Scarpace and Olivera] to learn the industry and its nuances while I’m here so they can gain the confidence to go down the road and take it to the next level. I eventually will ride into the sunset.”

Jensen Meat employs 120 people, and Scarpace says the company expects to earn more than $100 million in sales in 2011 – an increase of 20 percent over the last year-and-a-half.

Scarpace brings a unique approach to the world of meat processing. After graduating from University of Southern California in 2006, Scarpace joined the commercial real estate business. He worked for one of the most prominent boutique agencies in southern California, DC Commercial, which he says his boss and mentor Doug Cancienne sold 95 percent of the apartment buildings in Riverside at one time. Scarpace underwent intense training and work with Cancienne until he launched a firm of his own with a partner.

That was before the recession reared its ugly head, though. Like countless other agents did toward the end of the last decade, Scarpace quickly realized he needed a new role. He looked into pharmaceutical sales briefly before returning to the family business where he spent summers during college working in the plant.

“When we went in to see clients, our presentation was definitely lacking,” he says. “We did not explain what we do well, and we didn’t ask questions to see what they needed from us.

Scarpace, 28, brought with him an aggressive sales approach that differed greatly from the traditional method of cold-calling usually used in meat processing, he says. Borrowing from his experience in the real estate industry, he launched an aggressive sales campaign that had Jensen Meat meet with each of its clients to determine exactly what they expected from the company.

“Since Travis came on board, he really has improved interacting more with the customer on a steady basis,” Olivera says. “In developing our presentation, we can tell why our product is different than anybody else.”

While Scarpace institutes a new sales strategy, Olivera, 33, has led the charge to modernize Jensen Meat’s operations. When he came on board in 2005, Olivera immediately focused on the production staff to gain an understanding of their roles and open a direct line of communication. From there, he began finding ways to make operations more efficient.

Olivera first set his sights on eliminating downtime. He brought the maintenance staff into the production process to create a close working relationship between the departments vs. an adversarial one. Gone are the days when maintenance staff would assign blame to production employees for equipment breakdowns, which is key to fixing the machines faster. With this in place, Jensen Meat reduced its downtime from 25 percent to 8 percent, Olivera says.

“Our main goal is to produce, so we’re having them work and interact closer with the production staff,” he says. “We’d rather have more of a team between production and maintenance.

“A key to our success was getting all the departments geared towards the same goal – producing a safe quality product in a clean environment, efficiently, while always being responsive to our customer’s needs,” Olivera adds.

Another initiative for Olivera is tracking the correct costs of processes and how it impacts price points for Jensen Meat’s customers. He has guided the company away from the old mentality that any profit is a good profit, focusing strictly on increasing margins while keeping prices reasonable for the clients.

“In this industry, everything I’ve heard is, ‘It’s a penny business,’” Olivera says. “But if you’re really pricing your products to profit with a penny, any minor fluctuations in the market can make those profits go away. Instead, we reduced costs internally so we’re able to budget to make a little more than a penny a pound.”

No matter how modernized the meat processing industry becomes, food safety remains the top priority. Throughout its existence, Jensen Meat has not had a single recall of any product, and it takes pride in that accomplishment.

In the last few years, Jensen Meat has taken its commitment to quality and safety to a new level. The company worked with Ecolab for two years developing a method to apply Sanova – an anti-microbial intervention – to beef trimmings. Jensen Meat says it is the first grinding processor to use Sanova, which helps reduce or eliminate E.Coli 0157:H7 and other harmful pathogens.

“We have developed a state-of-the-art traceability program in which lot numbers are assigned to all raw ingredients and finished product, which are traceable back to the harvesting supplier,” the company states. “With this system, we are able to identify when the product was received, produced and shipped within minutes.”

The company also says all incoming raw ingredients must have a certificate of acceptability, which confirms the product tested negative for E. coli O157:H7. “When raw materials arrive, they are immediately inspected prior to placing in our storage freezers and coolers,” it says. “Ingredients that do not pass our requirements are not accepted into the facility.”

The Future is Now

With his focus on food safety and numerous initiatives to bring Jensen Meat into the modern age, Olivera has high expectations for the future. He expects the company to triple its capacity to 150 million pounds per year. As he grooms the next generation of management for his departure, Jensen has no doubt Olivera and Scarpace can lead his father’s legacy to great things.

“I’m very confident they’ll be able to help this company grow and take it to the next level,” Jensen says. As a leader in the food industry, we’ll be able to continue setting the trends in the industry, which is extremely important for the consumer and the end-user.”