Jensen Meat is upgrading its facility and developing new products to meet increasing demand nationwide for its ground beef and patties.

Raw, fresh and frozen ground beef and patties are what Jensen Meat Co. knows best. The company’s focus is on growing in the category by making facility upgrades and beginning its production season earlier to meet its broader goal of producing 200 million pounds annually.

The San Diego-based company moved in 2013 from a 28,000-square-foot facility in Vista, Calif., to a 150,000-square-foot facility in the Otay Mesa area of south San Diego. Jensen Meat was using 81,000 square feet of the new facility until it began growing faster than expected. “We built the plant in 2013 to have enough capacity to absorb the next five years of growth,” CEO Abel Olivera says. “We didn’t have plans to do anything until 2018, but we grew faster than expected.”

Jensen Meat last year invested $4 million in its facility to add two frozen production lines, believing it would absorb the growth. “In 2017 we grew by 30 percent and we are now making decisions on what our next steps will be,” Olivera adds. “I would say we are going to be looking at our next expansion towards the end of 2018. We are closing 2017 with 75 million pounds of sales. Our goal last year was a minimum of 10 percent growth and we hit 30 percent. In 2018 we expect 10 percent growth and can absorb that with our current equipment.” 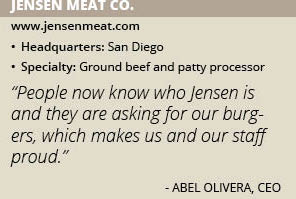 Jensen Meat manufactures individually quick-frozen and fresh patties in different shapes, lean/fat ratios and sizes under both the Jensen and private-label brands. The company offers three main sub-brands under its name: the Jensen Legend premium brand, the Original brand and the Classic brand. “We consider these our good, better and best brands, which we’re pushing on getting into local supermarkets first and then expanding,” Olivera says.

As a leading ground beef and patty processor, Jenson Meat products can be found throughout the western United States at major retailers, including Walmart and Kroger, as well as wholesale club stores. The company also supplies national foodservice providers and restaurants. “Right now, we are looking at our production plans and starting our production season earlier this year to try and beat the demand by building more inventory this season,” Olivera notes.

Tapping into Trends
Slater’s 50/50, a Southern California restaurant with a patented burger made of 50 percent ground beef and 50 percent bacon, partnered with Jensen Meat in October 2017 to bring its patty to grocery stores. The product was initially introduced to 77 Sam’s Club locations in California and six in the Dallas market.

The frozen patties are offered in 2- and 4-pound packages with six or 12 individually quick-frozen one-third pound handmade-style patties. The Beef & Bacon patties are expected to launch nationwide in all Sam’s Clubs in April.

Jensen Meat estimates gross sales in the first year could conservatively exceed $10 million. “Baconmania shows no signs of receding,” Olivera says. “There is a huge demand for bacon products. In fact, national bacon reserves have hit a 50-year low.”

By serving both foodservice and retail customers, Jensen Meat says it is always analyzing the trends and the crossover of products from one segment to the other. “We see a significant increase in the trend of bacon on the foodservice side,” Olivera adds. “Customers want bacon on everything they can consume. When you go into a bar, there’s a Bloody Mary with bacon. We started a conversation with Slater’s 50/50 on how its burger could fit into retail and that’s how this plan was born.”

The company is always looking at new product developments and will be launching a couple of Angus beef products this year – a chuck item and a brisket blend burger. Jensen Meat continues to look at ways to improve the quality of its products while keeping abreast of market trends.

Safely Processed
All of Jensen Meat’s products are manufactured with high food safety and quality standards in mind. The company has been SQF Level 3 certified for seven years. It was the first meat processing company in the United States to use Sanova; an antimicrobial solution made up of lemon juice and salt. The solution is effective in killing 99.99 percent of all pathogens, Olivera explains.

All raw materials are tested before entering Jensen Meat’s facility for pathogenic E. coli. The company developed a robust “test-and-hold” program to broaden its E. coli testing. “The test-and-hold programs out there focused on E. coli, and it’s like finding a needle in a haystack,” Olivera explains. “By telling the customer you have a test-and-hold program and the way it was developed back then was giving a false sense of security. When you are only testing 300 pounds out of a 10,000-pound batch, you can’t be 100 percent sure the product is rid of E. coli. We asked, how can we make this process better?”

Today, Jensen Meat tests for E. coli but has broadened its scope to test for all of its “cousins” to determine whether there is potential for the contaminant in the batch. “We feel we have a better chance of finding E. coli through our robust test and hold program,” Olivera notes. “The ideal thing also is to educate consumers to cook the product to 165 degrees, which on a patty is medium well. That’s the only silver bullet for E. coli.”

Moving forward, Jensen Meat plans to continue to make a name for itself in the raw, fresh and frozen ground beef and patty category. “Prior to four years ago, Jensen wasn’t recognized on a national level or even in our own town,” Olivera admits. “The local community didn’t know they had a meat company in their backyard that manufactures burgers. People now know who Jensen is and they are asking for our burgers, which makes us and our staff proud. It’s really the people behind the brand that make it special. They are so passionate about producing the best quality, best-tasting burger out there and are proud to say they work at Jensen.”