Back to Profile Gallery > Jimboy’s Tacos 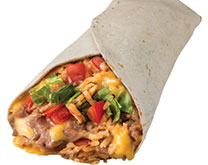 Not many Mexican-inspired culinary experiences can trace their origins back to an enterprising Norwegian, but Jimboy’s Tacos isn’t just another taco stand. The company has a legacy that dates back to Jim “Jimboy” Knudson’s small trailer on Kings Beach in Tahoe, Calif., in 1954. Built on a signature taco that is known for a perfect balance of flavors and textures along with a Parmesan-dusted stone ground corn tortilla, Jimboy’s Tacos today includes approximately 40 locations in California, Nevada and Texas.

“The ground beef taco that my father created is the product that made us famous,” President and CEO Karen Knudson-Freeman says. “It is our signature item and it is very unique. To this day, we do our own R&D on product development.”

Freshness Matters
A commitment to fresh, quality ingredients has been a part of Jimboy’s Tacos’ DNA since the beginning. The organization took a farm-to-table approach long before the trend became popular in many restaurants. The company has always focused on freshness and quality, and uses premium local ingredients when possible, preparing food from scratch daily, and cooking in small batches.

This approach has helped it develop popular menu items beyond the signature grilled crispy Parmesan-dusted tacos. Although the menu can vary slightly from location to location, grilled burritos, enchiladas, salads, burrito bowls, breakfast entrees and the taco burger are all items that display Jimboy’s Tacos’ belief in providing fresh, quality ingredients and great taste at an affordable price.

“For our Texas expansion, we have chosen to feature our best and most popular products to get ourselves established,” Knudson-Freeman explains. “Then we can add on when we know we can bring on new products at the right time. Our initial location in Texas is small, however we are planning a large model that will feature many more items on our menu, as well as a full bar.”

Branching Out
Now in an aggressive growth mode, Jimboy’s Tacos is investing in improving operations and heading into new markets. It has been doing everything from retooling kitchen equipment and developing better operating procedures to upgrading training.

“We’re also investing into technology that will help us know the customer better so we can use data to improve the customer experience,” Knudson-Freeman says.

Starting in 2012, Jimboy’s Tacos announced plans to remodel all of its restaurants based on a new adventure-themed prototype. The remodel is slated to be complete by the end of 2016. The idea is to tie the adventure theme together with branding efforts that illustrate that Jimboy’s Tacos is a fun and entertaining place to eat that is committed to freshness, quality, flavors and textures.

“We like to take risk, so the theme is based on our love for adventure and mixed with great food and a great experience in stores,” Knudson-Freeman says.

The company has also sought to expand its geographic footprint. Jimboy’s Tacos opened its first Texas location earlier this year in Plano. The opening is part of expansion efforts that could open up to 11 Jimboy’s locations in the Dallas area.

In addition, Jimboy’s Tacos has partnered with The Krrish Group, a real estate company, to take the brand into India. The Krrish Group will launch the multi-store opening in India in the near future, with up to 10 stores coming online in the next couple of years.

Heading into India has also had an impact on operations back home. While conducting research and development on menu creation, the company took some popular Indian spices and blended them with its traditional spice mixes. The company developed a taco for the Indian market, but tested the new items in its some of its corporate stores.

“That product has become popular during a test in our California corporate locations,” Knudson-Freeman explains. “We have always understood what makes food flavorful; our original spice mixes remain relevant.”

In business for 60 years, Jimboy’s Tacos has managed to maintain the quality of its food and customer dining experience while building its brand and expanding its market. The company remains committed to carrying the vision of its founder forward and continuing to build on its reputation based on quality and service.

Jimboy’s Tacos knows that pursuing aggressive growth will lead to challenges, but the company is excited about building on past successes and bringing the brand to new markets. Jimboy’s Tacos can celebrate its 60th anniversary in 2014 because it has never shied away from challenges, and growing into Texas, India and beyond will help the company set the stage for another 60 years of success.

“Today we follow traditions that are based on our legacy,” Knudson-Freeman says. “We cherish the moment when people first taste our tacos and they get that ‘wow’ look on their face. We know when that happens, they will come back.”