Back to Profile Gallery > J&J Distributing 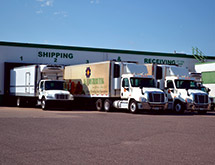 Jim Hannigan has spent most of his life in the produce business. “I’ve been in the produce industry for 48 years,” says Hannigan, CEO of J&J Distributing. “There isn’t anything in the industry I haven’t done.”

Hannigan, 72, recalls unloading produce from railroad cars when he was a college student. He also spent time delivering and repacking various commodities, ripening bananas and selling produce direct from the farm to the retailer.

Decades later, Hannigan and his family are on the cutting-edge of the organic produce movement as they guide their company into a future that will realize significant changes when it comes to nutrition and healthy lifestyles. “We’re a family owned business that has a passion for both our customer’s success as well as our success,” he says.

Family Leadership
J&J Distributing is a wholesale produce distributor with a range of conventional, organic and value-added fresh and dried products. The company distributes to a wide range of retailers, foodservice facilities and restaurants in the upper Midwest. Hannigan’s daughter, Stephanie Hannigan Melstrom, recently was promoted to president of the Minneapolis-based company after serving for 25 years in a variety of roles, most recently executive vice president of Cuttin’ Time Productions, the company’s processing division. Hannigan’s wife, Deborah, the former COO, is chairman of the board of directors.

Deborah also comes from a produce background. Both her father and grandfather made their living in the industry, Hannigan says. “It goes back to the 1920s,” he says.

Hannigan’s wife and son, Kevin, are largely responsible for the company’s transition to organic foods. “My wife has been shopping the [natural food] co-ops since the 1970s,” Hannigan says. Indeed, co-ops were promoting natural and organic foods long before they entered the mainstream, he says.

But it was Hannigan’s son who convinced his father 25 years ago to seriously consider adding organic foods to their offerings. “He basically told me [organic foods] were the future,” Hannigan recalls. He wasn’t convinced of the accuracy of his son’s prediction, but followed his advice. It turned out to be a wise move.

Organics On the Rise
Today, organic foods make up 40 percent of J&J Distributing’s business, a figure the company hopes to double in the next few years, Hannigan says. “Organic fruits and vegetables have been driving the business for the past four years,” he says. The reason is simple: More people are taking healthy living seriously and turning to natural and organic foods as a result. As young people become consumers, they will drive the growth of the organic foods market, Hannigan predicts. In addition, convenient and ready-to-eat are on the rise. Today’s customer has limited time and wants convenience. J&J distributing began processing and repacking in 2000.

J&J Distributing got its start in 1978. “We were only a produce distributor at that time,” Hannigan recalls. “We worked direct from farm to store.” The company contracted with trucking companies to haul produce from farms throughout the country to retailers in the Minneapolis-St. Paul area. “We then started importing grapes from Chile. That pretty much built the company,” he says.

“We thought we would try it out,” Hannigan says. “Urban farming is the future.” Initial plans call for the company to grow organic tomatoes, which will be delivered to stores within 50 miles of the warehouse, he says.