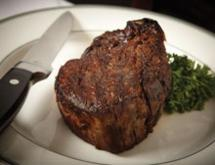 Stone crabs are caught in the wild, and fishermen remove a claw, which regenerates, and return it to the sea. Quillen says the crab has a delicate, sweet flavor that is a hit with diners. “Stone crab is very plentiful and would wash up on the shore, and people would throw them back,” he says of the time before Joe’s began serving them. “Nobody wanted them. Founders Joe and Jennie Weiss thought there might be something to this and, through trial and error, discovered the perfect way to cook and serve the crab.”

In addition to stone crab, Joe’s specializes in prime steaks and seafood dishes. The Chicago restaurant opened 10 years ago, the result of a partnership with Lettuce Entertain You and the Weiss family, and the Las Vegas location opened in 2004. “What really sets us apart has a lot to do with brand recognition,” Quillen says. “Country-wide, people know Joe’s as an iconic restaurant. Our recognition has carried well across the entire country, and we have the uniqueness of being in only two markets, which creates a draw.”

Both restaurants are large – about 12,000 square feet with seating for close to 500 – and strive to create a traditional “dinner house” setting, Quillen says. The interiors feature ample hard wood, brass, brushed nickel and few windows to create a cozy feel. “We kind of picture it as a place where your family could come to dinner and dad could hang his hat at the end of the table,” Quillen notes.

Although the restaurants may be a local haunt for some and a special occasion destination for others, Joe’s welcomes everyone. “We target anyone that wants to have a great meal at a good value,” Quillen states. “The breadth of our menu is what made us continually successful. We have everything from a bone-in filet mignon with all the sides to a great burger with fries.”

The restaurants offer a variety of seafood options “from all corners of the world,” Quillen says, including Dover sole, which is filleted tableside. Its large selection of prime steaks include a ribeye, New York strip and its signature 16-oz. bone-in filet mignon. To round out a meal, Joe’s features a selection of homemade pies baked fresh daily.

Though the restaurant bakes as many as eight varieties of pie, it is famous for its key lime, which wound up on the menu by accident. “A food writer from Chicago wrote a review of the original Joe’s Stone Crab in the ’50s,” Quillen explains. “At the very end, he put, ‘Don’t forget the key lime pie – it’s the best in town.’ At that time, Joe’s served only apple pie. Suddenly, they had people asking for key lime pie, so they had to come up with one. Jesse Weiss directed daughter Jo Ann to develop a recipe, and years later, it’s as famous as the stone crab.”