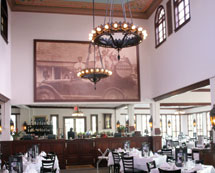 There are a lot of trendy restaurants out there, places that reinvent themselves regularly in order to remain relevant in a competitive hospitality landscape. Joe’s Stone Crab in Miami Beach, Fla., on the other hand, has taken the exact opposite approach, and it has paid off.

The owners say it’s this relentless dedication to consistency that has helped them stay in business for almost a century. COO Stephen Sawitz is the great-great grandson of the original “Joe” in Joe’s; he says the family owned Florida staple works hard at keeping the décor, menu, atmosphere and ambiance as consistent as possible for loyal diners as well as local and tourist first-timers.

“It’s important for us to maintain consistency so that the experience a person has walking in the door today lives up to the great story they heard about us from their parents or grandparents,” he adds.

Maintaining the Atmosphere
Brian Johnson, the general manager at Joe’s Stone Crab, is one individual who understands what it takes to maintain the special feel of Joe’s. Johnson has worked at the restaurant for 31 years, starting as a server under the second-generation owner, Jesse Weiss.

Unique to Joe’s Stone Crab, the restaurant shuts its doors for 10 weeks every year. Crews come in to paint, upgrade equipment and refurbish the décor – with a goal of keeping the place looking the same as it has for 30 years.

“If they were here last year, five years ago or 10 years ago – it’s what people remember coming home to,” Johnson says.

The restaurant applies the same principles of consistency to its hiring practices. Johnson says Joe’s Stone Crab hires servers once a year on the Tuesday before the restaurant reopens for the peak season. The lucky few – just five servers were hired to join the staff of 390 that accommodate the 450-seat dining room – are put through training that involves trailing a veteran server to get to know the menu. The new hires then spend time in the kitchen with the expediters so that they understand exactly how dishes should be presented.

Joe’s servers come into the business with a wealth of experience in the restaurant industry because Joe’s Stone Crab uses some old-school tactics. These vintage tricks of the trade are blended with plenty of new nuances available in hospitality. For instance, the ordering system relies on the latest technology available from Micros. Since the restaurant does not employ food runners, though, the servers are responsible for everything between the kitchen and the tables.

“With 450 seats, Joe’s can be a bit overwhelming to a new hire,” Sawitz says. “That’s why we look for people who are smart, have a background in the industry and are generally unflappable.”

“I want enthusiasm, and I need people with flexibility,” Johnson adds. “Because we have some of the old school and the new school here, it’s the perfect place for everyone to learn from everyone.”

The reason behind Joe’s Stone Crab’s method of operations is simple – it continues to work for the nearly 100-year-old institution. Although there are no food runners for servers, there is a hierarchy of food checkers and expediters that help ensure that at least four sets of eyes see every dish before it reaches a table.

“There are multiple opportunities to spot possible problems,” Johnson says. “We still have the human element, so we have to make sure everything is perfect and consistency looks the same.

“If anything looks different or tastes different, people will ask, ‘What’s going on?” Johnson adds. “That’s what we try to stay away from.”

The servers who last in this environment can be rewarded handsomely once they move to the night shift, but that doesn’t come easily. It takes at least 10 years before a server is promoted to the night shift. However, Joe’s Stone Crab still has impressive retention rates in the high-turnaround industry that is luxury dining. Numerous Joe’s employees boast about having multiple decades of tenure with the restaurant.

Back for More
Patrons return to Joe’s Stone Crab primarily for its famous stone crab dishes, which it has been serving since 1921. The menu has been vastly expanded over the years, and diners now can decide between the famous stone crabs as well as steak, chicken, salads, burgers and other varieties of seafood. Seafood in general is popular with patrons because of the quality of the catches available at Joe’s. Its offerings include grouper, snapper, ginger salmon, mahi mahi and tilapia dishes.

“Everything we do has its focus on quality,” Sawitz says. “Every ingredient is selected because of quality. And when it comes to our seafood, no pun intended, but that’s our bread and butter. It has got to be quality. And our patrons know that about us and they come back to us because of that.”

A New Experience
The Joe’s management team says that the customers typically dictate the next initiatives the restaurant will pursue to remain relevant. That’s why Joe’s Stone Crab created Joe’s Take-Away in 1987 to cater to these customers.

This section of the restaurant boasts the ability to dine in or take home. In the last two years, though, the Take-Away has added about 85 seats and a full coffee and wine bar to create a more casual market concept that serves breakfast, lunch and dinner.

“It’s more of a bistro concept now where they can buy the foods and either sit there and eat or take it with them,” Johnson explains. “It has been very well-received.” Along with the takeaway offerings, Joe’s Stone Crab has long offered its stone crabs through mail order, as well. The restaurant can ship a number of items, including its famous stone crab with mustard sauce, key lime pie and lobster tail, overnight anywhere in the continental United States. Each package comes with a mallet, a cracking board, cocktail forks, the restaurant’s iconic bibs and instructions to complete the meal where it is delivered.

“Our goal is to serve our customers the same great Joe’s experience they’ve known and loved,” Sawitz says. “We do that by listening carefully to what our customers are saying.”

“Whether it is something as simple as the takeaway section (that came from guests coming to our back door of our kitchen to buy food to go), our shipping department from guests asking for stone crabs to take on an airplane – what we do is take care of our customers,” he adds. “If it is something we can do, we try to do it.”

While new programs like this will prove valuable from time to time, Joe’s Stone Crab will not compromise the quality, atmosphere and experience it has delivered to diners for 99 years. The Joe’s family knows that the restaurant’s strength lies in the quality of the staff members who keep patrons coming back for more, and Joe’s Stone Crab has some employees who have multiple decades of service under their belts.

“As a family business, Joe’s is about the best ingredients,” Sawitz says. “Those ingredients aren’t just the stuff we put in our food. The ingredients to making a great restaurant have to include the people that serve the food, bus tables, keep the place clean and all of the people behind the scenes who carry out the day-to-day functions.”