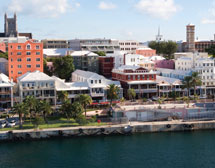 For many family owned businesses, staying successful for more than a few generations is a lofty goal that few are lucky enough to accomplish. But for Bermuda-based John Barritt and Son Ltd., keeping the business up and running since 1874 is simply a matter of providing top-notch customer service, working with the right people and providing a quality product. The longstanding beverage distributor has developed a reputation for success in each of these categories throughout the 21 square miles that is the island of Bermuda – and beyond.

“By focusing on the basics and serving our customers seven days a week, 24 hours a day, we’ve cemented good relationships in the industry that have helped us stay successful,” General Manager Bruce Barritt says. “The great brands we represent have developed a good following, and our 70-plus staff ensures our services are available island-wide at all times.”

Serving the modest market of Bermuda means service and relationships are imperative to finding success for any business, he says. “We have built great relationships with our customers, and it’s all about relentlessly providing the products our customers need, while keeping them abreast of developments in the beverage industry,” Barritt says.

The company distributes a range of sparkling and still beverages in cans and plastic bottles, and also offers a wide variety of imported waters, juices, teas, coffees and energy drinks. Today, its portfolio has grown to offer more than 250 different items, all related to the beverage business. “Our focus on beverages alone sets us apart in the Bermuda market,” Barritt said. “This focus, along with our dedication and reliability, is crucial to our continued success.”

Worldwide Reach
Barritt’s Ginger Beer has become an international fan favorite, continuously bottled since 1874. A beverage with a British heritage, ginger beer has been made famous in most areas of the world that have been impacted by British influence.

“Wherever the British went, ginger beer went with them,” Barritt says, adding that while it was originally an alcoholic product – the word ‘beer’ is historically accurate – the increases in excise and customs fees prompted many English firms to turn ginger beer into a non-alcoholic beverage. Barritt’s Ginger Beer has always been a soft drink and is the firm’s third-best seller.

Barritt’s Ginger Beer is available in The Bahamas, Turks & Caicos, the continental United States and the U.S. Virgin Islands and requests for distribution in Canada, the United Kingdom and Europe are being considered.

Experienced Leaders
For a company that has been in business since the 1800s, it’s no wonder many employees tend to enjoy the same longevity. “My brother is fond of saying that once you’re here for five years, you’re here for life,” Barritt says.

Several employees have reached the 50-year mark, and even more have enjoyed longstanding careers of 30 years. “I would like to think I have a personal relationship with our staff,” he says. “We do a lot of ‘management by wandering around’ both in the field and with our in-house staff.”

Barritt himself has worked in nearly every position in the company since he began working there more than 30 years ago. Today, his father, Robert V. Barritt, retains ownership of the firm, while his brother, Fred, works as operations manager. Another 30-year veteran – Financial Controller Ron Smith – rounds out the senior management team.

This experienced team is hard at work navigating this venerable firm through today’s difficult economic times. In 2009, the decision was made to start streamlining the production of beverages on island as the cost of maintaining a full bottling and canning operation continued to escalate while sales were softening. The company made the decision to transition to an importation model, and sold all of its bottling and canning equipment. Today, the firm produces only fountain syrups, and brings everything else in from overseas suppliers.

“This was quite a dramatic transformation, especially as our company had for many years emphasized the fact that our beverages were ‘Made in Bermuda by Bermudians’ on cans and labels,” Barritt says.

Because of this change, John Barritt & Son now has the ability to add new packages and flavors with a minimum of investment and risk which has allowed it to expand the beverage portfolio it can offer to Bermudian consumers. Space formerly occupied by filling and packaging equipment has been converted to warehouse storage, and with regular service by the two shipping lines that service Bermuda the firm expects to stay in stock much better than before.

Staying Afloat
With an economy that relies heavily on international insurance, reinsurance and tourism, the global economic slowdown has impacted the company significantly. “Bermuda has been moored in a recession for the past year and a half,” Barritt admits. “Our economy is so tied with the U.S. economy, that when they begin to rebound, ours will follow.

“There are physically less people living on Bermuda now than last year and our population is aging, which brings with it changes in individual health and consumption patterns,” Barritt adds.

Nevertheless Barritt still sees opportunities for growth in their existing beverage portfolio. “I find half a dozen things that we can improve in every account I visit,” Barritt says. “We have not fully tapped all the volume that exists here in Bermuda.”