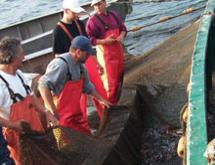 John Nagle Co. was founded in 1887, by John J. Nagle, an innovative Gloucester fisherman, who saw a need to obtain a fair price for the fishermen he worked with and, at the same time, deliver the highest quality fish to consumers. In the early years, the company grew as an auction house, selling fish from all the Canadian Maritime Provinces to Cape Cod, R.I., and into the Mid-Atlantic.

During the 1920s, the founder turned over the reins to his son, John Jr., who advanced the international development of sword-fishing techniques with Taiyo Fisheries. Mackerel business also soared under his watch as food wholesalers strove to feed the country during World War II.

In 1944, John’s two oldest sons, John and Vincent, who had been groomed to take over the family business, were killed in the war.

Russell J. Nagle, the only surviving son who was 19 and a student at Boston College, stepped in as president of the company while continuing to complete his studies. In the 1960s, with the advent of airfreight, Russell spearheaded the promotion of fresh wild Pacific salmon into the East Coast marketplace.

In 1985, Russell began renovations on an ex-WWII military battleship manufacturing facility in Boston’s Marine Industrial Park and moved his business to the company’s current location on the waterfront at 306 Northern Avenue. Today, John Nagle Co. is managed and directed by the fourth generation of the Nagle family.

Charles Nagle has been president since 2001 and works closely with his brothers, Robert, John and Vincent, and his sister, Janet, to advance their family business. As a pioneer in the wholesale seafood industry, John Nagle Co. explains that the business has grown from one man and a handshake to a leader in the wholesale industry. As the industry evolved, so has the company, adjusting to the growing demand for quality seafood products.

According to the company, Russell’s vision and choice of physical location made John Nagle Co. a gateway for seafood from around the globe. Its current home is now an 80,000-square-foot facility specifically designed for seafood handling within view of Boston Logan International Airport. Thirty-two thousand square feet of cooler and freezer space is designed to process and store inventory to meet rigid specifications.

In addition, it is a FDA- and HACCP-certified facility with a research and quality assurance laboratory on the premises. Over the last two years, the company’s management team has evaluated and moved toward the implementation of the Safe Quality Food Program (SQF), governed by the Food Marketing Institute. As the firm’s business has grown, John Nagle Co. says its management has recognized the need for it to operate on an ever-higher standard of quality, tracking and accountability.

Salmon has been a staple of John Nagle Co., harkening back to the days of the wild Atlantic runs and when Russell introduced fresh wild Pacific salmon to consumers on the East Coast. Every season, the Nagle buyers begin their annual plunge into the wild Alaskan salmon market, including the Copper River.

Over several decades, Charlie has developed friendships and alliances with many of the oldest fishing producers and families throughout the regions of Alaska, California, Washington, Oregon and British Columbia. The Nagle company says it is instrumental in distributing Pacific Wild salmon, whether it be kings, sockeyes, cohos or chums. Charlie notes that he “enjoys his time in the business” and that it is “good work.”

He also notes that he has appreciated that the seafood industry has allowed him to form friendships with great people from all over the country and the world.

When aquaculture first began, the company says it was in the very forefront, importing whole Atlantic salmon from Norway. Once again, in the 1980s, the company partnered with the first wave of Chilean aqua-culturalists and farmers with the intent to promote and distribute Atlantic farm-raised salmon.

John Nagle Co. established and fine-tuned an experienced freight forwarding network to promote and distribute high-quality, fully processed portions and fillets produced and packed to customer specifications throughout the U.S. marketplace. It says it is especially proud to distribute SQF-certified Atlantic salmon from New Brunswick, Canada, produced by esqu, a well-managed, environmentally responsible farm that is close to home.

John Nagle Co. also has recently started a processing division that combines its sourcing ability with the ability to custom process orders. “We are currently shipping customized portions and fillets throughout the United States,” Charlie says. “One of our salesmen just called in from the road and told us that his customer stated that the salmon fillets that we were producing for them were the best they had ever seen and they wanted to increase what they had planned to buy from us and also increase the overall number of items,” he says.

“They were amazed at the scope and depth of our seafood business. This is what makes us feel good, to know that we’re doing the right thing for all parties involved.”

In addition to wild and farm-raised salmon, the Nagle company handles a high volume of swordfish. The Discovery Channel show, “Swords: Life on the Line,” highlighted the danger and risk inherent on commercial long line sword fishing boats.

The John Nagle Co. is often responsible for the offloading, pack out, distribution, processing and financial returns to the boat owners and captains. Every swordfish is sized and weighed, graded and identified with a specific ID number for lot tracking. The Nagle family say they take their responsibilities seriously. “It makes you feel great to do a good job for the fishermen, and we appreciate their positive feedback,” Charlie explains. “We are not a ‘make a lot of money and get out’ type of business.”

His father, Russell, always reminded him, “You won’t accomplish anything without working and working hard for it,” he says. “You must always pay attention to what we’re doing.”

According to the company, these strong traditions and values define the Nagle family’s methods of doing business. Nagle Company supports the U.S. commercial long line fleet along with the U.S. government’s conservation programs so that environmentally sound fishing methods are developed and implemented, it says. In 1990, the International Commission for the Conservation of Atlantic Tunas (ICCAT) established harvest quotas and minimum size requirements for North American swordfish and tuna. As a member of ICCAT, John Nagle Co. says its goal is to protect both the livelihood of the U.S. and Canadian fishermen and the resource of North Atlantic swordfish.

John Nagle Co. notes that swordfish has been identified as a nutrient-dense food that is rich in a variety of nutrients, including selenium, magnesium, potassium and omega-3 fatty acids. In addition, recent studies have found that the abundant levels of selenium effectively neutralize any potential harmful effects of naturally occurring mercury. “Science now confirms what our mother always said: ‘Seafood is brain food,’” Charlie says.

Halibut has been a staple of the Nagle business since the turn of the century. Over the past decade, the consumption of halibut has grown in popularity. Throughout the years, the Nagles worked to improve the quality of halibut through the monitoring of bleeding and icing procedures, resulting in superior meat textures and a longer shelf life.

According to John Nagle Co., both the West Coast and East Coast halibut are well-managed sustainable fisheries with strong conservation measures in place. The Pacific halibut is managed by the United States and Canada through the International Pacific Halibut Commission, which annually establishes a total allowable catch.

John Nagle Co. works closely to ensure that its suppliers document sustainable practices by demonstrating compliance to all regulations and international agreements. Its suppliers’ responsible actions have resulted in Pacific halibut being certified as sustainable by the Marine Stewardship Council.

In addition, “We are proud of the many initiatives, such as single stream recycling, energy conservation and high-efficiency lighting that have allowed us to reduce our carbon footprint and feel good about our corporate responsibility,” Robert adds. According to the company, New England’s fertile waters continue to be John Nagle Co.’s source for traditional seafood products such as lobsters, scallops, haddock, cod and shellfish. Other items such as local scup, squid, black sea bass, wild stripe bass, mackerel, butterfish and bluefish are also displayed and shipped daily to wholesalers, distributors, retailers and ethnic markets throughout the country.

John Nagle Co. also carries a full line of frozen seafood items. It explains that the development of one of its newest lines serving the needs of the growing sushi market came naturally. Sushi has some of the highest-quality requirements for any seafood application, it notes.

“We extended our offerings with specialty sushi items that complement our diverse history and customer base,” Charlie adds. “We are always striving to have what our customers want.

“We are fortunate to be involved with the sale of the best protein source that is as delicious as it is nutritious. John Nagle Co. is proud to serve our industry and welcomes all who come to do business with an understanding of mutual benefit and respect.”