Back to Profile Gallery > Johnny Rockets 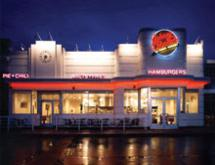 Seeing a niche for a classic American burger shop in Los Angeles’ trendiest district, Johnny Rockets founder, the late Ronn Teitelbaum, opened his first restaurant on Melrose Avenue in 1986. Patrons were delighted by Johnny Rockets’ fresh, hand-pressed hamburgers, traditional sandwiches, French fries, hand-dipped shakes and malts, and authentic American décor. Many were reminded of the old-fashioned malt shops and burger joints of their youth, and the restaurant chain also attracted new generations with its classic menu and fun tabletop jukeboxes.

The Lake Forest, Calif.-based company has blossomed into a bustling franchise with more than 8,000 employees and nearly 300 locations across the United States, as well as in Canada, Mexico, the Bahamas, the Philippines, Panama, Chile, Germany, Egypt, Saudi Arabia, United Arab Emirates, Qatar, Bahrain, Kuwait and Cyprus. There are several reasons behind Johnny Rockets’ success, President Lee Sanders notes. An obvious one is the quality of the food.

The restaurant also offers the Route 66, made with Swiss cheese, grilled onions and mushrooms, and mayonnaise; the Streamliner, which has a Boca brand veggie patty, and the St. Louis, made with bacon, Swiss cheese, grilled onions, lettuce, pickles and the chain’s famous “St. Louis sauce” – a favorite among patrons in the Midwest. Its newest addition is the Houston burger, with fresh-cut jalapenos, pepper jack cheese and a spicy, garlic-based sauce. According to Sanders, the burger is available in select markets on the West Coast, but will be available to all restaurants by the first week of April.

When Johnny Rockets was acquired by its current ownership, private equity firm Red Zone Capital II, in 2007, the company’s business model changed. “Our current equity holder wanted to use a franchise growth model as opposed to a company growth model,” Sanders says.

The former model enabled the company to bolster its brand in the years leading up to the acquisition, and the franchise model allowed it to grow organically from that point on. “The more restaurants you open, the more exposure you have,” he remarks. “At some point, it builds momentum and you get a growth model that starts to feed itself.

“We’re a smallish company, but if you ask 10 people on the street how many Johnny Rockets there are, they’ll say hundreds or thousands because we have a name that is a much stronger equity than the number of stores we have on the ground,” Sanders adds. “We are very lucky in that regard.”

Also, Johnny Rockets’ new ownership has chosen to saturate the market with a three-pronged growth strategy. First, it targets high-traffic locations that are trendy or tourist-related, such as Six Flags theme parks. Second, the company opens stores in suburban locations or on the outskirts of major metropolises. The third is nontraditional locations such as casinos, ball parks and stadiums, cruise ships, airports and military bases.

Looking forward, Johnny Rockets will continue to build stores in the Middle Eastern Mediterranean corridor and the Far East, but for now, “we’re mitigating the economy,” Sanders says. “We are doing what we do best and doing it as well or better than we’ve ever done it. We provide our guests with the satisfaction they seek and have taken tremendous efforts to clean up and improve the general administrative part of the business.

“We’ve also shifted more from a national marketing effort to a local store marketing effort so the restaurant operators can interface directly with their own trade areas to retain loyalty,” he continues. “What we haven’t done is touched our food. We have not made any quality or quantity reductions in the food. We continue to provide great food and satisfy our guests, and that can only be done through our people.”