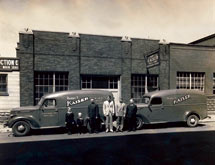 Transitioning from distributor to manufacturer of pickles and peppers is no easy feat. But when a company and its family ownership and operations have dedicated themselves entirely to quality, amazing things can happen.

Nearly 30 years after purchasing a pickle manufacturing company in Ohio, Kaiser Pickles and the family management group at the helm are one of the most prominent pickle producers and distributers east of the Mississippi River.

“Today, we’re a full-force manufacturer, and we leave the distributing to the distributors,” CEO Kim Kaiser-Speed says. “We saw a lot of growth when we went down that path.”

Harry T. Kaiser founded Kaiser Pickles in 1920 originally as a food distributor with an emphasis on pickles and sauerkraut. The second generation of family ownership took over in 1967 when Harry T. Kaiser Jr. assumed the helm and transformed the company into Kaiser Foods Inc.

In 1990, Kaiser Foods purchased the Farm Pack Pickle Co., making it a fully integrated pickle and pepper manufacturer. In 1995, David M. Kaiser became CEO, and he and his siblings plus a few key employees took the company to the next level.

By the beginning of 2004, Kaiser Foods began restructuring its operations and developed several limited liability companies. The newly established Kaiser Pickles LLC operates as the pickle and pepper manufacturing operation.

Kaiser Pickles ships product through a network of distributors throughout the eastern half of the United States. The company also has some national accounts that go west into California, and it also has picked up overseas work for accounts that send product as far as Dubai and Kuwait.

Example of Quality
Kaiser Pickles has taken over that marketshare by dedicating itself to quality. Speed-Kaiser says the company updates its quality control continuously, and it is currently in the process of achieving the third level of Safe Quality Food certification after debuting at the second level in its first audit.

Auditors have been so impressed with the quality of Kaiser Pickles’ operations that Speed-Kaiser says the company has fielded referrals to train other food manufacturers on how to achieve these certifications. “Our quality control is updated continuously, and it is not something we put in place and walk away from,” Speed-Kaiser says.

Listening to Clients
With so many varieties of pickles and peppers available these days, Vice President of Sales Mark Kaiser says it is imperative to follow client demands for certain products. This is why Kaiser Pickles entered the pepper segment about two years ago, and it also is how it handles private labeling, which accounts for approximately 50 percent of its revenues.

“We’ll work with our customers to develop product lines that fit their market, and we’ve done a lot of that,” Kaiser says.

Many pickle companies have gone out of business or consolidated, which Kaiser says has shrunk this segment of the produce industry considerably. That has been a major benefit for Kaiser Pickles, which has been able to pick up additional marketshare as its competitors fall by the wayside.

“Logistics plays a part of it,” he says. “When some of the pickle companies in the South and Southeast close up, it pretty much makes logistical sense to choose us. We have a logistical advantage over our competitors.”

Pickle companies like Kaiser Pickles also have seen an uptick in sales due to consumer demand for healthier products in the marketplace in the past five years. Despite their high salt content, Speed-Kaiser says pickles are a relatively healthy choice for today’s health-conscious eater.

And when the economy took a hit like it did the past few years, pickles remained not only a healthy choice, but a cost-conscious option, as well.

“When the economy went down, a lot of people stopped attending white tablecloth restaurants and began eating more at lower-cost fast-food restaurants,” Speed-Kaiser says. “So, pickles are more prominent now.”