Back to Profile Gallery > Kegel’s Produce 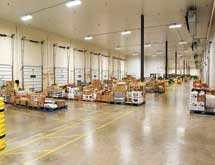 Owned and operated by its current family leadership for more than 60 years, Kegel’s Produce has earned a reputation for providing the best service when it comes to distributing the freshest fruit and vegetables to a broad range of customers in the Northeast, Vice President John Groft attests. A strong emphasis on quality and customer service was instilled in the Lancaster, Pa., company by its founder, Earl P. Kegel, who started selling produce at a fruit stand outside the Lancaster County Courthouse and at a local retail store in the 1930s.

In 1946, Mary Myers, whose family owned the Myers Bros. well drilling company, joined the firm in the accounting and billing department, and eventually purchased the company. Her son, Ken Myers, quickly became involved in all aspects of the business. In 1965, he married Suzanne Vlassis. They bought the company from Mary Myers in 1989.

Ken Myers passed away in 1992. Sue Vlassis Myers became president – helping Kegel’s Produce become a Women’s Business Enterprise – and their son, Kenny Myers, is now COO. Groft, who worked at Kegel’s Produce throughout high school and college, helped introduce Kenny Myers to his aunt, Annette Celia. The couple married and had three sons, K.J., Kerek and Koby Myers, born in 2001, 2004 and 2007, respectively. They make up the fourth generation of the Myers family in the produce business.

Staying Fresh with the Times

Today, Kegel’s Produce operates from a 100,000-square-foot warehouse and distribution facility, and has a transportation department consisting of 40-plus delivery trucks that serve more than 1,200 customers in Pennsylvania, New Jersey, Delaware and Maryland between four and seven times a week. Approximately 80 percent of its clients are foodservice customers and the remaining 20 percent are retailers. Some of the company’s vendors and customers have worked with Kegel’s Produce since its inception.

But in recent years, Groft says the company has begun working with third-party management firms that distribute Kegel’s produce to chain restaurants, colleges and universities, nursing homes and hospitals. “It’s changing the culture of the business because you’re not always communicating with the end-user,” he notes, explaining it becomes difficult to maintain long-term relationships this way.

Kegel’s Produce stocks more than 1,000 items, including fresh fruits and vegetables, herbs, eggs and pickles, and operates a specialized fresh-cut division. Groft says the company continuously strives to stay ahead of food trends by “bringing in something new to the area, something new for our local chefs to try. We always try to be the first company with the newest product.”

Kegel’s Produce brings produce in from all over the country. However, “We are fortunate to be in the heart of one of the nation’s richest farm areas, and we take pride in our relationships with local farmers,” he says. “Providing local varieties of seasonal items is a very niche market, and we strive to be the best.”

Investing in the Future

Although Kegel’s Produce has grown and flourished throughout the decades, one thing has not changed since its inception: its commitment to freshness and service, Groft says. “We pride ourselves on – and were founded upon – quality and service,” he states. “We still have the family business and the mom-and-pop feel, but we’re forced to operate in a corporate world. We still stay true to our founding values by investing in our customer service, as well as our sales team, except we call them ‘produce consultants.’”

Kegel’s Produce enjoys relatively low turnover for its industry; many emp­loyees have been there for more than 15 years. It also is an active member of the Produce Marketing Assoc­iation’s Foun­dation for Industry Talent, a group that attracts, develops and retains talent for the produce community.

“Our goal is to become the best at what we do in our region and to invest in our people,” Groft explains. “The companies who fall back on their morals during this competitive period and have the best set of values will come out on top, and I feel that’s why we’ve been so successful.”