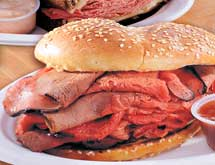 Kelly’s Roast Beef Inc. celebrated its 60th year in business last year, and although some restaurants lose their panache over the years, Kelly’s has only become more of an institution and its locations are local landmarks in a number of Massachusetts communities. It seems customers come back again and again, not just because their taste buds are delighted by Kelly’s extensive menu, but also because Kelly’s constant focus on customer satisfaction ensures each guest leaves with a quality experience.

“Many of Kelly’s menu items are prepared fresh on the premises,” Director of Operations Dean Murphy explains. “Our onion rings are handmade, our fish and chips dinner is fresh North Atlantic Pollock caught in the local waters, the fresh whole-bellied clams are delivered daily and freshly breaded to order, and our sea scallops are the finest available.

“In the four restaurants that have counter service, we offer tray-to-table service as well,” he adds. “At the original location on Revere Beach, we offer call-ahead curbside service. We recently completed testing the Coca Cola Freestyle, which is a self-service drink dispenser offering more than 125 different brands, and we will be installing it in some of our locations.”

To get a glimpse of Kelly’s devoted following, one just has to do a quick search on Yelp.com, the site where people review local businesses. Each Kelly’s location has more than 100 reviews as well as a solid rating of at least four stars out of the maximum five. Most Yelpers, in fact, post lengthy reviews about what exactly they love about Kelly’s.

For example, Ido W. from Boston gave five stars in his review of Kelly’s in early 2012. “Kelly’s Roast Beef has more than just roast beef,” he said. “It also has pulled beef. And a line. There is always a line. And do you know why there is a line? There’s a line because people know that these sandwiches are worth waiting for. I keep coming back [and] I would recommend it to anyone else.”

In late January, Matt G. of Newport, R.I., also gave five stars to Kelly’s. “You can’t get a better roast beef sandwich – Kelly’s is my favorite,” he said in his review on Yelp. “Whenever I’m up on the North shore and I pass a Kelly’s, I find a reason to eat. [I’ve] never had a bad sandwich or experience.”

But Kelly’s emphasis on quality began long before there were sites like Yelp. Kelly’s quality focus has been in place since Frank McCaffrey and Ray Carey Jr. founded the company 60 years ago, so much so that it is ingrained in the culture.

In fact, Kelly’s quality reputation is part of the reason why the McCaffrey and Carey families are proud to maintain their ownership of the business, Murphy notes.

“There is a difference working for a family owned restaurant,” he says. “The McCarthy and Carey families are truly concerned about each and every employee and their families. They are very unique people who go above and beyond for their employees, and this shows with the fast, friendly service in our restaurants.”

A Community Staple
The five locations of Kelly’s Roast Beef became bastions of quality not just because of the attention they pay to the preparation of their food and delivery of service, but also because of their dedication to their local communities.

“We truly believe in giving back to our communities,” Murphy says. “We focus on children groups – such as sports teams and school groups – both in and out of the restaurants.”