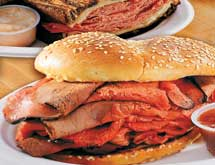 In the 1731 song “The Roast Beef of Old England,” roast beef is described as a “mighty” dish that “ennobled our brains and en­rich­ed our blood.” At this time, it was considered a signature meal in Eng­land. As some of the British moved to America, however, tastes changed, and by 1900, a writer with the Washington Post described roast beef as “a tired ark in gravy flood.”

“Frank was a chef, and chefs are very creative – they like to make dishes their own,” explains Manny Paula, president and CEO of Kelly’s Roast Beef. “Before he created his sandwich, roast beef was sliced thick, covered in thick, brown gravy and served on bread. Frank cooked his first roast beef in a pizza oven. It was slightly seasoned and cook­ed slowly in its own juices, and then was sliced thin for a sandwich.”

McCarthy and his businessman friend, Ray Carey Jr., loved this new roast beef sandwich so much that they decided to make it the signature item on the menu of their new restaurant, which got its start on July 3, 1951, on Revere Beach in Revere, Mass. One night while having a couple of beers, Frank and Ray were going back and forth on what to call the restaurant. “‘Let’s call it McCarthy’s,’ ‘let’s call it Carey’s Roast Beef,’ then it hit them,” Paula relates. “They looked at their bartender friend and said ‘Hey, Tom, can we name it after you?’ ‘Of course,’ said Tom, so there you have it. They named their new restaurant after Tom Kelly.”

Tom Kelly’s name now is known for quality food and service, he notes.

“We are known for the great tastes of everything on our menu, and it all got started with that sandwich,” Paula says. “In the 1960s, Forrest and Leroy Raffel – two brothers from Ohio – ate at our Revere Beach location, and loved the sandwich so much that they wanted to open a roast beef shop of their own. They went back to Ohio and founded Arby’s, based on how we cooked our roast beef.”

Since that time, Kelly’s has expanded to six locations, and it is still owned by the McCarthy and Carey families: Brian and Nancy McCarthy, Ray and Diane Carey, Kevin and Betty Carey, Kathleen Barnes, and Mary Ellen and Frances Tortalano. The company is not concerned about growing quickly or being the biggest, Paula stresses, because it doesn’t want to make any move that will sacrifice the quality of its food or customer service.

“The original owners’ sons and daughters are now the owners, and they care as much as the founders did,” he says. “We have a staff full of employees who care and take pride in what they do, and a menu full of great food – that is the definite key to success.”

When Kelly’s Roast Beef expands with a new location, the new restaurant will not open until everyone is certain the quality of the food and service are consistent with the other sites. To start, the company believes in always having “the right people in the right jobs,” Paula says. Not only is the company careful about who it hires, but also new locations are first staffed with long-term employees. They stay at the new location until new employees fully understand what to do. Lucky for Kelly’s, it has enough long-term employees to staff its new and old locations.

For example, one employee who currently slices beef at one of the locations has been with Kelly’s for more than 40 years, Paula says, and the catering director has tenure of more than 30 years. The restaurant industry is known for high employee turnover, but that is not true of Kelly’s Roast Beef, he stresses.

“It’s important to us that we have people with a lot of experience in all of our locations,” he says. “We are very proud of the longevity of our employees and store managers because they are the people who make sure we are known for our quality.

“We don’t believe in managing from the office – we manage from the restaurant,” he adds. “Between Chris Hendry, our training director, and I, we make sure that one of us visits each location every day. The McCarthy and Carey families really care about this business and our people, and that makes everyone care about what we do.”

Customer service is an area of continuous improvement for Kelly’s Roast Beef, Paula says. When it opened a location in Medford, Mass., in 2006, for example, the company intentionally made the restaurant smaller, which allowed employees to move around faster and serve customers more quickly.

“At our Medford location, customers get numbers when they order and take the number to their tables,” Paula explains. “Our employees then deliver food to them. The number of compliments we get on this is unbelievable – customers love it. But our service isn’t just apparent inside the restaurant – if it’s raining, you will see our employees with umbrellas, walking customers to their cars. It’s all about passion in what you do, and taking pride in all you do.”

Paula joined Kelly’s Roast Beef in 2003, and was excited to be a part of the team. He had been in the restaurant business for 30 years and wasn’t looking for a new job, when a recruiter friend called with an opportunity.

“I couldn’t pass this up,” he stresses. “I went to Kelly’s all the time as a kid with my parents, and I started driving myself to Kelly’s when I turned 16. I was excited to have a chance to work with them, and when I was hired, it was like landing the perfect job. I am excited to go to work everyday because I got to work with great people, great managers and great customers.”

As a long-time customer himself, Paula understands the importance of maintaining a high level of quality throughout the operation. “We have so many regular customers that we get great feedback whenever we do something new or different,” he notes. The company plans to maintain its method of slow growth – its Danvers location opened in 2001, Medford in 2006, and its newest location in Allston opened this year. The key, Paula says, is to ensure “all of our locations always operate at their maximum potential,” and Kelly’s will not expand until it is certain of this.

“Our motto is, ‘There was a time when ingredients were delivered fresh daily, when everything was made to order, when delighting guests was a must, even if it meant bending over backwards. At Kelly’s, it’s still that time. Always will be,’” Paula says. “We live that every day – it’s about staying true to yourself. When we serve our customers, we act like we are serving our mothers – you have to always do the best thing for our customers, because without our customers, we’re done.”