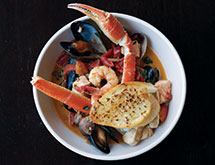 For nearly 30 years, Killer Shrimp LLC has kept customers coming back with its mix of unique dishes and a special environment, CEO Kevin Michaels says. “It’s really the Killer Shrimp, the vibe and the décor,” he says. “It’s something you can only get from us.”

Based in Marina del Rey, Calif., Killer Shrimp has become known for its namesake dish, which is prepared with “the best shrimp you can get: Mexican whites and blues,” he states. “They’re poppy, fresh and they have that incredible, briny shrimp flavor.”

Killer Shrimp originated from the shrimp recipe of Michaels’ father, Lee, a musician. “We were surfers growing up in the 80’s and everything was ‘Killer’ to us, so we would say, ‘Dad, can you make us that killer shrimp?,’” the younger Michaels recalls. “My dad would get all the fresh shrimp and the ingredients we needed. It became our family dish.”

When Michaels was a teenager, he ran around town on his skateboard dropping off flyers for lunch and dinner deliveries of Killer Shrimp. As momentum grew, his father went on to open a pop-up restaurant in Venice, Calif., that served the shrimp. “Everybody raved and loved it,” he says, noting that he and his father later opened the first Killer Shrimp location in 1988 on Washington Blvd. in Marina del Rey.

Initially, the location only served hand-peeled shrimp and sweet potato pecan pie. “The biggest challenge was getting someone to rent us a building when we only served one item [for dinner],” he recalls.

“We operated like that for three years,” Michaels continues, noting that it later opened a location in Studio City, Calif., where they began to offer Killer Shrimp poured over angel hair pasta and steamed white rice.

“We did that for about 20 years,” Michaels continues, noting the shrimp earned the company guest loyalty. “It became a food addiction and something our guests have once a week.”

In 2008, Michaels closed both restaurants. “Our 20-year lease came to maturity,” he recalls. “We decided the best thing was to look for bigger, better locations where we could serve liquor and revamp the concept.”

Killer Shrimp later unleashed its “ultimate date night model,” with a wide selection of food for adults and the whole family at a new location. “By 2011, we opened our flagship restaurant right on the marina with a full menu,” he recalls. “We do everything from soup, salads, steak and seafood, and expanded on what we do with the Killer Shrimp.”

The location also features a bar that serves two happy hours. “A late night happy hour has become an industry thing for all the [local] hotels and [businesses],” Michaels says.

The company has a second location in Hermosa Beach, Calif., that was remodeled from an older building. “It’s been a really successful location for us,” he says, noting it has ocean views.

This restaurant is adjacent to The Mermaid, which acts as the bar for Killer Shrimp. “It’s an iconic bar that’s been on the beach in Hermosa for 65 years,” Michaels says. “It was an incredible neighboring gathering spot.”

Killer Shrimp signed a lease on The Mermaid, rebuilt and revamped it. “It’s really just a fun concept to own,” Michaels says.

“People say, ‘Thank you so much for not killing The Mermaid.’”

Untouchable Flavors
Not only does Killer Shrimp set itself apart by using fresh shrimp, it tops it with all-natural ingredients that are simmered for 10 hours to create its spicy, secret sauce. “We [create] everything at our commissary in Marina del Ray,” Michaels describes.

“The signature Killer Shrimp dish is a guarded family recipe, I have a secret spice room, and the spices are packaged and shipped out from there,” he continues, noting that only one employee besides himself knows how to make them. “We’ve worked really hard to keep it that way.”

For the Fans
Killer Shrimp also has its Killer Cafe concept, a 24-hour location in Marina del Rey that features a full breakfast, lunch, dinner and cocktail menu, while also serving Killer Shrimp, as well.

“There has never been Killer Shrimp served outside the namesake [restaurants],” Marketing Associate Bryan Cole says. “It’s also the first time Killer Shrimp has ever been served 24 hours a day, so that’s something extremely huge for fans or those that are new to the product.”

Michaels notes that Killer Shrimp has a “fanatical” fan base. “People love what we do,” he says. “They love to bring people here and turn them on to the Killer Shrimp business.

“It’s just one of those experiences you’re not going to get anywhere else,” Michaels continues. “[The shrimp is] so unique and flavorful, and an explosion in your mouth.”

Branching Out
Killer Shrimp has its eyes on further expansion. “We are currently building [a restaurant on] Las Vegas Boulevard and a location in the meat packing district of New York City,” Michaels says. “We also have locations in San Diego, San Francisco and Sherman Oaks, [Calif.], that are in the works as well.”

But the Hamlet suffered from poor management over the years, hurting the brand. “At one point, it was liquidated,” Michaels says.

“When it sort of ground to a halt, we were able to buy it with one pre-existing location left. We are planning to open it nationwide.”

Another iconic L.A. brand Michaels plans to revive is Tail O’ the Pup. “It was a hot dog restaurant on the corner in Beverly Park for many, many years,” he recalls. “It has been there since the ‘40s.

“We plan to do a national roll out, starting with locations in the valley here as well as a location in downtown L.A.,” he says. “We’re looking at putting those in airport terminals.”

The majority of Los Angeles natives, Cole asserts, hold these brands close to their hearts. “It’s been difficult when all these historical landmarks are wiped off the face of the planet,” he says.

“Kevin and Brett are bringing back those legendary restaurants, which nobody else is doing. Most restaurateurs and developers want to tear everything down.”

Michaels agrees. “The landscape of L.A. is to kill everything and make it new and flashy,” he says. “But we can still grab the nostalgia of the Hamlet [and Tail]. Those are still incredible brands with incredible concepts.

“We want to be the guys that bring these brands back,” Michaels says. “[If there are others], we would be interested in purchasing those and bringing them back as well.”

Michaels sees further growth for Killer Shrimp beyond its planned locations. “I’d love to have people eat Killer Shrimp all across the country,” he says. “The brand has been in our family for 28 years.

“I have daughters and I’d love to see Killer Shrimp in our family for another 30 years,” he says. “Our goal is to expand, get a good stronghold of 10 to 15 restaurants around the nation, and look at the whole thing [and determine] what’s the next step.”