Back to Profile Gallery > Kohl Wholesale 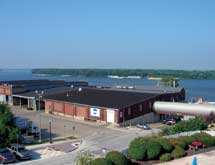 As an independent, family owned company in an industry dominated by large, national corporations, Kohl Wholesale stands out in the distribution world. “There’s fewer companies like us around now than there were 20 years ago,” says Greg Whitney, director of marketing for the Quincy, Ill.-based company. “What sets us apart from our more than 60 competitors is our go-to-market strategy, which is our true emphasis on service to the customer.”

A commitment to customer service is one of the principles that have long defined the company. Kohl Wholesale is owned and led by brothers Rick, Mark and Matt Ehrhart, representing its fifth generation. Dick Ehrhart, the fourth generation, is also very active in guiding his three sons.

The family’s leadership is credited with the company reaching its 140th anniversary this year.

“Our owners are what has brought us to where we are at today,” Whitney says. “Because of them, our future is bright, and we’re setting the goal to turn the company over to the next generation. We’re celebrating our 140th anniversary now, but we hope to eventually celebrate our 175th and beyond.”

‘Above and Beyond’
The company is a broadline distributor of more than 14,000 foodservice products including fresh and frozen beef, pork, veal, lamb and poultry; frozen entrees and soups; specialty cheeses; fresh and frozen fruits and vegetables; dry groceries; kitchenware and equipment. Kohl Wholesale serves more than 3,500 customers including restaurants, hotels, supermarket delis, schools, hospitals, retail groceries, caterers and other businesses in Illinois, Missouri and Iowa. The company opened a retail outlet, Kohl Cash and Carry, in 2000 to further broaden its presence in its community.

All of Kohl Wholesale’s customers receive personalized service at a level that many of Kohl’s larger competitors are unable to provide. “We make every effort to support our customers in every endeavor they have,” Whitney says. “We offer service above and beyond the price of a case; it’s all about how we can help our customers with their business.”

Specifically, this means providing value-added services including menu development and waitstaff training, as well as marketing services that help customers increase their social media and Internet presence. “We feel our competitors are not as concerned with helping our customers stay in business as we are,” he adds. “We feel our customers’ success ultimately contributes to our own success as a business.”

Visionary Leadership
Kohl Wholesale has evolved significantly throughout its history. The company traces its origins to 1857, when founder Nikolaus Kohl arrived in the United States from Germany and started working in a wholesale grocery business in Quincy, Ill. Kohl’s industrious nature led him to purchase shares in the business in 1873, and Austin and Kohl Grocer Co. Importers was founded. Kohl’s partner, Thomas Austin, retired in 1896.

Kohl and his four sons continued operating the company as Nikolaus Kohl Grocer Co. Importers, Wholesale Grocers and Coffee Roasters. The business became one of the largest coffee roasters in the country as well as one of the Midwest’s best-stocked wholesale grocery establishments.

Over time, the company continued to grow and evolve in no small part thanks to Dick Ehrhart, who marked his 75th year in the business in 2011. Ehrhart spent several years investing in the company and buying shares from other family members, ultimately becoming the sole owner in the early 1980’s, Whitney says.

Ehrhart’s three sons maintained their father’s discipline and commitment to honesty and integrity while also taking a visionary approach to the company after becoming co-owners 30 years ago. At the time, broadline distribution was becoming more prevalent in the distribution industry, leading the brothers to acquire several other companies to expand its own offerings. These include meat, small wares, equipment and supply companies. The company renamed itself Kohl Wholesale in 1985 to reflect its expansion and focus on broadline distribution.

The Ehrhart family’s visionary nature is also apparent through the company’s regular investment in technology. This includes purchasing remote headsets for warehouse personnel as well as a GPS system that allows for tracking of the company’s fleet. “Our owners continue to look at the future and make sure we’re prepared for it,” Whitney says.

Elevated Stature
Kohl Wholesale continues to expand its presence in the distribution industry. In 2009, the company became a member of UniPro Foodservice Inc., a nationwide purchasing, marketing and operating services organization for independent foodservice distributors.

The company’s membership in the organization allows it to offer customers local, responsive service while also providing it access to thousands of exclusive items. “Our membership in UniPro gives us access to better pricing from manufacturers, which allows us to compete with national distributors,” Whitney says.

The affiliation with UniPro also gives Kohl Wholesale access to programs and services including freight logistics, internal sales and customer training. UniPro comprises 297 independent foodservice distributors with more than 550 locations. The organization says this large distribution network offers cost-competitive alternatives and gives it greater flexibility than many of its corporate distributor counterparts.

“UniPro members recognize that in a competitive environment, the whole is greater than the sum of its parts,” Kohl Wholesale says. “This solidarity enables us to leverage impressive purchasing volume in excess of $61 billion in collective sales, resulting in competitive pricing for our customers. “Through UniPro, we can provide local market sensitivity with national clout; purchasing power, global sourcing, and an array of programs and services.”

These programs provide members with the tools they need to maintain a competitive market position and assist customers in meeting their growth and profit aspirations, Kohl Wholesale notes.

The organization in 2010 named Kohl Wholesale its distributor member of year. “UniPro has helped us leverage our position in the industry and given us national recognition, while we focus on our three-state trade area,” Whitney notes. “This recognition has elevated our stature and allowed us to gain more time and attention from our other business partners.”

Kohl Wholesale’s business partners include more than 650 manufacturers and other vendors. The company relies on these vendors to meet its customers’ needs, Whitney says.

“We know we can’t be successful on our own, so we lean on our partners,” he adds. “We lead with what our customers want, and carry more inventory than our competitors.”

The company’s strategic partnerships and investments will continue to guide it well into the future. “We’ve set a goal to double our business in the next seven years, and think we can achieve that,” Whitney says.

Although part of the company’s success can be attributed to having great business partners, Whitney says the company is “truly blessed” to have a team of outstanding employees.

“Every day our senior management team leads with the thought that we have 320 families to support, or 320 employees, many of whom have worked at Kohl Wholesale for decades,” he adds. “Without their individual contributions, 140 years would not have been possible.”