Back to Profile Gallery > L. Dicks 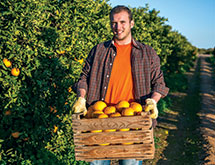 For years, nutritionists and parents alike have championed the nutritional benefits of orange juice. Many consider it a staple of a healthy breakfast. Yet it seems as if the challenges of producing it have never been greater. “There’s so much competition for beverages,” L. Dicks President Richard “Rick” Dicks points out. “You go to the grocery store, and the No. 1-selling beverage is Coke, and No. 2 is Pepsi. You can’t tell me they’re more healthy for you than orange juice. I think orange juice is one of the most healthy fruit drinks.”

He attributes the struggle to keep orange juice a popular beverage to the massive marketing budgets of huge corporations producing competitive drinks and the challenges of labor in the citrus market.

“Our shelf space in supermarkets is going down, and our sales are going down,” Dicks explains.

Nevertheless, L. Dicks has been growing and distributing citrus in central Florida as a company since its incorporation in 1966. Dicks’ father, Leonas Dicks – whom everyone called “Bee” because he was so active as a child – went into the business after returning from World War II. The company is an intermediate handler of oranges in central Florida that the state classifies as a citrus dealer. Rick Dicks estimates that the company will handle approximately 2.5 million boxes of oranges this year.

“We grow our own citrus and buy and sell oranges from the growers and deliver them to the juice-processing plants,” Dicks explains. Some of the oranges are for sale fresh to consumers, but Dicks estimates 95 percent are sold for juice.

“Typically, when we are selecting oranges for fresh fruit, we want to pick the prettiest on the outside that are most colored and cleanest,” Dicks says. “When you pick oranges for fresh, you put them in a different container in the field. As far as interior quality, it’s the luck of the draw. But they want the appeal of the fruit to impress the buyers. So some of the juice oranges we put in taste better than the ones that go for fresh.”

L. Dicks not only distributes oranges for others, it also procures and manages the labor to pick customers’ oranges. “It’s hard work – I’ve done it quite a bit,” Dicks says. “You have a bag you put around your neck and climb up a ladder and pick the oranges by hand.”

Each bag is emptied into a bin, and when 900 pounds of oranges are in it, it is dumped in a truck. When the truck has collected 10 bins of oranges, they are loaded with 45 others onto a trailer and hauled to the juice plant. The juice plants have automated machinery to process the oranges by size, remove their juice and send the byproducts from peels and pulp – such as oils and essences – for processing. The water is extracted to produce concentrate. “Today, Florida sells approximately 80 percent of its juice as not-from-concentrate,” Dicks says. “The balance is sold as concentrated orange juice that the consumer adds water to reconstitute it.”

Labor Challenges
Among the challenges of the orange business is finding labor and fighting diseases and freezes that threaten the crop. The H-2A temporary agricultural program enables Dicks to obtain the labor needed for harvest. “We can’t find Americans who want to work that hard,” he maintains. “We’re not taking jobs away because we have to advertise in all the local newspapers and advise anybody who wants free housing and a minimum of $10.26 an hour guaranteed for so many hours a week that they get priority. I don’t think we’ve had anybody come to work for even a week.

“But the people coming here are making probably four to five times what they make in a day in Mexico,” he asserts. “I’m aware of that because I lived in Mexico for two years. Back in 1968 to 1970, I was serving as a missionary in southeastern Mexico and learned the language to work with people. It was one of the great experiences for young men, and I’m glad I did it.”

That also enables him to work successfully with his labor force, which he provides motel-quality housing for and pays $2.50 more than the minimum wage. “We spent over $1 million and built a labor camp for 120 men,” Dicks says.

Citrus Diseases
More so than freezes – the last serious one in Dicks’ area was in 1989 – diseases such as citrus greening and citrus canker are threatening his trees and lowering production. Dicks estimates that citrus greening – which is spread by the Asian citrus psyllid – cut Florida’s citrus production by half over the last 10 years. Research is continuing to fight the diseases, but no cures have proven successful yet.

Other challenges include investors outside the citrus industry, such as large hedge funds, buying up orange groves. Additionally, the rising dollar is making selling their orange juice in the U.S. more attractive to foreign suppliers and increasing competition from Brazil and Europe. The amount of orange production is decreasing not only due to disease but also because valuable orange groves are being sold for their real estate value and being removed. The number of juice plants in Florida is shrinking due to industry consolidation.

Nevertheless, Dicks is thankful for his success, which he attributes to “hard work, being blessed by our heavenly father and having a lot of good people working with us. We could never have been successful without all the people working with us. My dad always emphasized, ‘Treat people like you want to be treated, and keep your good reputation and name. If your word is no good, you’re no good.’”