Back to Profile Gallery > Laird and Company 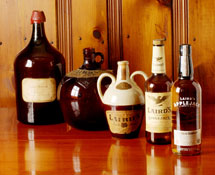 Very few companies can claim George Washington and Abraham Lincoln among their past customers. With more than 232 years of continuous operation and roots going back even further, Laird and Company can stake a place in American history as the nation’s first commercial distillery.

The Scobeyville, N.J.-based company today produces Laird’s Applejack brandy in much the same way as it has for centuries. “We’ve continued with the same distilling methods and basically the original recipe,” notes Owner and Vice President Lisa Laird Dunn, a descendent of William Laird, who first produced Apple¬jack for friends and neighbors after emigrating from Scotland in 1698. One member of the Laird family, Robert Laird, served in the Revolutionary War under Washington and supplied troops with Applejack from the family’s still behind the Colts Neck Inn in Colts Neck, N.J.

The company’s first commercial sale came in 1780, and sales flourished as Applejack made its way across the young nation, including to Springfield, Ill., where Lincoln served it for 12 cents a half-pint in his tavern, the company says. The distillery remained in Colts Neck until 1849, when it moved to Scobeyville following a fire. Today, distilling is performed in North Garden, Va., with final production performed in Scobeyville.

Laird and Company remains 100 percent family owned. “We tend to have very long-term employees including fathers and sons and mothers and daughters here,” Laird Dunn says.

High Quality
Laird and Company uses a wide range of apple varieties as the source for its products. The company uses a 100 percent natural fermentation process, with no additives. “Only carefully selected, whole, tree-ripened apples can be used in the making of Laird’s Applejack,” the company says. “Many varieties of apples are used, including Jonathans, Winesaps, Stay¬mans, Pippins and Delicious apples. Applejack is made at the peak of the apple harvest in early September to mid-November – this ensures the quality and sweetness of the apples are at their peak.”

In addition to its flagship product, Laird and Company produces other spirits including vodka, gin, tequila, whisky and amaretto. Other varieties, proofs and ages of apple brandy are also distilled. “Just about every spirit type you can think of we have a label for,” Laird Dunn notes.

The company’s brands include Banker’s Club, Five O’Clock and Senator’s Club. Laird and Company also imports a number of spirits and wines. Most of Laird’s products are distributed nationally, with Laird’s Applejack distributed internationally. The company began exporting the brand in 2005 to the United Kingdom, and recently expanded to Australia, Germany and Sweden.

‘A Wonderful Resurgence’
Laird and Company has seen a number of major changes in its customer base throughout its long history. “This is a cyclical business,” Laird Dunn notes. “Our heyday was after Prohibition and the World Wars, and as we moved into the 1970s and 1980s, consumers started to move away from brown whiskeys. In the 1990s and the last decade, we’ve seen the consumer coming back to brown whiskeys, which is a direct result of the renewed interest in the classic cocktail.

“We’ve experienced a wonderful resurgence, and sales have increased dramatically not only internationally but nationally, with our market share expanding,” she adds.

The company is ready to capitalize on this. “We’re the only company nationally that has continued to produce Applejack in any great quantity for the past several years,” Laird Dunn says.

Company expansion plans for 2012 include introducing new products and entering new international markets. “Interest has really been phenomenal over the past five years,” she adds.