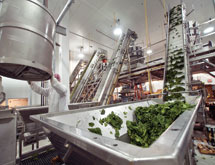 When John and Dave Gates started Lancaster Foods LLC more than 20 years ago, they had only one truck serving a small customer base in Pennsylvania. But when Lancaster Foods was acquired by Guest Services Inc. – a private hospitality management company based in Fairfax, Va. – in 1992, it gained the resources it needed to expand its business. Today, Lancaster Foods’ fleet exceeds 90 trucks, and its customer base stretches across the entire Eastern Seaboard. Despite the Jessup, Md., company’s growth and success, one thing has remained the same – its commitment to quality and service, says Jerry Chadwick, vice president of sales & marketing and business development.

“Many of the supermarket chains that we supply, we have been supplying for as long as the company has been in existence,” he notes. “When you think of something that has as high of a turnover as produce – and your reputation is only as good as the last order you delivered – the fact that we enjoy longstanding relationships speaks to the satisfaction that our customers have in the quality of produce that we deliver and the services we provide. And because our customer base is so extensive, we’ve developed a unique ability to meet a broad spectrum of customer needs with an assortment of produce that is second to none.”

Two years ago, Lancaster Foods built a state-of-the-art, 220,000-square-foot warehouse and fresh-cut processing facility with cutting-edge machinery that has “put us in a whole new business arena,” Chadwick says. The company now cuts and processes fresh produce for major supermarket chains’ private labels. For instance, it produces packaged sliced apples under the Motts brand and processes salad greens under the Glory label. It also supplies to major foodservice distributors that serve area restaurants. “It’s very capital-intensive,” Chad­wick remarks, crediting Guest Services for enabling it to make these considerable investments. “We could not have done this and made these expansions to our facilities and our fleet – or it would have taken a significantly longer time – if we had done it as an independent company.”

A key reason for its decision to invest in a fresh-cut processing facility is to provide convenience and value to the consumer, he adds. “Increasingly, consumers want to buy bagged salads or little clam shell packages with six two-ounce packaged bags of sliced apples – perfectly sized for a child’s snack or lunch,” Chadwick says. “With the publicity and attention First Lady Michelle Obama has placed toward childhood obesity, it has increased the importance of fresh produce in children’s diets. This will have a positive impact on produce distributors and processors like Lancaster Foods that can meet the unique specifications of schools who need produce for their cafeterias.”

“A lot of companies distribute produce, but few have the expertise in sourcing organic produce from the grower/shippers or the ability to process and package it for supermarkets.

The company considers itself one of the leaders in organic produce distribution thanks to its long-term relationships with leading supermarket chains. “That’s been a driving factor in our sales,” Chadwick says. “A lot of companies distribute produce, but few have the expertise in sourcing organic produce from the grower/shippers or the ability to process and package it for supermarkets.”

Lancaster Foods’ commitment to sustainability and environmentally friendly procedures was demonstrated in its decision to seek LEED certification for its new warehouse and distribution facility in Jessup. LEED is the U.S. Green Building Council’s designation program for sustainable construction projects. “Being in the produce industry, we thought it would send a positive message about the importance of freshness and sustainability to our customers,” Chadwick says. “We are very proud of being LEED-certified.”

Produce distribution tends to be localized, but Lancaster Foods continues to push its range of operations geographically. “We are probably the only produce distributor that can make the legitimate claim to serve the entire Eastern Seaboard,” Chadwick asserts. “Historically, produce distributors handle regions, but our trucks are going from New England to Florida every day. That’s one thing that sets us apart from our competition – we’ve always put a great deal of emphasis on our supply chain capabilities.

“Our ability to turn around an order and deliver it quickly and accurately to a supermarket chain that has a need for produce on a same-day or next-day delivery basis sets us apart, and it is not easy to do,” he adds.