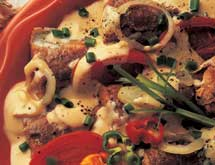 Although a mere mention of Jamaica often spurs thoughts of sitting beach-side with a cocktail topped off with an umbrella, life’s not always a beach on the island. The Caribbean hasn’t been immune to the world economic recession, but Jamaica-based Lasco Foods has worked hard to counter those effects.

“It’s very challenging all over the world, and Jamaica is no exception, with job losses and no increases in salary,” Marketing Manager Peter Chinn notes. “But we’re one of the few companies that are really improving sales and products. Many food companies are losing, but we’re staying aggressive in our sales activity.”

The company’s focus on top-notch products has helped it weather the storm. “We’re bringing quality products at the lowest price, and that is why in this economic turmoil, Lasco has done very well,” Chinn says. “This is not our first experience with economic turmoil, but we always do very well.”

For 20 years, Lasco Foods has been distributing a variety of products island-wide, as well as to the rest of the Caribbean, India, Canada, the United States, Central America and the Middle East. Chin notes that the company also is expanding to include all of Europe and some of Africa, and he expects the business to grow by 50 percent in the next one to two years.

Lasco also is Jamaica’s market leader in infant formula, peas, beans and other products, Chin notes. The company makes its clients happy by offering quick delivery through its own distribution arm, Lasco Distribution. He explains that Lasco owns some distribution vehicles, but most of the delivery is subcontracted.

“We have a commitment to deliver island-wide within 24 hours, and closer regions at under four to six hours in the metro area,” Chin says. “We have been meeting our distribution targets.”

Not only does Lasco deliver promptly, it also has implemented efficient processes and reduced order times significantly. “From inception to distribution, we are about 30 to 40 percent more efficient,” Chairman Lascelles Chin says. “There are many aspects to the business that we measure to maintain efficiency.”

In addition to reasonably priced products and quick service, perhaps Jamaicans are loyal to Lasco because of the company’s active work in its communities. It sponsors schools, teachers, nurses and police, and is involved with many sports teams.

“We’re one of the most beloved companies now because we get very involved with the community here,” Chin says. “We’ve made sacrifices, and the public appreciates them, and they’re all grateful to us.

“Our philosophy is that if we’re making profit, we should pass on some of this profit to the community. That’s why we’re popular here – we’re one of the most appreciated and popular companies in Jamaica.”

Lasco Foods knows what it’s like to be on a budget – the business was started on just 175 pounds – so it empathizes with today’s consumers, who are more cash-strapped than ever. “As much as we can, we lower the price to the consumer in a time when the economy is very bad worldwide,” Chin says. “Customers’ disposable income has been lowered, so we have to keep our prices low so they can manage and survive.”