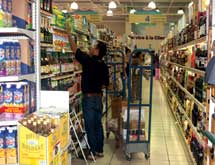 Selection and freshness are two of the most important keys to success for a supermarket chain, and that goes double in places like the islands of the Caribbean. Unlike mainland supermarket chains, which have relatively easy access to fresh produce and a wide variety of items, supermarkets like Le Grand Marche on St. Maarten have to work that much harder to keep their shelves stocked and their customers satisfied. According to General Manager Kyle Cummings, it is Le Grand Marche’s ability to do that that has made it the largest supermarket chain on the island.

The company opened its first location in 2002 – its name in French means “the big supermarket.” Two additional locations were opened in 2006, and its most recent store was opened in 2010. Since its inception, Le Grand Marche has become well-known for its selection and service, and was named the best supermarket on St. Maarten by newspaper The Daily Herald four years in a row.

Cummings says there are approximately 200 mini-markets and supermarkets on St. Maarten that compete directly with Le Grand Marche. However, none of them can match Le Grand Marche in terms of selection.

There’s more to being the best than simply being the biggest, and Cummings says there are many reasons why Le Grand Marche stands head and shoulders above the competition on the island. One of the most important reasons is that Le Grand Marche has its own distribution company under its  corporate umbrella.

“Because our sister company is a food distributor and has most of the national brands, we have the largest variety of any supermarket on the island,” Cummings says. “We pride ourselves on being No. 1 and offering the customer everything.”

Not only does Le Grand Marche provide customers with all the same leading brands and products found on the mainland, it also caters to the unique cultural makeup of the island. Because St. Maarten is half governed by France and half by the Netherlands, residents appreciate the fact that Le Grand Marche also stocks products both nationalities are familiar with.

“We’re one of the only supermarkets that fly in products from Holland and France weekly,” Cummings says.

More than 40,000 unique SKUs are available at Le Grand Marche’s stores. Among those are a selection of more than 2,500 wines from around the world, including France, Spain, California, Chile, Argentina and Africa. Cummings says the chain also is one of the only stores on the island to offer certified Angus beef.

Le Grand Marche is following emerging trends, as well. Cummings explains that the company recently created an organic and certified-organic produce section at its stores, and has expanded its organic food offerings significantly. “A lot of people on the island are becoming a lot more educated about what they eat, and as a result are starting to shift into more organic foods,” he says.

At the same time, as the company makes efforts to adjust to customers’ changing tastes, Le Grand Marche has to deal with the stark economic realities facing all supermarkets during the recession. “The island economy has definitely suffered, so keeping our core customers satisfied with low pricing and trying to stay competitive with everyone is one of the largest challenges that we face everyday,” Cummings says.

Although certain staple foods have their prices controlled by the government, Le Grand Marche is under intense pricing pressure on almost everything else from its smaller competitors. To keep customers from leaving for the low-cost alternative and to reward them for their loyalty, Le Grand Marche has its Customer Advantage program. Customers who belong to this program get back 10 percent of whatever they buy.

Cummings says the future looks strong for Le Grand Marche, as the company continues to find new ways to cater to its customers and give them a shopping experience unlike any other. He says the company’s stores feature food courts with more fresh and ready-to-eat products that cater to more discriminating shoppers.

“We find that it’s a more intimate shopping experience for our customers,” Cummings says. “In the future we’ll be looking at expanding that.”

The company also has plans to expand geographically. “We’re definitely interested in expanding across the Caribbean as far as opening stores and giving the islands’ supermarkets choice and selection that they haven’t seen in the past,” Cummings says.