Just around the corner is a restaurant where you can step out of the hustle and bustle of life and into the serenity of a lifestyle brand where people can share moments and reconnect. The cozy atmosphere inside Le Pain Quotidien is accentuated by communal tables and handcrafted woodwork made from reclaimed wood in Belgium.

“It’s a very uniquely positioned guest experience that I think many people in today’s fast-paced life are craving,” U.S. CEO Doug Satzman says. “We have wholesome food in a beautiful environment with friendly service that you can feel good about bringing your family to or just meeting friends.”

Le Pain Quotidien is a lifestyle occasion brand that appeals to many health and wellness guests by creating simple recipes made with real ingredients, Satzman says. “It’s not a themed Belgium, French or European restaurant,” he adds. “Our menus are designed in terms of taste and nutrition. Instead of chasing every food trend, we have been seeking high-quality ingredients from organic and local farmers for over 25 years. We honor a level of authenticity and honesty that is hard to find in today’s industrialized and processed world.” 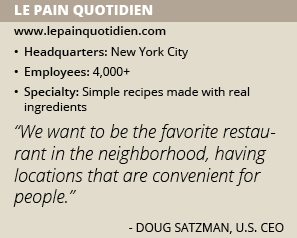 Chef Alain Coumont opened the first Le Pain Quotidien in 1990 and within a few months opened 10 more locations to serve the classic, rustic loaves of bread he grew up with. Seven years later, Coumont opened a flagship bakery on Madison Avenue in New York City. Today, there are more than 230 corporate and franchised restaurants in 18 countries, and six more locations are expected to open this year. “We want to be the favorite restaurant in the neighborhood, having locations that are convenient to where people live their lives,” Satzman says. “We want a nice patio and to be located on the sunny side of the street in a charming building or on a cozy corner.”

Tailored Service
Le Pain Quotidien prides itself on providing tailored customer service. “For example, if you are having a relaxed meal with friends and then decide that it is time to leave, one of the biggest delays in full-service dining is the time it takes to flag down your server, then they go get the check, you pay and they make change or swipe the card,” Satzman explains. “We launched a Pay-At-The-Table option in our app. Your server brings you the bill, you scan it, touch the tip amount and sign with your finger, then walk out and receive a receipt in your inbox. That can take 10 minutes off the close of your dining experience.”

The company rolled out its mobile app less than one year ago and about five percent of its customers are paying with it. That number continues to grow and Satzman says the early adopters love it because it saves them time and incorporates a loyalty program. “It’s not about whipping people in and out, but where we can add convenience,” he adds. “Customers can preorder from the app by telling it they want to pick up their croissant and cappuccino tomorrow at 9:15 a.m. at any LPQ, and it’s there waiting for you.”

On the retail side, Le Pain Quotidien trains its staff to be more efficient and reduce customers’ wait times. “We implemented asynchronous receipts, and the idea is that while your receipt is printing I can start working on the order of the person behind you,” Satzman says. “That saves time for the second or third person in line.”

Green Initiatives
Le Pain Quotidien ran a pilot program in New York City last year certifying 43 of its restaurants as CO2 Neutral, a CO2logic initiative. “By choosing for CO2 neutrality, a company or organization chooses to take responsibility for the true impact of its CO2 emissions instead of shifting it to society,” the organization says.

CO2logic, an independent climate advisory organization, identified Le Pain Quotidien’s main CO2 emission sources and opportunities to reduce them. It found that electricity and emissions from the food supply chain – agriculture, packaging and transport – were its top-two emission producers. Electricity represents the lion’s share, which is used for lighting, cooking, heating and cooling.

In response to its findings, Le Pain Quotidien now uses LED lighting in all 90 of its U.S. locations, which has reduced its energy consumption by 60 percent and its carbon emissions by 168 metric tons. To offset the remaining climate impact from its New York and Connecticut restaurants, Le Pain Quotidien is supporting a Gold Standard-certified climate project in Africa. The offset project distributes heat-efficient cooking stoves to reduce wood consumption, prevent deforestation and improve the livelihoods of families in Africa.

Moving forward, Le Pain Quotidien believes doing good is good for business, and that it prospers when it takes care of its people and the planet. “This formula is working great for us: do good for our bodies, our communities and our environment,” Satzman says. “We are positioning ourselves to double the size of our footprint in the U.S. over the next three to five years and will be entering three new markets in the next two years.”