Back to Profile Gallery > Les Nomades 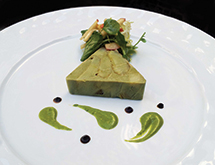 Les Nomades means the nomads in French – a somewhat ironic name for a restaurant that is a mainstay of the Chicago dining scene, having operated since 1978 out of a historic 1891 brownstone.

Unlike its name, the long-tenured Les Nomades isn’t going anywhere. In fact, its Old World décor and formal style are hardly relics of bygone fine dining, but rather refreshingly counter-trend in an age when top chefs are going downscale with casual, noisy restaurants and even food trucks.

Les Nomades is not stuffy or snobby, just respectable and elegant, according to owner Mary Beth Liccioni. And very romantic.

“Our service is formal – we follow certain rules of behavior,” she says, “but our service is warm and the environment comfortable.”

The dining rooms are adorned with original artwork, antique light fixtures and period furniture. The rooms have hardwood floors, wood-burning fireplaces and banquettes.

Guests linger over their three-, four- and five-course meals, all from prix-fixe menus. “Meals here move at a leisurely pace,” she says.

Worldly Chef
The cuisine is French, but far from old school. The chef, Roland Liccioni, is the most nomadic facet of the restaurant and he brings his far-flung influences to his cooking. “Roland uses classic techniques to be sure,” Liccioni says, “but his menu is not a throwback to 19th-century French cuisine.”

Roland was born in Saigon in the 1950s and moved to Biarritz, France when he was two. At the age of 13, he began a course of study at L’Ecole Hotelier de Biarritz-Les Rocailles. He worked at the Brasserie Bofinger in Paris, then at the Waterside Inn, a Michelin three-star restaurant in England. In the 1980s, he came to Chicago and worked at Alouette in Highwood, then Carlos in Highland Park. He then joined Le Francais in Wheeling, where he became an award-winning chef.

In 2000, Roland took over the kitchen at Les Nomades and headed it for a few years, returned to Le Francais for a time and had stints at other restaurants, before returning for good to Les Nomades in 2011.

Front of the House
Like the restaurant, Mary Beth is a long-time Midwesterner. She attended culinary school in downtown Chicago and worked as a pastry chef at Carlos, where she met and formed a partnership with Roland. In 1989, the couple acquired Le Francais; Roland was the chef and Mary Beth ran the front of the house, where she discovered her greatest talents lie.

In 1993, she acquired Les Nomades and has been its director ever since, although she didn’t relinquish her role at Le Francais until 1999. While she and Roland are no longer married, they still have a great working relationship, she says, and she welcomed his return to her kitchen nearly three years ago. “I understand how he works and I have great respect for him,” she says.

There are 11 tables on each of the two dining room floors, and a total of 75 seats, but the rooms are never entirely sat at once. The restaurant can accommodate private parties of about 40.

The third floor of the townhouse is office space; the temperature-controlled basement is a wine cellar. Les Nomades has been awarded Wine Spectator’s Best Of Award of Excellence for the last 10 years in a row.

Are there big changes to come at Les Nomades? No, Liccioni says, and that’s the point. “What we are doing,” she says, “is worth preserving.”