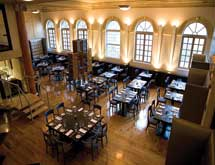 For Nick Di Donato, working in the restaurant business started as a means to an end: Make some money, pay for school. He did just that, but after several years as an engineer, he went into the restaurant business again. Only this time, he partnered with his brother, Pat Di Donato. For Pat, who boasts 30 years of experience in the industry, working in hospitality was always the goal.

In 1986, the two ventured into business together with P.M. Toronto. It was a trial-and-error operation for the brothers, but the sports bar became a success by catering to hockey fans who were missing out on the live action at nearby Maple Leaf Gardens.

He left engineering to become president and CEO of Liberty Entertainment Group. That decision led not only to a second P.M. Toronto but the Toronto-based entertainment empire that exists today. After blanketing Toronto’s downtown with 10 separate venues, including restaurants, night clubs and event facilities, the group has ex­panded into the backyard of Canada’s neighbor to the south with the re-opening of the Coral Gables Country Club in Miami. The facility includes the Liberty Caffé and the Coral Gables Athletic Club in addition to the special event space.

Since its 1924 debut, the Coral Gables Country Club has been a members-only facility. Most of the community’s residents never had stepped into the facility; that is, until Liberty Group acquired the property from the city of Coral Gables in 2008.

“For us, this was a jewel,” Nick says. “It’s a special, classic building that has this historical aspect but was still brand-new to so many people.” After a year-long renovation process, the country club reopened in November 2010 as a state-of-the-art, historic-yet-modern events facility that is open to the public.

The 45,000-square-foot building has five rooms to hold every occasion from the most elaborate of weddings to the quaintest luncheon. For its grand opening, the Liberty Group held a private launch party and art exhibit with more than 1,000 guests, including local politicians. In December, the group held a Christmas brunch attended by locals who can finally enjoy the once-private establishment.

Since 1987, Nadia has implemented what Nick says is an age-old rule in the entertainment business. “In this industry, it’s a given that you need to change to stay the same,” Di Donato says. “If you have the same old, same old, in five years you will no longer be the place to be. We change gradually with the times how we provide style and food to fit with the current environment.”

The Liberty Group has a knack for making the old new again while still retaining reverence for historical sites. The Coral Gables Country Club may be its first venture outside of Toronto, but it’s the company’s fourth historic restoration. Liberty Group has operated the restaurant and event space the Rosewater since 1996, which has received recognition for its exceptional cuisine, quality of service and sophisticated atmosphere. It’s suitably located near downtown Toronto’s financial and theater district and like the country club, it has rooms to accommodate an array of occasions. The 22-foot ceiling in the main dining room is highlighted by hand-painted cornice moldings and complemented with hardwood floors making the space ideal for cocktail receptions, while the White Room downstairs provides an intimate setting for exclusive tastes.

Other historic venues include The Liberty Grand Entertainment Complex, which can host 5,000 people. This opulent events facility with a lush courtyard was once owned by the city of Toronto and used only three weeks out of the year. There’s also the Courthouse, previously a justice institution turned fashionable nightclub boasting an extensive celebrity gallery. These are just examples of a few venues inside the diverse Liberty Group portfolio.

Outside of the Coral Gables Country Club, all of its venues are located in Toronto, but that is something the company is hoping to change soon. Liberty says it is looking to expand two of its newest restaurants, Spice Route and Ciao Wine Bar.

Spice Route serves Indo-Chinese cuisine and spiked teas in a venue where the dramatic lighting showcases the grand intricacies of the restaurant’s eclectic Asian  inspired design. While Spice Route awes Toronto with its exotic atmosphere, Ciao Wine Bar draws customers in with its contemporary rustic charm. Ciao serves authentic Italian fare and wines for every pallet from countries such as Canada, France and, of course, Italy.

“Ciao and Spice Route are great concepts and are working very well,” Di Donato says. “We developed these concept, specifically because we wanted something that could work well in Miami.” Now that the company has a solid Miami team stocked with sales professionals and an executive chef, the only missing piece is the right property.

“We’re definitely on a growing curve right now,” Di Donato says. “Even though it’s a recession, it’s still a good time for opportunity. There are better leases, more room for negotiation, and if you have a good business sense you can grow. After all, if it wasn’t for the recession, we wouldn’t have this country club.”