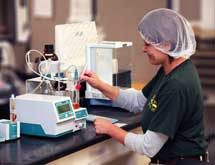 Located on the southwestern edge of the U.S. Corn Belt, LifeLine Foods LLC stands apart from other companies in the corn processing industry because it operates a unique business model that extracts maximum value from the corn kennel to benefit not only the food industry, but the fuel industry, as well.

The St. Joseph, Mo.-based company was established in 2001 by AgraMarke Quality Grains, a progressive cooperative that now consists of more than 600 producers, landowners and agriculture-related businesspeople. The group acquired a grain handling and processing facility formerly inhabited by Quaker Oats and converted it into a dry corn mill capable of separating grains in order to target specific food groups with corn-based ingredients. Its byproducts were sold to the feed market.

A few years later, LifeLine Foods and ICM Inc., the world leader in ethanol facility design and engineering, formed a joint venture to transform the corn mill into the country’s first corn-processing plant that utilizes a proprietary technology developed by ICM to produce food and fuel simultaneously.

“In 2007, AgraMarke and ICM completely modernized all of the milling machinery and processes, and simultaneously added a 50 million-gallon ethanol plant so that the byproduct produced by the corn mill could be sent to produce high-value ethanol and high-value feed product,” Vice President Dr. Matt Gibson says. “Although we produce ethanol, our primary focus remains on high-quality food ingredients for discriminating customers.”

In addition to ethanol, LifeLine also creates corn oil for the biodiesel industry, thus enabling it to cut down on waste while expanding its market reach. “We are recognized as leading food producers that don’t waste anything,” Gibson asserts.

Endless Applications
Today, AgraMarke Quality Grains maintains a 51 percent ownership in the business, and ICM owns 49 percent. “Because our farmers have primary ownership in the company, they take pride in the business and make sure they provide the best corn they have,” Sales Analyst Alycia Nelson notes. “These are large, progressive farmers who are very sophisticated and have a vested interest in the success of the company.”

In addition, LifeLine produces pre-gelatinized flour/binder, which acts as a binder, carrier and thickener for soups, dairy blends and breading and batter mixes. The company also makes industrial binder, which has been precooked under controlled heat and mechanical pressure.

‘Leaner and Meaner’
In the past six to nine months, LifeLine has undergone some leadership changes to better address the changing marketplace, Gibson says. He, along with President and CEO Robin Venn, recently joined the company to embark on its new strategic plan for continued growth. “We have gone through a complete reevaluation of our position in the marketplace and our internal processes,” he remarks. “We are getting leaner and meaner, which is what you have to do to survive in this economy. We are learning how to do more with less and optimizing our operations to implement these new changes.”

“We are taking the time to look at difference processes so that we can ad¬dress new trends,” Nelson adds.

One of LifeLine’s strategic goals is to double its prime food production. “That’s a big hill to climb,” Gibson admits. “But our attitude is very progressive and aggressive. Since we are a small, privately held facility, we are able to provide service to both our domestic and international customers that goes above and beyond what most of these large, multisite suppliers do. We are here to supply what our customers need.”