Back to Profile Gallery > Limoneira Co. 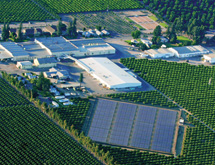 There are plenty of ways Limoneira Co. differentiates itself from other agribusinesses in the United States. The company stands alone through its sustainable business operations, its quality control methods and the rigorous traceability processes in place for its citrus produce.

However, the ability to understand what it takes to stand out from the rest in the crowded citrus-growing industry comes over time, and there aren’t many producers that can boast continuous operations for more than a century like Limoneira can.

“We have a little bit of a leg up because we’ve been around since 1893, so we’ve been doing this for 120 years,” President and CEO Harold S. Edwards says. “We’ve been pretty successful at being a sustainable business, and our business practice is to have good, sustainable suppliers.”

The company traces its origins to 1893 when Union Oil founder Wallace L. Hardison partnered with Nathan W. Blanchard to purchase 413 acres of land from J.K. Gries in Santa Paula, Calif., about one hour north of Los Angeles. The partners envisioned becoming the first large-scale citrus supplier for U.S. markets, so Limoneira – which means “lemon lands” in Portuguese – developed a more reliable supply chain for citrus to ship to the East Coast. In its early days, the company also supplied Valencia oranges and walnuts.

Edwards says the company supplies product all over the world, with 21 percent of its distribution heading to foreign markets, especially Southeast Asia. Limoneira owns and operates 8,200 acres throughout California and has added pistachios, and cherries to its offerings. About 70 percent of the company’s lemon business comes from foodservices clients, with retail accounting for the rest of the sales.

Here Comes the Sun
Limoneira takes pride in its status as a sustainably operated agribusiness, and Edwards says it strives to reduce its carbon footprint by making strategic investments in solar, water, soil and integrated pest management (IPM). “The company has had a commitment to good stewardship to resources since its inception,” Edwards says. “What we’ve found over time is our approach to production and the way we market and sell and work with employees have all been neatly captured under the popular trend called sustainability. We’re finding more and more of our customer base putting more importance on how their suppliers and vendors view sustainability, and we rank highly on their indexes.”

For instance, Limoneira relies heavily on solar power for the energy it needs to run its business. In 2008, Limoneira completed two state-of-the-art solar projects. At its headquarters in Santa Paula, the company installed a 5.5-acre photovoltaic orchard that generates 1 megawatt of electricity. Limoneira states that and this represents 60 percent of the company’s packing operations.

In Ducor, Calif. – about 150 miles north of headquarters – Limoneira installed four smaller solar installations that combine to generate another full megawatt of electricity. This powers 250-horsepower motors that pump deep well water into reservoirs for the irrigation of 1,000 agricultural acres.

Through these solar energy projects, Limoneira estimates that the solar generation of 84 million kilowatt hours will save at least 64,000 tons of greenhouse gases that would have otherwise been emitted by an oil- or coal-firing power plant over 25 years. Edwards states that 60 percent of all electricity Limoneira uses is generated through its investments in solar power.

As for its organic waste, Limoneira partnered with Agromin – a manufacturer of premium soil products and a green waste recycler in Southern California – for a comprehensive organic recycling program. The companies developed a 10-acre facility on Limoneira land to receive green materials such as lawn clippings, leaves and bark from Ventura County, Calif. The material is converted into mulch that is spread in Limoneira’s orchards to curb erosion, improve water efficiency, reduce weeds and moderate soil temperatures. This partnership recycles 90 percent of western Ventura County’s green waste to create mulch and compost for its use.

Also, for the water it needs to support its business, Limoneira maintains water quality and supply through rigorous lab testing, filtration systems and a network of micro sprinklers.

“All of this is being done with the highest level of detail and attention paid to food safety and traceability for the food products we supply,” Edwards says. “We’re the largest and only global GAP [good agricultural practices] tree-to-dock lemon supplier in the U.S., and that allows us to optimize procedures and provide instant traceability and of all the way to the blocks or trees where our produce comes from. This assures the highest level of quality in our food safety practices.”

Traceable & Accountable
Aside from the sustainable aspects of their operations, Limoneira and similar growers must adhere to the strictest traceability standards as set by foodservice and retail buyers throughout the United States and around the world.

“Consumers and as a result the trade – foodservice and retail buyers, specifically – have become increasingly more focused on traceability and food safety initiatives and concerns, so we have a desire to create traceability to the production sources,” Edwards says. “A lot of it is just record-keeping and allowing records to be complete.”

Because Limoneira is a vertically integrated lemon business – meaning its products are plucked from the trees, sent to a warehouse and delivered to customers under the company’s watch – it boasts full traceability of its products.

“That gives our customer base a much greater degree of confidence that our highest quality and safety is an instantly traceable product to them,” Edwards says. “In combination with that and being considered one of the leaders among sustainable producers, it puts us at the top of the list of suppliers for the customers we work with. Some of this country’s largest customers choose us over larger suppliers for the things we do in that regard.”

The Growing Middle Class
As Limoneira expands further into Asia, its ability to cater to the tastes of the ever-expanding middle class in this part of the world will help it grow. Edwards says the company has witnessed growing global consumption of lemons, especially in China and India where burgeoning economies are getting stronger every year.

Edwards says the company has seen its lemon business double in size, and Limoneira is expected to ship between 3 million and 3.2 million cartons of lemons worldwide in 2013 compared to just 1.4 million in 2010. He attributes this rapid growth to a nationwide advertising and promotional campaign called “Unleash the Natural Power of Lemons,” which introduces consumers to alternative uses for the versatile lemon.

“As we’ve begun to launch initiatives in cities in the United States, we begin to move up in the overall category of lemon consumption,” Edwards says.