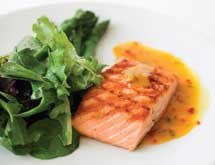 When it comes to seafood, Louisiana Foods Global Seafood Source will do whatever it takes to separate itself in the industry and deliver what a client demands. “One of our main things is that we are a full-service wholesale seafood distributor and processor, and we also manufacture products,” owner Jim Gossen states. “Everything we do is related to seafood.”

In addition, Louisiana Foods says its extensive inventory causes it to stand out when compared to its competitors. “We regularly have 20 to 30 species of fish available to sell,” Vice President Rob Allgood says. “I would guess that doubles our competition.”

Gossen and two partners formed Louisiana Foods in 1972. From its Houston headquarters, the company sources oysters and other fresh seafood from the Louisiana Gulf region.

As Louisiana Foods is approaching its 40th anniversary, it has shifted from a primary focus on products from the Gulf to include ones from further south in Latin America. The company sources from Mexico, Peru, Chile, Australia, New Zealand, Greece and Norway. Although Gossen and Allgood agree that crabmeat is the company’s calling card – which it has been processing from the beginning – its global app­roach has provided an advantage in the market.

“We originally started 30 years ago selling Louisiana products, and over the years have specialized more in seafood globally,” Gossen explains. “It’s fortunate for us that with the oil spill, the Gulf only takes up about 18 percent of what we sell today.”

Louisiana Foods does 30 percent of its business with supermarkets and 70 percent with other foodservice entities. The company delivers to the Texas metropolitan areas of Houston, Dallas and Fort Worth, and east into Lake Charles, La.

Allgood notes that the company deals with the most prestigious of customers, such as Central Market grocery chains and white tablecloth, chef-driven res­tau­rants. Louisiana Foods does work with a few mid-size chain restaurants where it handles all seafood orders. “We’ve carved out a niche with the discriminating customers,” Allgood reports.

The newest product offering from Louisiana Foods is its Ike Jime grade of fish. The company says it is truly world-class quality fish that demonstrate what Gulf fisheries have to offer. Ike Jime is taken from the Japanese name for the process used to produce sashimi. Louisiana Foods uses the same process, which must follow strict standards to earn the rating.

Upon landing, the fish are immediately rendered senseless and bled out, with a quick, low-stress slaughter essential to maintain quality. The fish are then placed in an ice slurry that is one part sea­water and three parts freshwater, which draws blood and rapidly lowers the temperature of the fish to around 32 degrees, preserving the flesh. The pro­cess takes between 30 minutes to an hour.

Ike Jime fish are segregated from nor­mal catch, and soldier-stacked in flaked ice with no one fish touching another in layers no more than two deep. Only fish caught within the last 24 hours of fishing are Ike Jime-processed, ensuring that the fish is pristine when it arrives to Louisiana Foods’ customers.

Gossen acknowledges that the company is not processing Ike Jime fish in large volumes, but is bringing “beautiful, quality fish to the local sushi bar.

“Sushi is kind of an untapped area,” he says. “It is amazing how fast it has grown between sushi bars and chefs using raw fish. It is a nice addition to the company. We have an in-house sushi chef – someone that knows what to look for, and we have Ike Jime specialists.”

One way Louisiana Foods distinguishes itself is through its “total catch” program when it comes to fishermen.

“We buy the entire catch on the boat, even if it’s shark food,” Allgood says. “We purchase and bring to market and sell the underutilized species of fish. It’s a win-win because fishermen are making more money on their total catch, and we have introduced new species into the marketplace. It helps with fish that are over-fished.”

Gossen notes that the company wants to be more like the cultures of Thailand and others around the world where the entire fish is either consumed or used for another product. “We don’t want to waste anything,” he states. “We want to put to market and try to sell the whole fish. Especially chef-driven restaurants, they want to try to use the total fish, and find a sustainable fish, which is giving more money to the boat and crew.”

In the future, Louisiana Foods will con­tinue efficiently sourcing from all over the world. “We will try to get pro­d­­ucts quicker from the water to the con­su­­mer,” Gossen stresses.