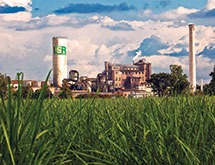 Sugar has been an integral part of southern Louisiana’s economy and culture for more than 200 years. Local cane growers and raw sugar mills generate $2.2 billion into the economy, and the industry generates an overall economic value of $3.5 billion to the state, according to the American Sugar Cane League.

Based in Gramercy, La., Louisiana Sugar Refining LLC (LSR) is the result of a joint venture four years ago between Cargill Inc. and Louisiana Sugar Growers and Refiners Inc. Its purpose was to bring manufacturing back to small-town USA and ensure the strong heritage of sugar growing and refining continues in Louisiana. “My vision was to bring back that local presence in the facility, which we have done, and we have so many people who are third-, fourth-, fifth- and even sixth-generation farmers and sugar refinery employees,” General Manager and CEO Larry Faucheux says. “I am a third-generation employee. My father retired from the site after 52 years of service.”

Today, LSR sources local, non-GMO sugarcane from more than 277,000 acres of land and eight mills located within 100 miles of the refinery. One of the company’s goals is to help ensure the growth and stability of Louisiana’s sugarcane farmers and integrate more than 800 growers into the industry’s economic structure. The company refines the locally sourced sugarcane into granulated sugar, liquid sucrose and molasses for industrial and foodservice customers. “What separates us is that we are 100 percent United States sugarcane and we utilize small-town local communities as an integral facet of our daily operations,” Faucheux says. “We service every major user of sugar on an industrial and commercial basis.”

Building Excellence
LSR built a $190 million state-of-the-art facility on the grounds of an old sugar refinery that was built in 1902 and supplied granulated sugar to the United States. LSR restored 15 of the original homes built on the site and converted them into offices to maintain some of the history while moving forward. “LSR is a good blend of the old with the new,” Faucheux says. “It’s the newest sugar refinery in the world and the most automated refinery that’s ever been built; yet, it sits on a location that’s been refining sugar since the 1900s.”

The 207-acre facility is capable of refining two billion pounds of raw sugar annually, which represents more than two-thirds of the sugar grown in Louisiana. Siemens was contracted in March 2011 to equip the refinery with electrical and control components. Siemens’ automation division installed its PCS 7 distributed control system and smart motor control centers. LSR was later awarded the Siemens Customer Excellence Award for its design and use of the automation system. “LSR is the most automated sugar refinery in the world and it’s a big responsibility for LSR to provide the capabilities needed to continue the sugar cane industry in Louisiana,” Faucheux says.

LSR has operated for more than 700 days without an OSHA-recordable or lost-time incident. The company maintains a safe facility by hosting community safety meetings, performing health and safety audits, and teaching safe operating procedures that are practiced daily. “LSR employees are trained with safety in mind and an understanding that nothing we do is worth risking an injury,” Faucheux adds. “Our employees are empowered to do the right things at the site and are given the ability to make those choices. We expect everyone on site to have a voice on the daily operations and it shows in our results.”

Social Responsibility
LSR works daily to uphold its three pillars of sustainability: environmental, community and economic. Its environmental initiatives include water conservation, condensate recovery, waste minimization, recycling and resource minimization. “Through recovering condensate for use in the boilers, we have reduced our water intake by about 200,000 gallons per day,” the company says. “That is enough to fill 10 swimming pools every day.”

The company’s recycling program extends across the facility and includes a multitude of products ranging from lab equipment and cartridges to used oil. LSR continues to look for ways to reduce waste and repurpose materials for future use. “Our recycling initiatives have removed, on average, one-third of our waste from entering the solid waste stream,” Faucheux says. “We look at the traditional things we have done as just one of the pillars of sustainability.”

As community stewards, LSR employees have helped develop projects throughout the community, including implementing a recycling program at the local elementary and high schools and donating land and equipment for a new playground. The company developed the LSR Foundation Scholarship for Lutcher High students and also offers paid internships for college students to receive hands-on work experience. “We are developing a high school curriculum that will allow high school graduates to go straight from school to work here,” Faucheux says. “Two or three students from the class will be offered positions in the facility on graduation day.”

LSR not only pays attention to the community’s needs, but its employees’ needs, as well. The company’s Employee Assistance Program offers counseling, support and benefits to promote its employees’ wellbeing. LSR also provides annual flu shots, wellness exams and hearing tests. Employees are sponsored and encouraged to participate in marathons, half-marathons, and 10K and 5K races.

Economic stimulation is the third pillar of sustainability at LSR and focuses on supporting local businesses, hiring from within the community and giving back. More than 70 percent of its 350 employees live within 15 miles of the refinery. “Engaging and empowering employees not only changes the culture of an organization, but also leads to significant progress,” Faucheux says.

LSR plans to continue growing by providing sugarcane farmers with a home for their products. The company follows through on this by installing automated equipment in growers’ facilities to build some of the best and most sophisticated mills in the world, Faucheux says. “The refinery has a local presence in the community and we share maintenance resources with them to make growers more efficient and better at what they do,” he adds. “In doing so, LSR will continue to provide its customers with a place to go to get a truly USA-made, natural product. LSR was inspired by an awareness of culture and tradition, and fueled with an enthusiasm for growth, change and improved performance.”