Back to Profile Gallery > Love & Quiches 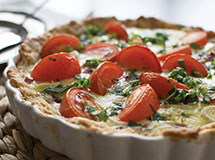 Love & Quiches Gourmet began in the early 1970s with two Long Island, N.Y., housewives, a family kitchen and local businesses with an appetite for quiches. Neither woman knew anything about running a business or could even tell you why they chose quiches, but it worked.

“I had a partner, Jill, a truly close friend, when we started and we were both very good cooks,” co-founder Susan Axelrod remembers. “She always wanted to do ‘something’ and talked me into going into business. Why we chose quiches? We really don’t know. It was an accidental business. Cooking was the only credential we had.”

Selling their quiches to local supermarkets, Axelrod and her partner made about $19,000 in their first year of business, but spent about $25,000. It was after their first year that the pair met Marvin Paige, a New York City restaurant manager who would later become Axelrod’s mentor. Paige knew a lot about the industry and helped Love and Quiches, which was how the name was written until 2012, get on local restaurant menus as a lunch special. “It sold so well that our quiches became a permanent menu item all over the city,” Axelrod says. “We didn’t invent the quiche, but we put quiches on the map and really started that trend worldwide.”

Soon after Love and Quiches became a fixture in restaurants all over the New York metropolitan area, the quiches weren’t enough. Customers started asking for pies – pecan, in fact – and that became the first line extension of the company. Cheesecakes soon followed. The company had grown by 1974 and was too large to operate from Axelrod’s kitchen. Love and Quiches moved into a storefront and Axelrod’s partner soon left the business because it was growing into much more than the hobby she expected it to be. “I bought Jill out for her original investment – about $6,000 – and from there I built my own business,” Axelrod adds.

An Oddity
Axelrod built Love and Quiches one step at a time and each move expanded her reach. “I was a pioneer, an oddity at the time,” she remembers. “I was a suburban housewife in the manufacturing industry. Even if it was bakery products, it is still manufacturing and it was still a man’s world.”

Her journey was not without the jealousy and resentment of rivals, but Axelrod says she got through it – not only with love and quiches – but also because there wasn’t time to think about it. Over time, Love and Quiches outgrew Axelrod’s kitchen, her garage, a small local storefront and its first 4,500-square-foot factory. It was a one woman show at the time as she was the baker, buyer, salesman, porter and delivery driver.

By 1980, Love and Quiches had moved into its current 30,000-square-foot facility in Freeport, N.Y., and sales reached $3 million. “It became a real business and I left the gossip and everything else behind,” she adds. “I learned I needed people around me, so it became a family business with a succession plan in place.”

Love and Quiches really took off in 1979 when a national chain restaurant wanted its Fudgy Brownie Pie to sell as a limited-time-offer (LTO). “I think our company did one of the first industry LTOs, also,” Axelrod says. “They wanted to know how quickly I could prepare 6,000 cases. At the time our biggest order was maybe 300 cases. We fell off our chairs.”

After picking their chins up off the floor, Axelrod and her team got to work and delivered the 6,000-case shipment in six weeks, just when the chain requested it be delivered. Love and Quiches’ brownie pie became so popular that a caterer in New York City called to order the dessert for a dinner party thrown by Jackie Onassis. Thinking back to the long road she has traveled, Axelrod says she went from “a clueless suburban housewife to a business person, and it all happened in only seven years.”

Today, Love & Quiches Gourmet – its new name since 2012 – is a global frozen foods company that practices just-in-time and lean manufacturing. The company recently began producing more natural products and is moving towards becoming more branded rather than a behind-the-scenes supplier. “We want to make Love & Quiches Gourmet a little more dominant so we have a little more power within the industry,” Axelrod says. “If you create demand, it’s harder for companies to say no.”

Motivational Maven
Starting out as a businesswoman in the 1970s wasn’t exactly a piece of cake for Axelrod, having no experience and working hard to prove she could make it in the world of manufacturing. To inspire others to start their own business or other journey, Axelrod wrote With Love & Quiches: A Long Island Housewife’s Surprising Journey from Kitchen to Boardroom, a book chronicling her 40 years building the company from nothing. “It’s a good story, a page turner and offers great advice,” she says.

Some advice Axelrod gives in her book is learning to measure everything because, as she says, “You cannot manage what you cannot measure. You can’t think what your margins are, you have to know.” She also says a big challenge to overcome is learning to accept that you can’t be all things to all people. “Stick to your core competencies,” she adds. “Try not to be too panicked by the competition either. See what you can offer as a point of difference. There is enough business for everyone.”

Axelrod also knows a good leader knows what she doesn’t know. “My greatest achievement was building a world-class organization,” she says. “It’s not just about having the right people on the bus, it’s about getting them in the right seats. Get people around you that are more skilled than you in their particular area. Our employees are our greatest asset and the most valuable thing we have. They perform the ‘meat and potatoes’ in everything we do. They get the product out and watch the quality. I can’t do everything and be everywhere. The greatest challenge is learning to step back.”