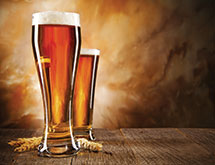 Founded in 2008 and pouring its first product in early 2009, Lucky Bucket Brewing Company has worked to create memorable brews and pay respect to the history of brewing beer. Having taken its name from the glory days before kegs and bottles were available and beer drinkers needed to visit a local brewery and fill up a bucket, Lucky Bucket is slowly but surely making a name for itself and its products.

Lucky Bucket is based out of an 18,000-square-foot facility in La Vista, Neb., where it has six three-story fermenting tanks and offers a tasting room and tours to the public. The company is part of the craft beer boom that has taken off in recent years around the country, and its goal is to make the best beer it can possibly make. In its first year, the company produced around 400 barrels, growing to about 4,000 barrels in year two. Last year, the company was around 7,000 barrels and is aiming to do approximately 10,000 barrels this year.

Outstanding Products
The company can trace its beginnings to the time-honored tradition of home brewing. Searching for unique flavors through experimentation eventually led to creations that Lucky Bucket’s founders felt it had to share with the world. Lucky Bucket’s first release was the Lucky Bucket Pre-Prohibition Lager. A handcrafted session beer, it had been in development for years and was first poured in January 2009 at a small pub in Omaha, Neb.

It is twice-filtered and dry-hopped with a blend of West Coast hops and has an ABV of 4.5 percent and 20 IBUs. It has been recognized for its quality on several occasions, having taken home gold at the L.A. International Commercial Beer Competition in 2010 and silver at the World Beer Championships and L.A. International Commercial Beer Competition in 2009.

Since it brewed its first batches of Lucky Bucket Pre-Prohibition Lager for the public, the company has been evolving and growing. Today, Lucky Bucket products can be found in locations in Nebraska, South Dakota, North Dakota, Iowa, Minnesota and Tennessee. Lucky Bucket has worked to share its beer with pubs and distributors to expand its reach while continuing to develop new products. The company is working to help its distribution and retail partners to expand its reach and to support its business partners.

The company says its Lucky Bucket Original American IPA is created by beginning with a “nice malt bill” with a “mountain of hops added later.” After boiling, hot wort is fired through a hop back, a four-barrel stainless steel tank filled with raw flower Amarillo, Centennial, and Cascade hops. This is followed by additional dry hopping in the fermenter, creating what the company says is a well-balanced West Coast-style IPA with hop flavor and aroma. Lucky Bucket Original American IPA has 65 IBUs and 6.3 percent ABV, and it took home the silver at the World Beer Championships in 2010.

Another Lucky Bucket creation is Certified Evil, which came about through a 2008 collaboration project with Todd Ashman of Fifty Fifty Brewing in Truckee, Calif., and Matt Van Wyk of Oakshire Brewing in Eugene, Ore. The brewers began working to create a dark Belgian strong ale.

A barrel-aged release, the new Certified Evil blends Certified Evil aged in Cabernet barrels for one year with a younger batch of oaked, aged Certified Evil. The company describes it as having a vibrant yet smooth and elegant taste. The recipe includes complex sugars including turbinado sugar, molasses and honey. Certified Evil was honored with a silver award at the World Beer Championships in 2009.