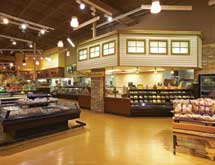 If Arthur Mackenthun could see what Mackenthun’s Fine Foods has become today, he would likely be astonished by what he found. Kim Mackenthun, Arthur’s grandson and president and CEO of the company, says his grandfather’s original store in Waconia, Minn., was a simple meat market known for its high-quality sausage.

“Back in those days there was no such thing as a full-service grocery store,” he says. When his father, Marvin, took over the store in the 1940s, he added a full line of groceries.

Today, however, it might be easier to list the things Mackenthun’s Fine Foods doesn’t offer customers. In addition to being a full-service grocery store, Mackenthun’s features a bakery, a deli, a pharmacy, a bank, dry cleaning and catering. Plus, the store still makes its famous sausage. “It’s about every service you can imagine in an upscale grocery,” Mackenthun says.

Mackenthun’s services Waconia as well as several surrounding communities on the outskirts of the Minneapolis metropolitan area. The competition can be fierce, with national chains such as Walmart and Target in the mix, as well as upscale convenience stores that compete on price for staples. However, Mackenthun says the store thrives because of the extra effort it is willing to take to make sure customers are satisfied. That’s something that has been a part of the company’s philosophy from the very beginning, he says.

“We do the things that my father and grandfather did before me,” Mackenthun says. That means providing a higher level of personalized service than many national retailers are willing or able to give, says Jessa Theis, marketing director and Kim Mackenthun’s daughter. Her brother, Jaime Mackenthun, also serves the company as vice president, and both are full partners in the company.

“We bag groceries, and if our customers have a request for any item, we’ll do our best to find it,” Theis says.

Mackenthun adds that the store is built around the idea of the “theater” of retailing, providing customers with more than just quality products at competitive prices. For example, the store’s bakery section is designed around an area where customers can watch cake decorators work. “We try to make it as much of a Disney World-type of grocery store as we possibly can,” he says.

As a local retailer for more than 90 years, Mackenthun’s Fine Foods has become part of the community, and the store strives to encourage that sense of togetherness. The store regularly holds events in its parking lot such as its rib cook-off championship. “It’s kind of a get-together for the community,” Mackenthun says. “It’s quite an event.”

The store also has embraced social networking as a way to enhance the community aspect, using Facebook as a method of keeping customers informed about what’s going on at the store. “We keep our customers updated on what local produce is coming in daily on Facebook,” Theis explains.

Another user-friendly feature Mackenthun’s Fine Foods has added recently is its loyalty program. Mackenthun says the program rolled out with a “pump perks” offer that rewards customers for buying certain products with discounts on gas from partner service stations. Part of the program asks customers to provide the store with their e-mail addresses. Mackenthun says that once it has enough addresses, the store will begin offering prizes and other incentives for its best customers by tracking their purchases.

Offering such incentives has become more important than ever, as customers look for ways to stretch their budgets during the recession.

The store’s quarterly Dollar Days sale is its largest sale, and has become known throughout the area for its deals.

“That sale in particular will bring people from 25 miles away,” according to Mackenthun.

Theis says Mackenthun’s Fine Foods enjoys support from the local community because of what it means to them. “We have a small community, and that really means a lot to people that we’ve been family owned,” she says.